The Gaming 5 has a lot about it if we factor in the high volume of connections and inputs on a sub $200 offering. Physically Gaming 5 has support for both 2-way SLI and 3-way CrossFire multi-graphics configurations, although theoretically there is support for up to 4-way SLI and 4-way CrossFire with GPUs featuring two GPU cores on a single PCB. GIGABYTE is known for emphasizing its onboard audio solutions on their range of upper-end boards, but the AX370-Gaming 5 features dual Realtek ALC1220 codecs with the second designed specifically for the front panel audio.

The Gaming 5 has a wave of customisable RGB LED zones across multiple areas. Going from left to right, there is are subtly placed LEDs in the plastic audio component cover, and next to this are a couple of single LEDs placed at either side of the chokes in the VRM area. In the center, and under each of the two PCIe x16 3.0 slots, we get three LEDs forming a strip directly under the slots. On the right-hand side, there is an array of lighting in between the memory slots, and an LED bar on the right using a plastic pattern that can be replaced. 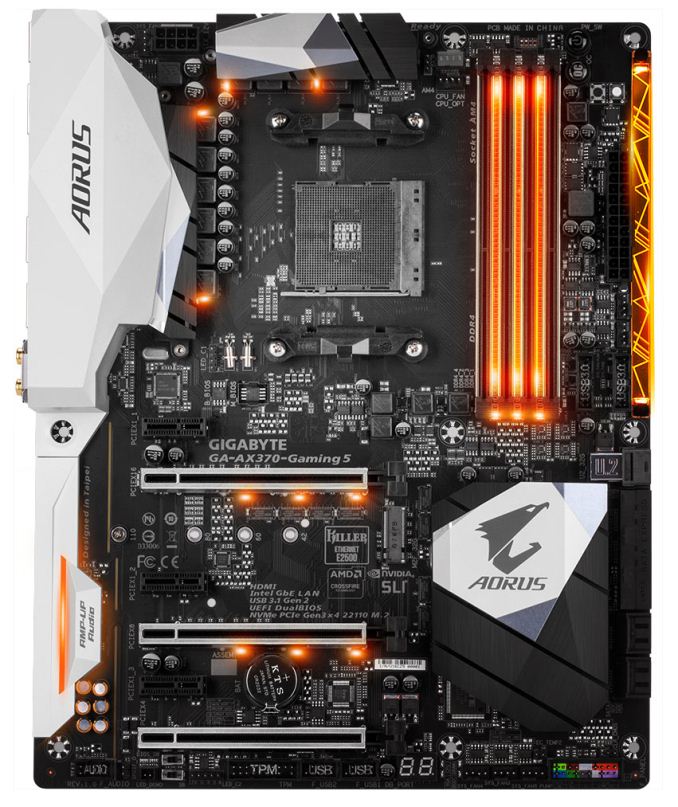 The top right-hand corner of the board features (what I like to call) 'a basic overclockers toolkit', and consists of a power button, a one-click OC button and small reset CMOS and system reset buttons. There also are five 4-pin PWM headers (including CPU) on the board, with two high-powered fan headers for users with water cooling pumps. The audio area has the pair of Realtek ALC1220 codecs, for both rear and front panel audio, which uses gold Japanese Nichon audio capacitors. Nippon Chemi-Con 10k solid capacitors are used elsewhere on the board and are black in colour.

Aside from the single and centrally located PCIe x4 NVMe M.2 storage slot, the rest of the storage options can be found on the lower right-hand side of the board. There are eight SATA 6Gb/s ports as well as two SATA Express ports. To the right is a single U.2 port as well. 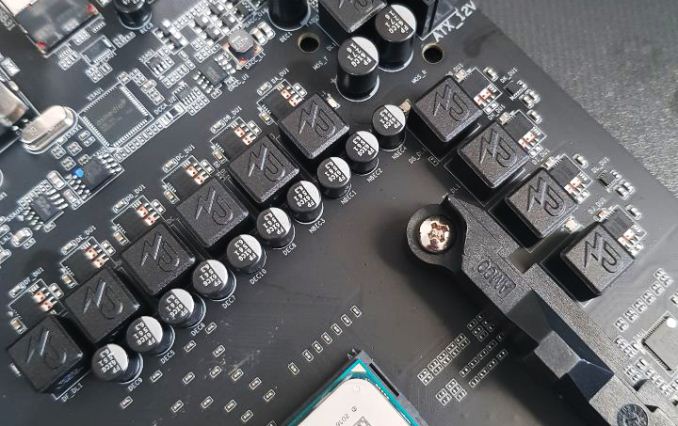 With the power delivery, GIGABYTE is using a 10-phase digital power design. The VRM is controlled by am International Rectifier IR35201 digital PWM controller, running in 4+2 mode, with an IR3599 doubler bringing the count to 8+2. Supplementing the VRM controller, the board utilizes the International Rectifier IR3553M 40A MOSFETs and GIGABYTE's own designed ferrite core chokes. 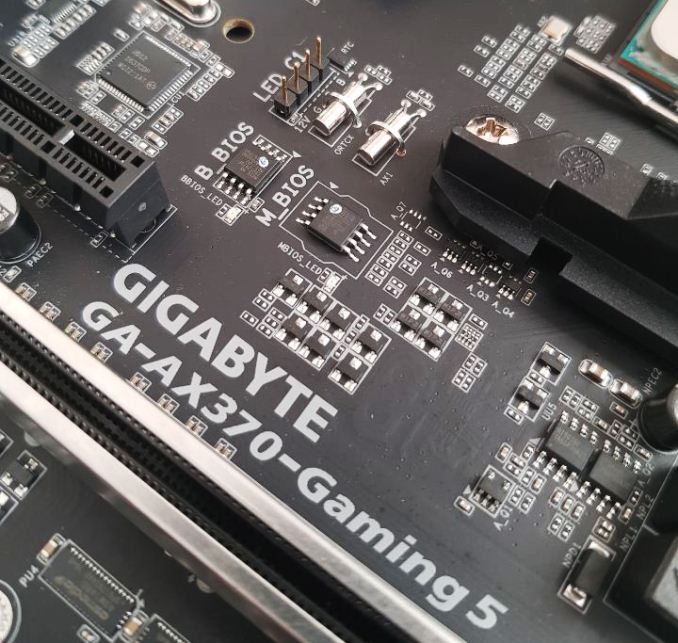 One of the more premium features on the Gaming 5 is having a dual BIOS system. The BIOS in use can be selected via a switch on the board. At the bottom of the board just located below the bottom PCIe x16 slot are two switches which allow the user to change the configuration of the BIOS implementation: when switched into single mode, each of the two BIOS chips can run different BIOS versions (which is handy for overclockers who use different BIOS versions depending on the CPU model). When selecting the dual BIOS mode, they run in a mirror configuration; it reflects the image across both of the BIOS chips for redundancy purposes.

On the rear panel, there is single USB 3.1 Gen 2 Type-C port and single USB 3.1 Gen 2 Type-A port which are supported via the ASMedia ASM1143 USB controller. Also present is an additional two USB 3.1 Gen 2 type-A ports as well as six USB 3.0 ports and 3.5mm audio jacks for the onboard audio with S/PDIF output. A lot less emphasis has been placed on the onboard graphics as a there is only a single HDMI 1.4 output, with GIGABYTE showing its intent to market this board primarily to those planning on to use discrete graphics. There are two physical network ports, using the Rivet Networks Killer E2500 chip and the Intel I211-AT controller. Also present is a combination PS/2 port.