Gaming laptops generally fall into two categories based on their size, which is usually 15.6 and 17.3 inches. The larger laptops offer more space for extra cooling, but they can be so large that its difficult to move them around. The Acer Nitro 5, at 15.6-inches, is surprisingly svelte (especially for the price), but even then it is still 1.1-inches thick and weighs just under 6 lbs. 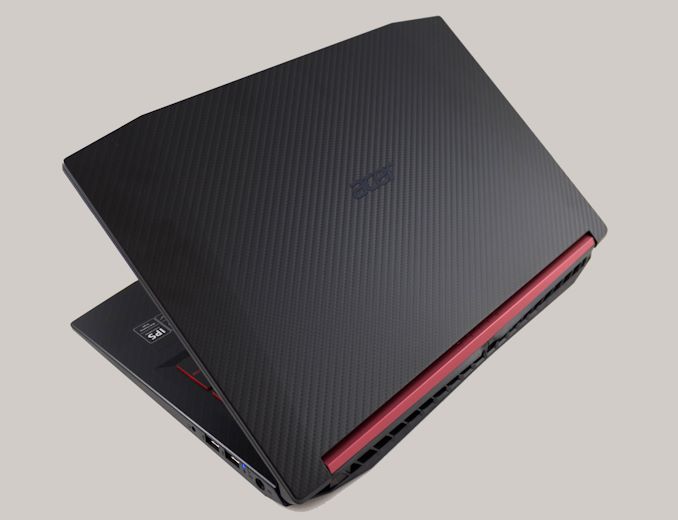 One of the easiest ways to save some cost is on the chassis, and the Acer Nitro 5 is made completely out of plastic. What the company has done to improve the look and feel though is to incorporate a faux carbon fibre weave into the design, which covers the top of the laptop, as well as the keyboard deck. It provides some much-needed texture on the top of the laptop, and provides a nice look and feel to the device without being too over-the-top. For contrast, there’s a red hinge bar, and the keyboard backlighting is red as well. Due to the budget nature, there’s also no thin-bezel design that we’ve seen on even some gaming laptops, so this is a large and wide laptop for 15.6-inches of screen space. 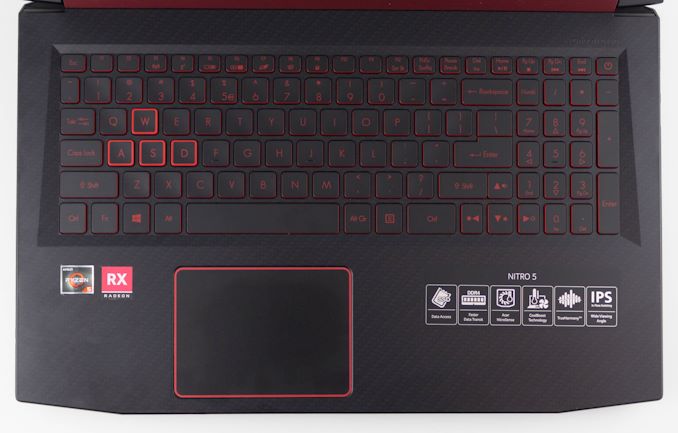 The large size does allow Acer to cram in a full keyboard with number pad on the right. 15.6-inch devices with a number pad are kind of a mixed bag though, since the keys tend to get pretty crammed together, and this model is no exception. The lack of a full size zero key also makes transitioning to this number pad less than ideal, but it is there if you need it. The other tradeoff is that it pushes the rest of the keyboard off center. Acer also commits a faux pas by putting the power button in the keyboard, which means you may accidentally turn off the computer while typing, although this is mitigated by it being above the number pad and not near the keys you’d use most of the time.

As for key feel, this is another area where Acer has saved some room on the bill of materials. The keyboard doesn’t offer very much travel, and the keys are quite slippery and don’t offer much tactile response either. With gaming laptops offering quite a bit more Z height than something like an Ultrabook, it would be nice to see a keyboard with a bit more travel here.

Luckily the same can’t be said of the trackpad, which is a generous size without being unwieldly, and the trackpad offers an incredibly smooth surface, and detects taps, two-finger scrolling, and more, with zero issues. Considering the sad state of trackpads on many laptops, this was unexpected considering the value segment Acer is targeting.

Acer offers two USB 2.0 ports on the right side, coupled with the barrel power connector and headset jack, and the left side offers a Type-C USB 3.1 Gen1 port, along with a USB 3.0 Type-A, HDMI, and an SD card reader. The RJ45 connector has a hinged section on the bottom to allow it to expand to full size when a network cable is plugged in. It can be a bit of a struggle to get the connector back out again though, but if you’re using the laptop on a desk, it’s still worth having the Gigabit connection.

Overall the design is very nice. The low-end material for the chassis is spruced up with the carbon-fibre look, and the chassis itself doesn’t flex or bend at all if you pick it up on one size. The Acer Nitro 5 doesn’t offer the premium look and feel of some of the top gaming systems, but it also doesn’t come with their price tag.