We’ve mentioned already that the 4S is more of an evolution of the CDMA iPhone 4 than the GSM/UMTS iPhone 4, and where that’s most obvious is again is its cellular architecture. When we reviewed the GSM/UMTS iPhone 4, we investigated and explained why its design made it especially prone to unintended attenuation when held a certain way. Apple remedied the situation somewhat by giving away free cases, but only in the case of the CDMA iPhone 4 was the fundamental design issue remedied by adding receive diversity with a second cellular antenna at the top.

The 4S builds on this architecture by incorporating the same diverse receive path with two U shaped antennas at top and bottom, and adding transmit diversity to the equation. I’m being a bit fast and loose with the term “diversity” here, since the 4S cannot transmit simultaneously on both antennas, but rather switches between the two antennas based on which has the least receive fading. Receive diversity is a bit more interesting to explain, since the 4S appears to be able to dynamically decide whether to select one of the two receive paths (in the case that one is much more faded than the other), or combine the two (using something like maximal-ratio combining) and get a better quality equivalent signal.

When I talked about the CDMA 4’s receive diversity scheme, I went into detail to prove that this feature was present. With the 4S, these diversity features are much easier to talk about because Apple has been directly forthcoming about the feature this time. In addition, the transmit switching part of the equation is discussed at length in Apple’s FCC disclosure (since the FCC is interested in scrutinizing transmitters), and even includes a nice diagram.

The device is capable of switching between the Primary/ANT1 and Secondary/ANT2 Antennas. The antenna switching is implemented with a physical, "break-before-make" switch such that only one antenna can be used for cellular transmission at a time.

To re-state the evolution that Apple has taken with this design, the GSM/UMTS 4 had one transmit and receive chain, the CDMA 4 added a second receive chain for diversity, and the 4S now has two receive chains and the ability to switch between two transmit chains. The result is that the phone no longer is prone to fading on either the forward or reverse link due to being held near the feed points for one chain.

To be totally thorough, you can immediately see that the 4S still incorporates the same overall design however, complete with a a U.FL connector at the bottom and a feed cable that runs up the side of the PCB to the top. From here it obviously terminates somewhere that makes contact with the top antenna.

When we saw that the CDMA iPhone used Qualcomm’s MDM6600, we made an educated guess that the next device would likely be based on the same baseband. It turned out that this was pretty close to the case, as the iPhone 4S uses an unannounced Qualcomm MDM6610. 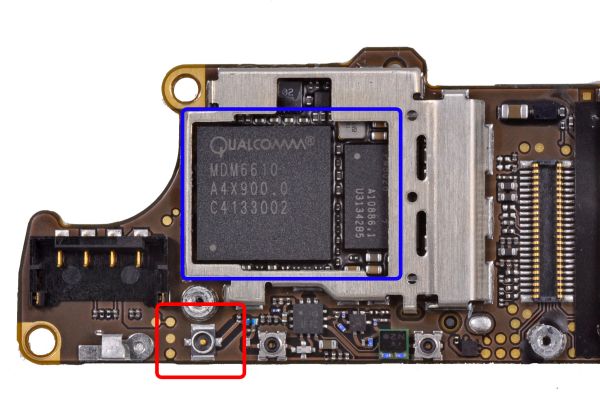 There are some immediate differences that stick out about MDM6610 versus MDM6600. First, 6610 doesn’t appear to include an internal transceiver, unlike MDM6600 which previously included a transceiver in its package. MDM6610’s package is correspondingly smaller, at 10x10 mm, compared to 6600’s 9.8x12.2 mm, but again you have to factor in the fact that the transceiver isn’t inside that package anymore. Based on those facts and the state of 28nm maturity, it’s almost certain that MDM6610 is still a 45nm part. The 4S uses Qualcomm’s RTR8605 IntelliCeiver transceiver for cellular RF management and also for GLONASS/GPS. We’ve seen RTR8600 before, and RTR8605 appears to just be an improvement upon that part with the same functionality. In fact, inside the MDM6610’s AMSS it’s just referred to as RTR8600.

Qualcomm isn’t ready to talk at all about MDM6610, but I’ve done a little digging and know more about this part. First off, it’s referred to as codename “Trek” inside the Qualcomm AMSS (Advanced Mobile Subscriber Software), whereas MDM6600 in the CDMA iPhone was referred to as “Phoenix.” When we first saw that the 4S was using a baseband that hasn’t been announced, we assumed it was an Apple specific one-off. However, after some digging I uncovered a reference to a GSM/UMTS only part as well: “MDM6210MDM6610”. For those that aren’t familiar, the 2 connotes GSM/UMTS compatibility, 6 adds 1x/EVDO. Apple appears to have secured MDM6610 exclusivity for the time being, but I expect we’ll see a more formal announcement of the MDM6x10 family down the road. This is pretty much par for the course for Apple when it comes to component sourcing.

MDM6610 also appears to inherit all the air interfaces that MDM6600 had, including WCDMA/HSPA+ with HSDPA 14.4, HSUPA 5.76, GSM, CDMA 1x/EVDO (up to Rev.B, though Apple notes only A is used at present), and finally GPS/GLONASS. Superficially, there don’t appear to be any major differences beyond using an external transceiver to accommodate diversity and transmit switching. In addition, the 4S contains all the same bands as the GSM/UMTS iPhone 4.

I was initially worried that Apple would go the same route that it did with both iPhone 4 launches and initially not include FieldTest. Thankfully, the 4S includes FieldTest right out of launch, which works for both CDMA and GSM/UMTS provisioned 4Ses. 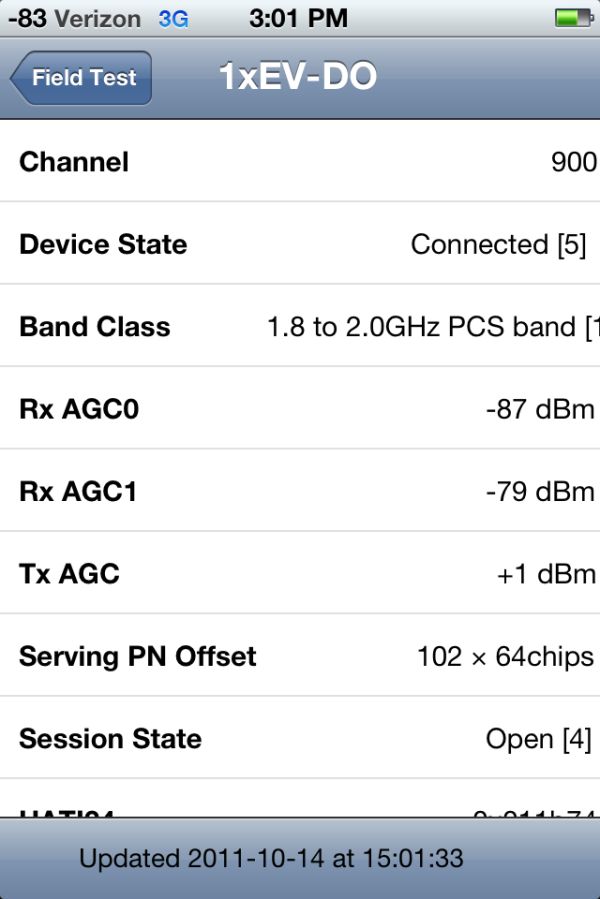 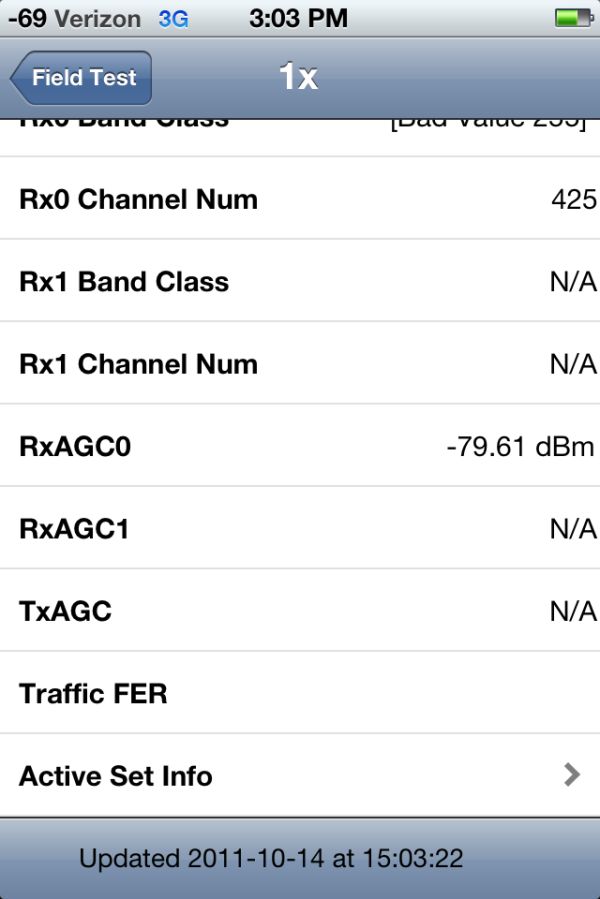 There’s a corresponding difference in the interface for the two modes. On CDMA iPhone 4S mode, there are tabs for 1x and EVDO, and Rx signal strength fields for both receive paths, as well as the current transmit power. What’s interesting here is that when using the 4S in CDMA mode, you can see the receive strength change for each antenna when held. 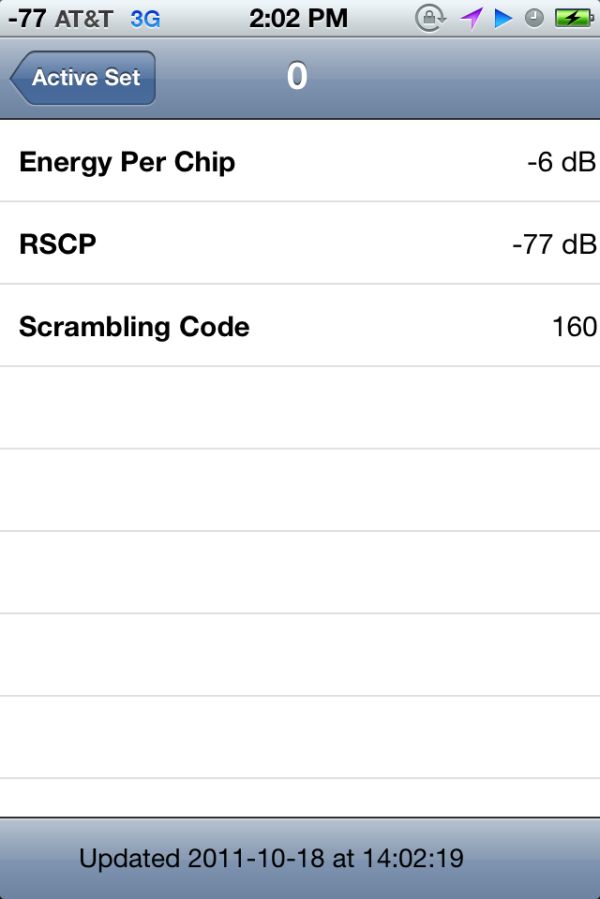 On the GSM/UMTS provisioned iPhone 4S, you don’t get individual receive strength for each chain, instead just the effective RSCP from either the selected chain or combined. If you grip the phone while watching this, you can sometimes watch RSCP race to –130 dBm and then switch entirely to the other antenna and race back up to an acceptable number. As a reminder, to get into FieldTest dial *3001#12345#* - you can then keep numerics instead of bars in the top left by force quitting FieldTest after launching it (hold down power/lock until power off appears, then hold the home button).

So how does the 4S do in our actual attenuation testing? Very well actually. I watched the RSCP of one NodeB and held the 4S all the same ways we’ve done since the 4, recorded a bunch of data, and averaged it together. What we’re measuring here is reported in dBm, and less attenuation is better (0 dBm = 1 mW).

When we reviewed the CDMA iPhone 4, I made mention of the fact that this was the first iPhone 4 I felt comfortable using without a case. This same confidence continues with the 4S, which is in practice completely usable without a case, unlike the GSM/UMTS iPhone 4. Since launch time, Anand and myself have been using our 4Ses without cases, and the difference is dramatic.