When I started testing these two systems from Puget Systems I honestly wasn't prepared for the kind of tug of war that would occur. Fundamentally, the expected results are on the page: the Intel CPU outclasses the AMD APU at every turn, while AMD's integrated graphics hardware thoroughly outclasses Intel's. I'm not going to lie either, the results are about what you'd expect. What impressed me was just how wide the gaps were. Take a look. 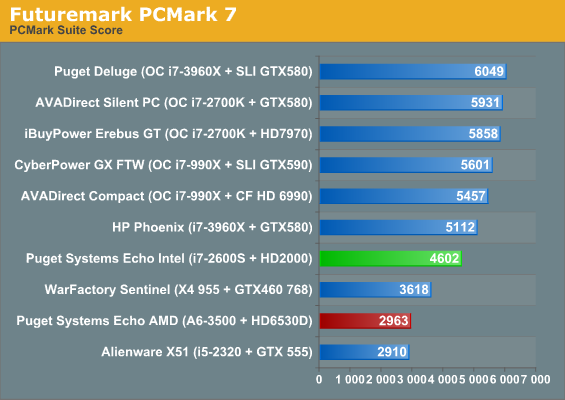 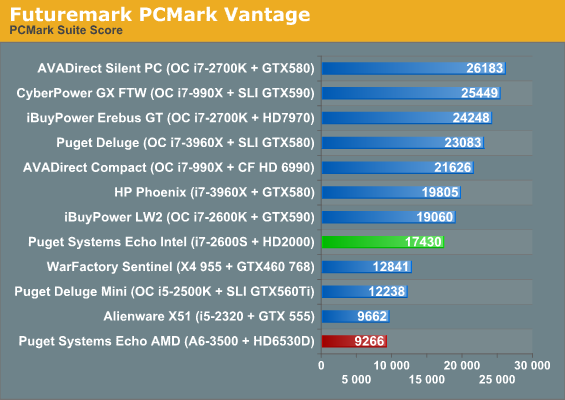 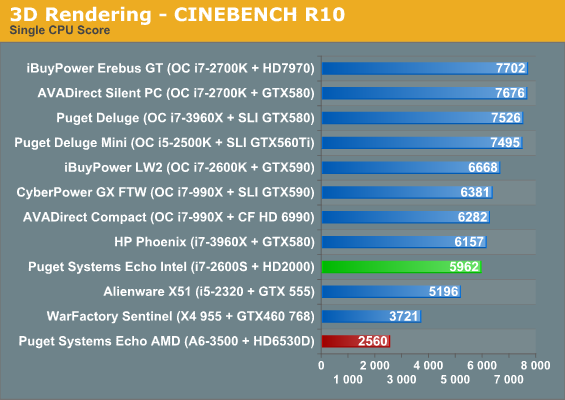 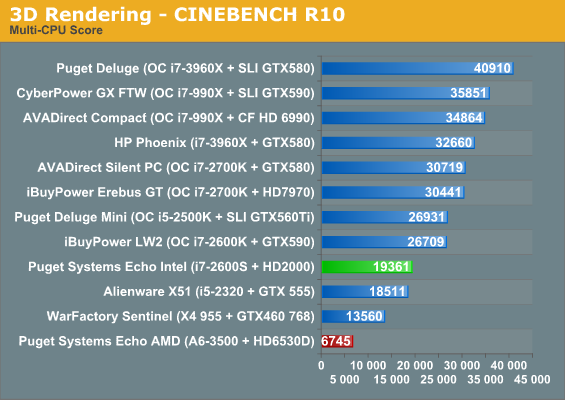 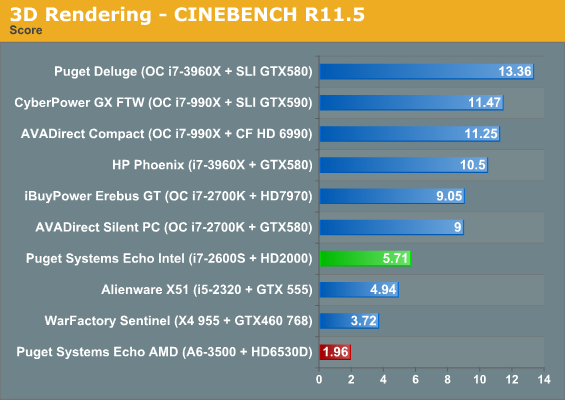 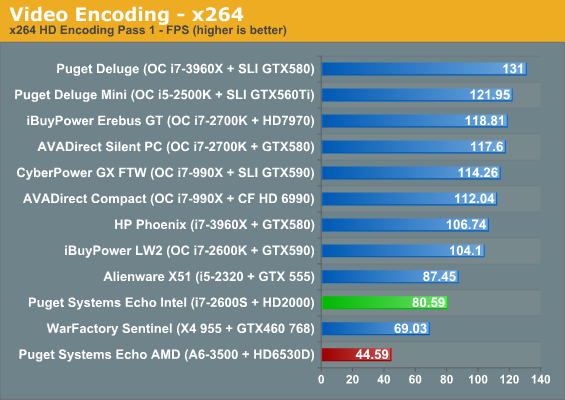 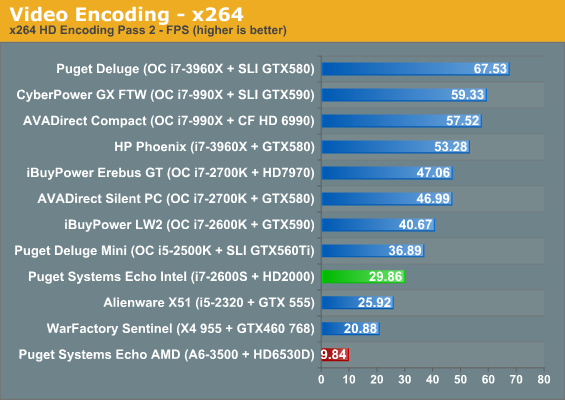 While the A6-3500's CPU performance would certainly be fine for a notebook, it's absolutely lousy on the desktop. Granted much of our competition is pretty unfair, with overclocked systems abounding, but look at how badly it even struggles against a last-generation Phenom II X4 955, much less the Intel Core i5-2320 in the Alienware X51. The i7-2600S is consistently two-to-three times faster in roughly the same power envelope.

To be fair, though, these results need to be framed in a more meaningful way than just "the A6-3500's CPU is dog slow." We need to consider the environments in which these systems are going to be used, and at the risk of sounding like an AMD apologist, I don't see many situations where the Intel chip's mammoth lead on the A6-3500 is going to be relevant. The A6-3500 is fine for basic Photoshop work, and neither of these systems are really ideal for serious video editing, where you need a much faster storage subsystem and CPU/GPU than either can provide either internally or externally.

Where a computer is much more likely to see frequent (if casual) use is in trying to run games, and here's where things take a turn. 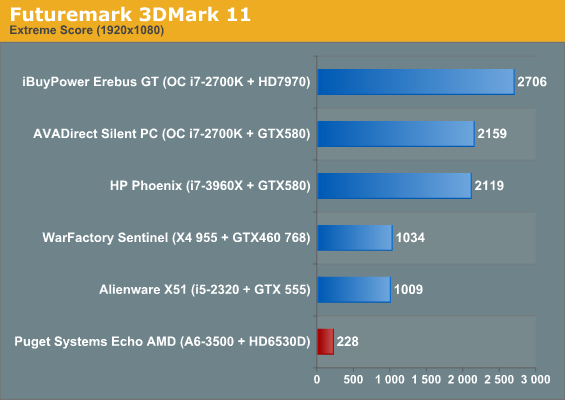 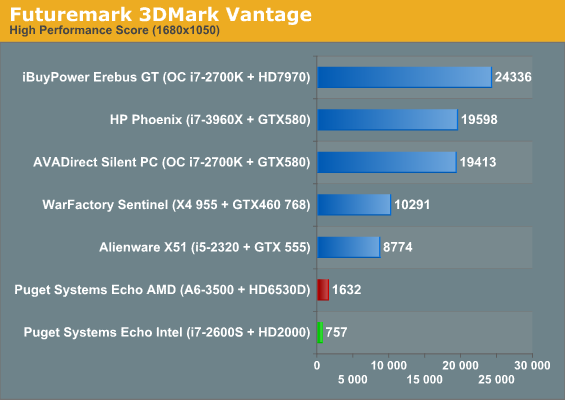 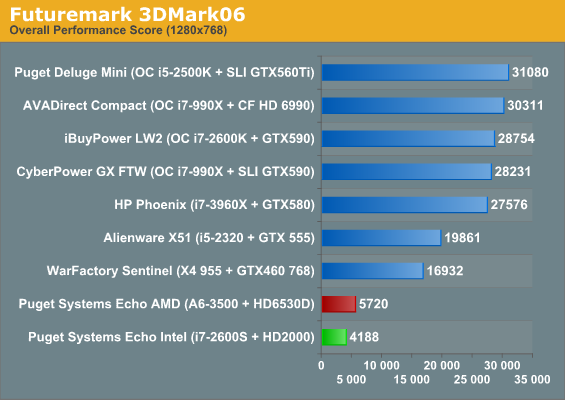 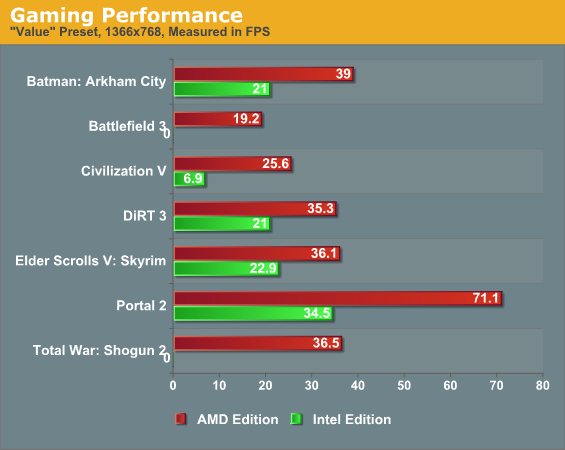 The Intel Core i7-2600S with its crippled IGP can't even run two of our benchmarks, and only produces playable performance in one of them: Portal 2, with its ancient (albeit updated) Source engine. Meanwhile, the Radeon HD 6530D inside the A6-3500 can stretch its legs and deliver playable performance across every game except Battlefield 3, where a dip in resolution or settings will render that game playable as well.

Granted, these are conservative settings at a relatively low resolution, but the point remains that if someone wants to play a game on the A6-3500, they can, and reasonably comfortably. I've seen someone suddenly decide they want to try and play a game only to discover their system's integrated graphics can't handle it at all, and forums are rife with threads of people asking how to upgrade the graphics of their cheap desktops or their notebooks being met with the same answer: "you're screwed." With larger desktop systems, it's a different matter, but for mini-ITX and laptops you have to be prepared to live with whatever graphics the system includes from the factory.