I've used Logitech gaming keyboards with varying degrees of success; one of the primary reasons I liked Corsair's K90 keyboard so much was the way it abstracted the gaming hotkeys away from the keyboard itself by lowering their height, allowing me to touch type the keyboard conventionally while being able to feel for the configurable keys if I needed them. Logitech's older G10, G11, and G15 keyboards were a bit more fraught; there were hotkeys on both sides of the keyboard, and they were very easy to accidentally hit. 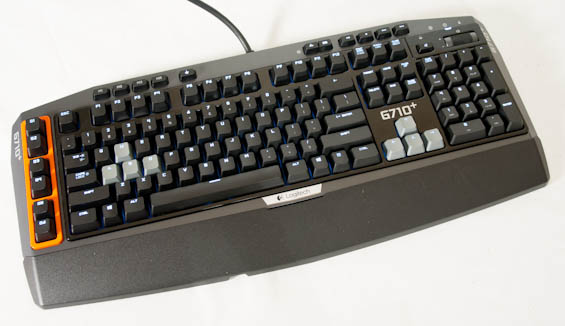 With the G710+, Logitech has essentially learned from their previous efforts and produced something that's arguably very distinctive and well thought out. The G710+ feels like it has a lot more thought and pragmatism put into its design than their earlier, in some ways flashier designs. More than that, they seem to have heard many of the criticisms levelled at other keyboard manufacturers, particularly Corsair. If you kept up with the K90 review, it won't take you long to see where. 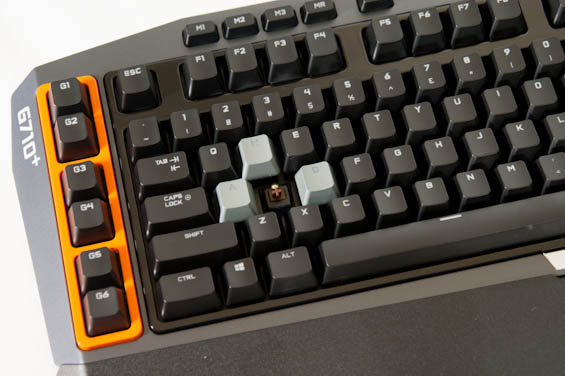 First and foremost, every key on the G710+ is mechanical except for the half-height controls/toggles at the very top of the keyboard. Logitech's rep was amusingly unforthcoming about which switches the G710+ employs, but that was easy enough to discern with two seconds and a keycap remover: Cherry MX Brown. It's an interesting choice, made more interesting by two wrinkles. First, the keyboard is entirely backlit with individual white LEDs under each key, and the LEDs can have their brightness adjusted in two separate zones (WASD/arrow clusters and the rest of the keyboard) using the toggle buttons at the top of the keyboard.

Second, while mechanical switches are more durable and generally more pleasurable to use than conventional membrane switches, they're also noisier. Logitech has actually dampened the surfaces beneath the keys in order to reduce the noise produced by the G710+. It's still fairly noisy, but I have another keyboard with Cherry MX Brown switches in house (review forthcoming) and the difference is audible.

The G710+ features only six programmable hotkeys, but they're easy enough to reach without being confusing (as with the older G series keyboards and the Alienware M18x's). There are also three modes for an effective eighteen hotkeys as well as built-in macro recording. Finally, Logitech includes a removable wrist rest, conventional media controls (including a volume roller), and a toggle for the Windows keys. Amusingly the Windows keys also use the new Windows 8 logo.