The "dirty" secret of PC peripherals is that the word "gaming" can often mean any combination of two things: robust quality and gaudy design. Most mechanical keyboards tend to be geared towards gamers, and likewise, most high quality mice tend to be pointed in the same direction. It's not unusual for digital illustrators to use one of the single-hand gaming keyboards for Photoshop shortcuts, and a good mechanical keyboard like the Corsair Vengeance K90 pretty much sells itself the instant a regular user feels the keys.

Yet sometimes these peripherals don't feel like they were actually designed with human hands in mind. I've tested a few gaming mice that were definitely reasonably comfortable, but still clung resolutely to my aging Logitech G500. ROCCAT sent me two gaming mice to test, though, and I walked away seriously impressed. With the Kone XTD and Kone Pure, ROCCAT has two mice that are surprisingly comfortable and incredibly full-featured. Have I finally found a reason to retire my G500, and should you be looking for these?

I know I'm not the only person who's picky about the peripherals they use. Once you know what quality feels like, it can be very difficult to just go back to a run of the mill keyboard or mouse (let alone monitor.) And sometimes, when you use one, it can just click in your mind: "this feels absolutely perfect for me." That was the moment I had with the Corsair Vengeance K90, and before that, the Logitech G500. It was the same confusing moment I had when I began to settle in with the Kone XTD and its little brother, the Kone Pure. 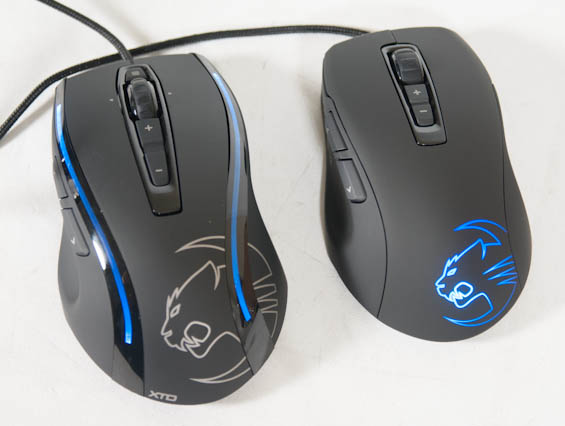 Neither of these are ambidextrous mice. I'm right-handed, but most of my good friends are southpaws, and I kind of feel for them in that they've had to adapt to a world that hates left-handed people. Still, one of them has been using a tired old basic Logitech mouse for some time now, and when I handed her the ROCCAT Kone Pure, she was pleasantly surprised.

The reason for that is because the grip of the Kone is designed to fit snugly in a broad range of hands, and importantly, ROCCAT dodges a big problem that I've found a lot of gaming mice have: poor texture. The soft touch plastic treatment that Razer and some other peripheral manufacturers tend to use doesn't breathe at all, and I've found their mice to cause my hand to sweat and perspire much worse than other mice. In comparison, the treatment on the surfaces of the Kone mice is more conservative. The glossy plastic that houses the LED stripes on the Kone XTD will undoubtedly be a sweat magnet, but the majority of the surface is quite comfortable.

Both mice are solidly built, though. They're comfortable in the hand, and the buttons are where you'd want them (with the exception of the button above the mouse wheel on the XTD, though I suspect that's very deliberately out of the way.) 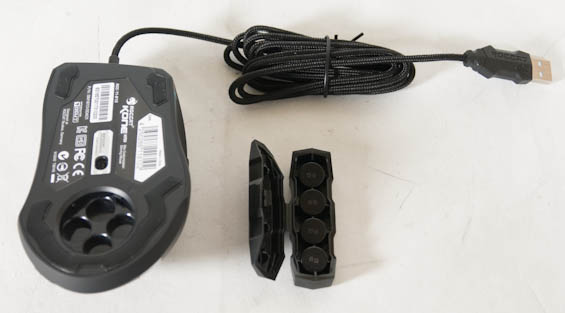 While the XTD and Pure are clearly related, the Pure is the cut down version. Both feature a rainbow of configurable LED lighting (typically tied to the active mouse profile), along with DPI adjustment buttons below the wheel and back and forward buttons on the left side, beneath the thumb. They also both feature a laser sensor rated for 8200 dpi. Where they diverge is in the additions to the XTD: a button above the mouse wheel, left and right tilt on the mouse wheel, and customizable weight. Disappointingly, the door on the XTD for the weights is a little bit loose.