NVIDIA Shield Up for Preorder May 20 for $349, Ships in June 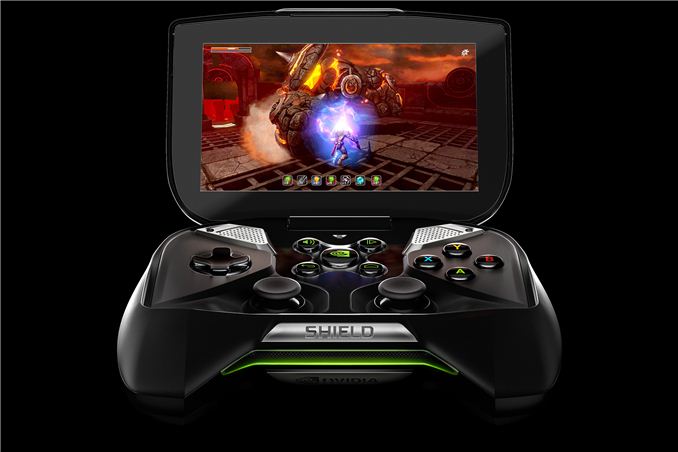 It has been a while since we last heard from NVIDIA about Project Shield. Today, NVIDIA is dropping "Project" from the name, making it formally just Shield, and simultaneously announcing pricing and availability information about its Tegra 4-packing handheld gaming console. The specs for Shield remain the same as what we saw at CES 2013 — 1.9 GHz Tegra 4 SoC, 5-inch 720p display, and Android 4.2 Jelly Bean. What's nice about getting a device straight from the SoC vendor in this case is that NVIDIA promises it will be able to push out OTA updates with the latest and greatest Android version basically in lock step with its own official Tegra 4 BSP (Board Support Package) software offerings, which makes it essentially the Tegra 4 reference platform.

As for availability, the big news is pricing, which will be $349 in the US, with preorders starting on May 20th from vendors familiar to everyone. NVIDIA called out Newegg, GameStop, Micro Center, and Canada Computers explicitly as preorder vendors, with others to follow after the preorder period. As for ship date, NVIDIA is aiming for late June for fulfillment. At $349 the Shield is more expensive than the major first party handheld gaming consoles like the Sony PS Vita or Nintendo 3DS, but an impressive middle ground and price point nonetheless for basically what boils down to a higher-end smartphone sans cellular stack but with a built in gamepad. We're excited to get hands on with Shield in its final form with the final tuning of its joysticks, triggers, and D-Pad.

In conjunction with the launch of Shield will be availability of the PC game streaming functionality as well, initially in beta form. NVIDIA has a set of recommended titles which have been optimized for the Shield controller scheme, and as we experienced at CES likely include UI tweaks to make 720p handheld gaming a reality.