The Xbox One: Hardware Analysis & Comparison to PlayStation 4

Although Microsoft did its best to minimize AMD’s role in all of this, the Xbox One features a semi-custom 28nm APU designed with AMD. If this sounds familiar it’s because the strategy is very similar to what Sony employed for the PS4’s silicon.

The phrase semi-custom comes from the fact that AMD is leveraging much of its already developed IP for the SoC. On the CPU front we have two Jaguar compute units, each one with four independent processor cores and a shared 2MB L2 cache. The combination of the two give the Xbox One its 8-core CPU. This is the same basic layout of the PS4‘s SoC.

If you’re not familiar with it, Jaguar is the follow-on to AMD’s Bobcat core - think of it as AMD’s answer to the Intel Atom. Jaguar is a 2-issue OoO architecture, but with roughly 20% higher IPC than Bobcat thanks to a number of tweaks. In ARM terms we’re talking about something that’s faster than a Cortex A15. I expect Jaguar to be close but likely fall behind Intel’s Silvermont, at least at the highest shipping frequencies. Jaguar is the foundation of AMD’s Kabini and Temash APUs, where it will ship first. I’ll have a deeper architectural look at Jaguar later this week. Update: It's live! 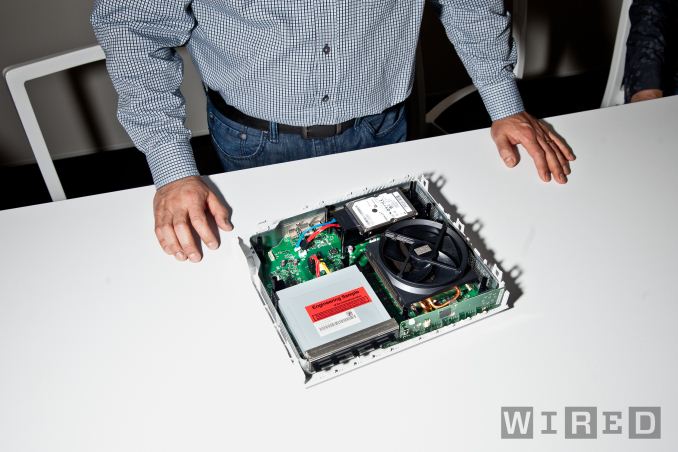 Inside the Xbox One, courtesy Wired

There’s no word on clock speed, but Jaguar at 28nm is good for up to 2GHz depending on thermal headroom. Current rumors point to both the PS4 and Xbox One running their Jaguar cores at 1.6GHz, which sounds about right. In terms of TDP, on the CPU side you’re likely looking at 30W with all cores fully loaded.

On the graphics side it’s once again obvious that Microsoft and Sony are shopping at the same store as the Xbox One’s SoC integrates an AMD GCN based GPU. Here’s where things start to get a bit controversial. Sony opted for an 18 Compute Unit GCN configuration, totaling 1152 shader processors/cores/ALUs. Microsoft went for a far smaller configuration: 768 (12 CUs).

Microsoft can’t make up the difference in clock speed alone (AMD’s GCN seems to top out around 1GHz on 28nm), and based on current leaks it looks like both MS and Sony are running their GPUs at the same 800MHz clock. The result is a 33% reduction in compute power, from 1.84 TFLOPs in the PS4 to 1.23 TFLOPs in the Xbox One. We’re still talking about over 5x the peak theoretical shader performance of the Xbox 360, likely even more given increases in efficiency thanks to AMD’s scalar GCN architecture (MS quotes up to 8x better GPU performance) - but there’s no escaping the fact that Microsoft has given the Xbox One less GPU hardware than Sony gave the PlayStation 4. Note that unlike the Xbox 360 vs. PS3 era, Sony's hardware advantage here won't need any clever developer work to extract - the architectures are near identical, Sony just has more resources available to use.

Remember all of my talk earlier about a slight pivot in strategy? Microsoft seems to believe that throwing as much power as possible at the next Xbox wasn’t the key to success and its silicon choices reflect that.