One of the burgeoning questions relating to overclocking over the past couple of years has been the quality of Intel’s construction under the heatspreader relating to thermal interface material and adhesives. This caused enough of a talking point for Intel to release Devil’s Canyon (read our review here) which featured an upgraded interface and essentially reduced the thermal pressure restricting the overclock.

Thankfully Intel has not decided to play around with the extreme edition platform too much since Nehalem. Although recent reports suggest that Intel is using an epoxy to bind the die to the heatspreader, one tell-tale sign that a goopy TIM is not being used is the hole in the heatspreader in one of the corners. 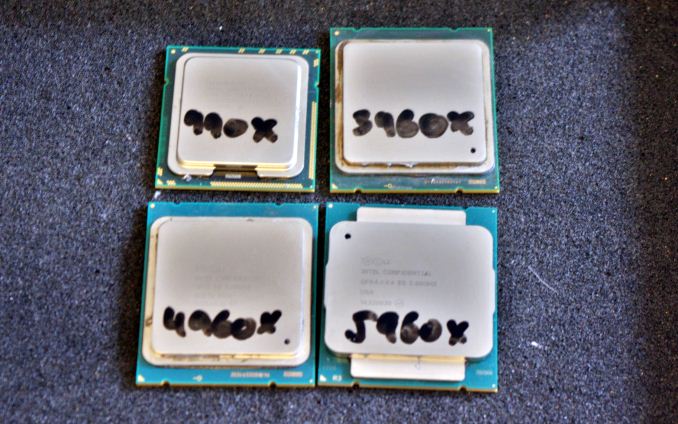 Looking through the previous generations, Sandy-E, Ivy-E and Haswell-E shows this hole, which is typically thought to allow for expansion of the heatspreader and/or gas trapped inside due to the heat. Also due to the way that the epoxy is handled, the heatspreader cannot be removed without force and destroying parts the silicon die. 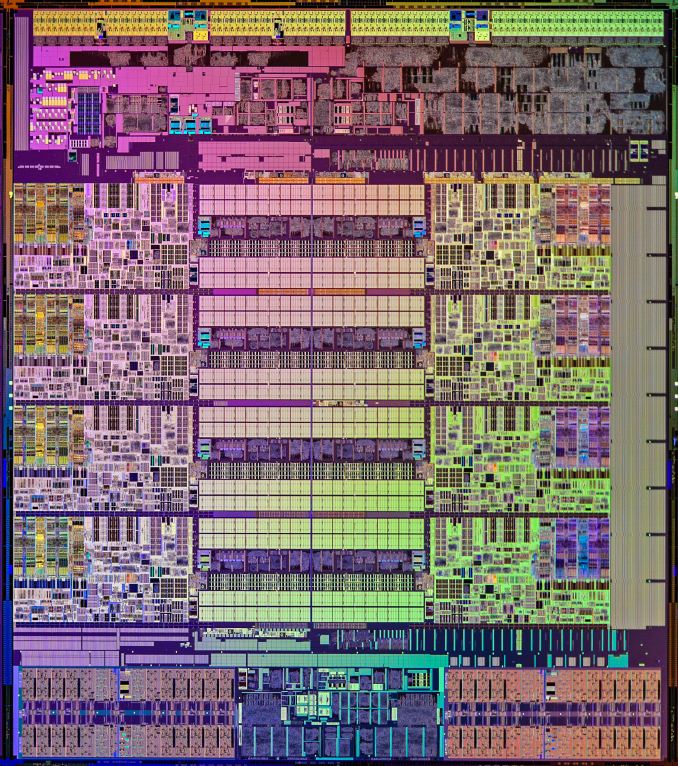 Due to the way that the CPU is arranged, with the cores to the left and right of center, there may develop a series of recommendations when using different methods of applying thermal paste as the sources of the heat will most likely be in these two regions. I would advise the normal procedure of applying thermal paste here: a small blob in the middle and allow the heatsink to spread the TIM through applied pressure. This helps remove air bubbles as the TIM spreads; spreading it out manually leads to air bubbles all over the place and is not recommended for high thermal sources.

In our results below we are using a Cooler Master Nepton 140XL closed loop liquid CPU cooler, and following the instructions above our CPU temperatures stay extremely low until we pile on the overclock. In fact I was seeing less than 30ºC while idle, which should bode well for overclocking. 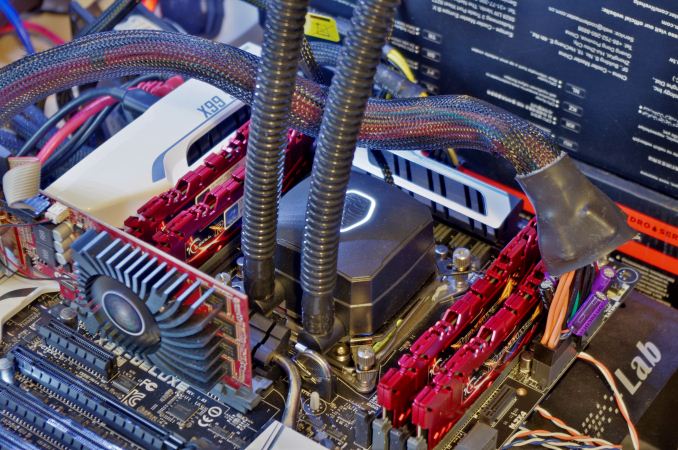 Our standard overclocking methodology is as follows. We select the overclock options and test for stability with PovRay and OCCT to simulate high-end workloads. These stability tests aim to catch any immediate causes for memory or CPU errors.

For manual overclocks, based on the information gathered from stock testing, we start at a nominal voltage and CPU multiplier, and the multiplier is increased until the stability tests are failed. The CPU voltage is increased gradually until the stability tests are passed, and the process repeated until the motherboard reduces the multiplier automatically (due to safety protocol) or the CPU temperature reaches a stupidly high level (100ºC+). Our test bed is not in a case, which should push overclocks higher with fresher (cooler) air.

Due to the timing of our testing, we were only able to test two i7-5960X CPUs. Both of these were M0 stepping samples, the same as the retail stepping as far as we understand. The i7-5960X for reference is a 3.0 GHz base clock CPU with 8 cores, with a stock load voltage around 1.050 volts. Standard turbo modes allow 3.5 GHz, and so we start our testing at 3.5 GHz on all cores at 1.000 volts set in the BIOS. Where load line calibration was possible, it was enabled to match our setting as closely as possible, but otherwise only the CPU voltage was adjusted. 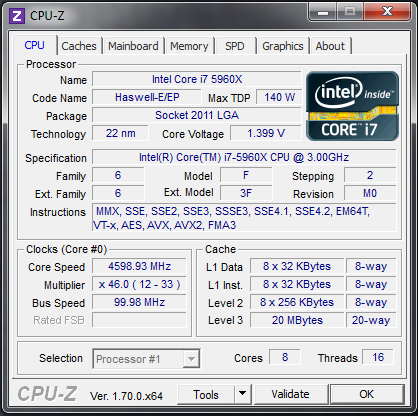 The first sample has a lot of early headroom with +0.100 volts allowing for an extra +1.1 GHz, or a 36.7% overclock. It has been a long while since numbers like +36.7% has been bandied around Intel’s extreme range, with only the i7-920 type Nehalem CPUs doing that sort of overclock in its stride.

The sweet spot for this CPU seems to be at around 4.4 GHz where the CPU voltage is just starting to rise but peak temperatures are under 75ºC. 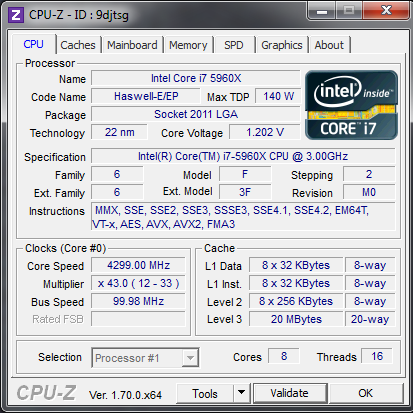 Unfortunately our second sample was pretty much a dud by comparison. The voltage needed early on in the overclock went up quickly. This time we were unable to monitor temperatures due to a BIOS issue, but had a power meter on hand. We still managed a +1.1 GHz overclock easily enough, although +0.175 volts was required.

At 4.1 GHz, peak power is +104W over the system power draw at stock, with another 40W at 4.3 GHz. This shows that Haswell-E can be a power hog from even small overclocks, and thus users must have cooling to match. If we add the 140W TDP and the +140W more from the overclock (it would most likely be more than this due to the change of efficiency in the PSU curve), then a mildly overclocked CPU is fast approaching 300W. One can imagine that a highly clocked 4.7 GHz sample would be nearer 400W, and thus users should purchase power supplies to match.

A Problem with Haswell

One issue from Haswell does crop up with Haswell-E: the variability in the quality of the processors. Intel only guarantees that the processor will run at the specific frequency and voltage that is applied out of the factory: any other speed is out of specification and not supported. With Haswell LGA1150 CPUs, while the turbo frequency of the i7-4770K was 3.9 GHz, some CPUs barely managed 4.2 GHz for a 24/7 system.

If we consider that the i7-4770K only needs one of those CPU cores to be below quality to ruin overclockability, then placing double the cores on the i7-5960X is asking for double the trouble. Time to put some numbers to this:

In ASUS’ press deck for overclocking recommendations that came with the X99-Deluxe, they tell us the following:

By that standard our first CPU is around average and the second CPU we tested is below average. Even with these guidelines, it would seem that other reviewers and even manufacturers are getting a wide array of results. I have heard of reports of CPUs getting 4.7 GHz on a water loop, whereas others are testing a range of CPUs and not getting more than 4.4 GHz, like our second sample.

ASUS is recommending that anything over 1.25 volts requires a water/liquid cooling as a bare minimum, with up to 1.35V needing a triple (3x120mm) radiator setup depending on ambient temperatures. As with most overclocked setups, this means that the enthusiast user must decide between clock speed or fan noise for their machine.

Another issue with Haswell-E is the current draw of the CPU. ASUS is stating that the standard current draw for the CPU can reach 25 amps, meaning that the power supply must be capable of supplying at least 30 amps on the EPS12V cable. This is covered for most home-build non-OEM power supplies with an 80 PLUS rating, but suggests that a cheap power supply might trigger the over-current protection early.

As part of our testing, we hooked up our older i7-4960X and i7-3960X to the ASUS Rampage IV Black Edition, as well as compared to our previous i7-4790K Haswell overclocks:

Our i7-3960X sample at the time was actually a really nice overclocking CPU, in comparison to our i7-4960X which was below overage. I put two values here for the i7-5960X, showing that a 4.3 GHz overclock, while it is lower in number than the 4.8 GHz of the i7-3960X, is actually around the same percentage overclock. If we have a good i7-5960X for comparison, then +50% overclock comes very easily.

The next question then is which one is better for performance?  While the Haswell-E CPUs have a lower frequency than the previous generations, they do have the benefit of a higher IPC and DDR4 memory. There is also the core count, with the i7-5960X having 8 cores at 4.3/4.6 GHz against the six cores or four cores. 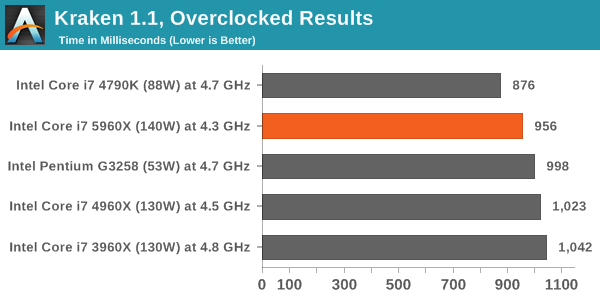 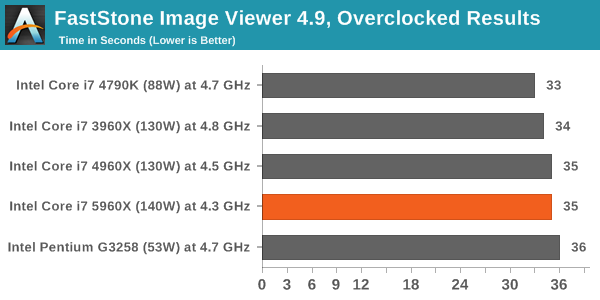 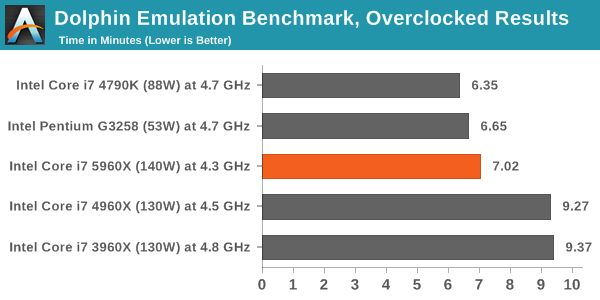 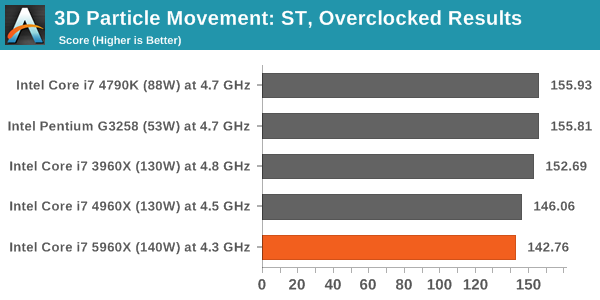 In most benchmarks, the 5960X, 4960X and 3960X are actually evenly matched for single threaded performance, with the 5960X taking the edge on software that can take advantage of the newer instruction sets.

For multithreaded tasks, an overclocked i7-5960X is the only way to go: 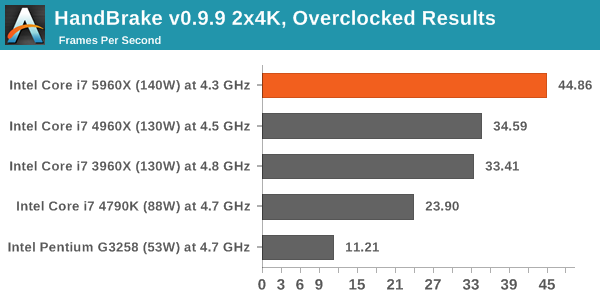 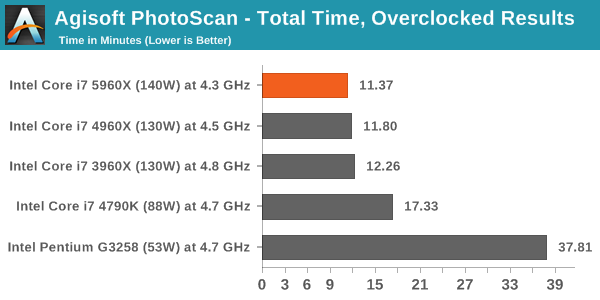 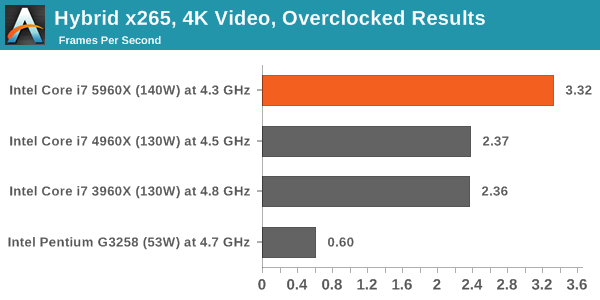 The graphs later in the review comparing each of these processors at stock will have our overclocked results as well.