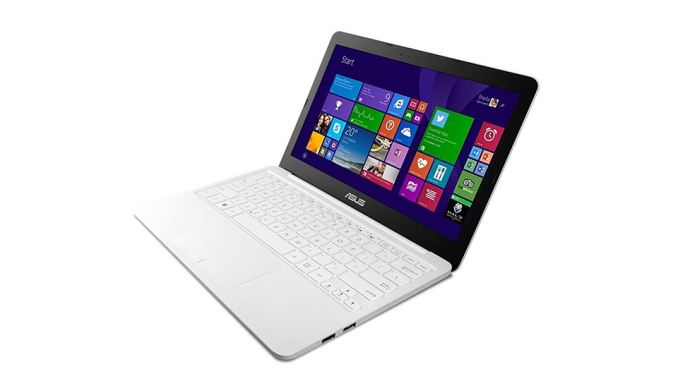 When ASUS introduced the first EeePC back in 2007, it became a huge hit and essentially ushered in the era of the netbook. Using Linux as the core OS and sporting low-end hardware in order to target a price of $200 (though it ended up shipping at $300 initially), the ultraportables world was forever changed. Google essentially revised and reinvigorated the netbook market with their Chromebook initiative, which brought us $200 laptops in 2011 that again used an alternative OS. Considering the $200 Chromebooks have been one of the highest volume laptops for the past year or two, others are looking to get a piece of that market. Now ASUS is teaming up with Microsoft to release a Windows 8.1 with Bing laptop that hopes to steal some of the thunder from budget Chromebooks.

As you'd expect from any full laptop selling for $200, the components are going to be relatively low-end. ASUS is using an 11.6" 1366x768 LCD – and no, it is not a touchscreen – the first sign of compromise. The processor comes courtesy of Intel's quad-core Atom platform (Bay Trail), and the X205 will ship with 2GB RAM and 32GB onboard storage (plus two years free of 500GB ASUS WebStorage). It also features two USB 2.0 ports, 802.11n WiFi, micro-HDMI, and microSD support. There will also be a version with 64GB of storage at a slightly higher price point. In other words, this is sort of like what would happen if you took a basic tablet and converted it back into a laptop, and then used Windows 8.1 instead of Android.

The overall quality of any $200 laptop is obviously going to be a concern, as that price point is far below what we usually see for Windows laptops. For those that want a higher performance computing device, this is obviously not going to fit their needs, but Windows 8.1 has taken steps to improving performance on low memory devices, and you still get a full keyboard and presumably decent battery life. You also get full compatibility with the existing library of Windows applications, which is going to be the real selling point. Is the market still interested in such a device, or have most people moved on to tablets and Chromebooks? We'll find out how well the X205 does at retail in the coming months.