Many Americans might not immediately recognize AG Neovo, but most likely our European and Asia Pacific readers do.  AG Neovo has been around since 1992 as a high end manufacturer based in Taiwan.  Of course today, there is also a European and a North American branch as well.

An important feature in a monitor is the overall presentation.  Surprisingly, every so often, a monitor will have distracting diodes or unusually reflective writing on the front of the monitor.  We were pleased to see the S-18 did not break this very basic of requirements. In fact, the S-18 demonstrates a very simple and stylish appearance.  (The ‘S’ in S-18 denotes Neovo’s “stylish” model.) 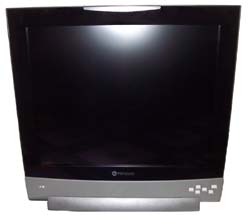 Perhaps the most visually stunning aspect of the S-18 is the sleek black bezel.  When the monitor is off, one almost gets a feeling of staring into the monolith from 2001: A Space Odyssey.  Closer inspection revels that this sleekness comes from a fairly thick piece of glass Neovo calls a “NeoV Crystal Optic Filter.”  The unique Filter creates an elegant first impression.  Most of our other monitors at the AnandTech lab appear slightly ‘flimsy’ when next to the S-18.  We will explain more about the NeoV Filter in detail after analyzing the exterior construction of the monitor.

Even though the simplistic design is fairly impressive, there is more to a monitor than sleek design.  We stressed in the last review that pixel quality holds an enormous amount of importance.  As we expect from a review model, there were zero defects in the LCD.  Occasionally, when buying an LCD monitor, several stuck pixels may be present.  Some manufacturers allow up to a certain number of defective pixels per monitor in order to pass its quality test.  However, since AG Neovo only produces LCD monitors exclusively, they have strict quality checks and tests.  We would expect every monitor from AG Neovo to be of only the highest quality.  From our experience, any retail store will take back a monitor with broken pixels and exchange it for a new monitor.  Unfortunately, when buying an LCD online, you will have to pay for shipping to return the monitor to the online dealer.

At 17.6lbs, the monitor is a little heavy.  The extra weight is obviously due to the extra glass panel over the front of the bezel (the NeoV Filter).  On the other hand, the S-18 provides a fairly shallow base, at 8.2”.  This base has the ability to fold up vertical for a wall mounting.  When the base is folded up, the total depth is under 4 inches.  Unfortunately, the wall mounting kit is not included with the monitor.