The Corsair Lapdog Review: Gaming with a Mouse and Keyboard in the Living Room

As we mentioned in our introduction, the design of the Lapdog underwent several changes between its announcement and the release of the final product. One of these changes is that the foam pad is not permanently attached to the rest of the body. It is a separate part that attaches magnetically and can be easily installed or removed within a second. The foam pad is also much thinner than what Corsair had shown in their concept pictures, reducing the overall size of the Lapdog. It also has the small tool necessary for the dismantling of the Lapdog inserted into a holder at its center. 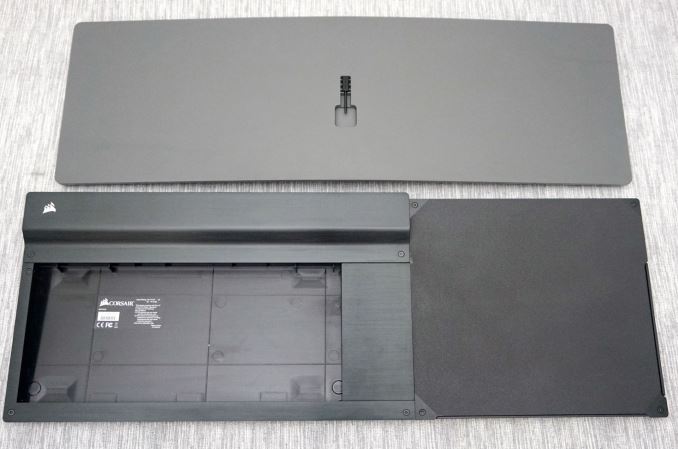 Another major change from the concept design is that the Lapdog now does not support only the K65, but the K70 keyboard as well. Although that still limits the Lapdog’s compatibility to just two of Corsair’s keyboard series, the K70 series is very popular, offers more options and is much more readily available than the tenkeyless K65.

As the Lapdog has been designed for Corsair’s keyboards, the designer obviously matched its design and materials to those of the supported devices. Therefore, the top of the Lapdog is made of anodized black aluminum that perfectly matches the bodies of the K65/K70 series keyboards. Another change from the concept design can be seen here, as the top cover ceases at the end of the keyboard area. This increases the size of the mouse pad’s surface and does not visually interfere with the design of the mouse, as the user may be limited to just two keyboard series but is free to use any mouse with the Lapdog.

The bottom of the Lapdog is plain and flat, allowing it to sit on a desktop and be used as a typical keyboard/mouse if need be. Six metallic points can be seen that allow the connection with the foam pad bottom, but they are recessed and will not damage the surface that the Lapdog sits on. There are no rubber or anti-slip pads but we found that they are not really necessary, as the sheer size of the Lapdog is enough to ensure its firm stay on a desk or table top.

Corsair tried to visually enhance the Lapdog by making the plastic sides and rear glossy, slightly resembling glass. The design is visually pleasing but also prone to fingermarks. 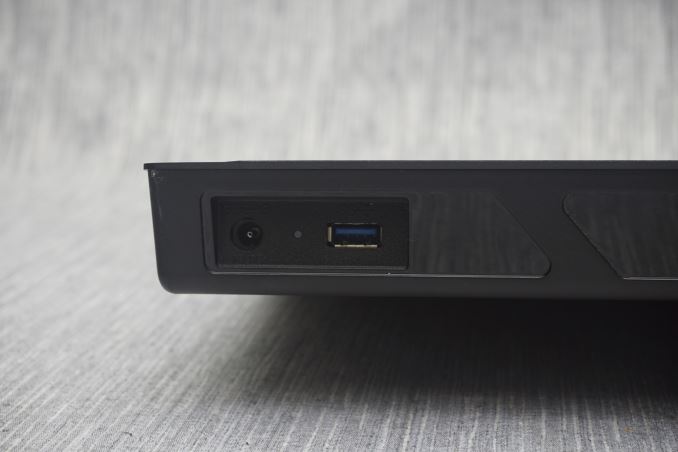 Two USB 3.0 ports can be found on the right side of the Lapdog, for the connection of other devices, such as USB headsets and flash drives. They can also be used for the fast charging of other devices, as they provide up to 1.5 A each. 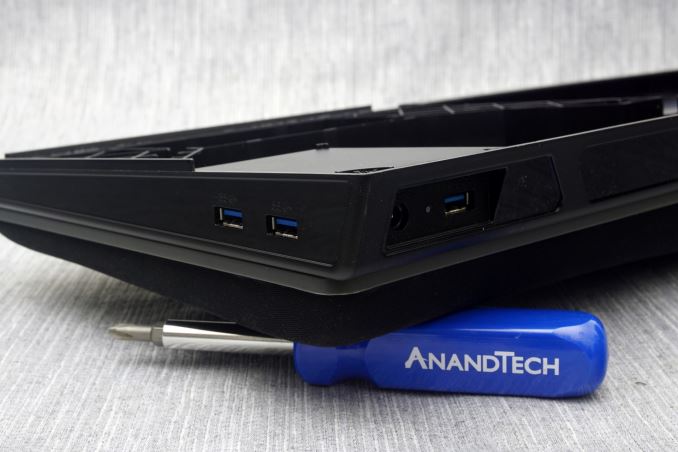 To remove the two top covers of the Lapdog, the user needs to remove six hexagonal screws using the tool found on the foam pad bottom. For the installation of a K70 keyboard, the flat cover at the center of the Lapdog also has to be removed. Even though the aluminum strip across the left and bottom of the keyboard seems to be held with three screws, it is actually glued to the plastic body and cannot be removed. These three screws seem to be mostly cosmetic or installed just to improve the mechanical cohesion between the strip and the plastic bottom. 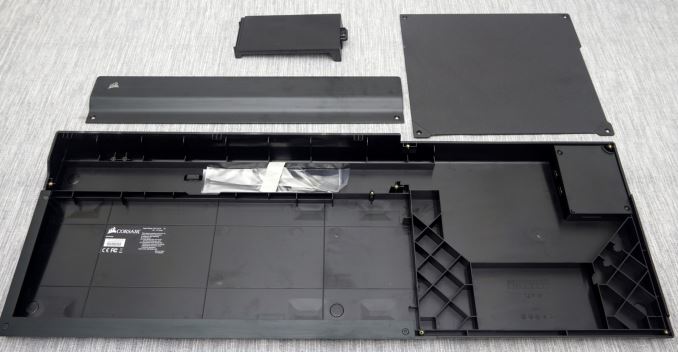 After the covers have been removed, we are greeted with a spacious interior that allows for easy and convenient cable management. We also found two simple plastic cable ties to aid the user with the cable management, but we found that the use of the non-permanent metallic wire ties is more convenient to that end. Such metallic wire ties can be found on K65/K70 keyboard cables when unpacking them. The installation of a keyboard is a seamless process, as the keyboard needs only to be placed inside the Lapdog and the covers will lock it in place.

Cable management is very easy inside the spacious interior of the Lapdog. The thick cables of a K70 can easily fit even if left completely unattended and grouped to the right side of the keyboard. Only one of the keyboard’s connectors can be used, as a USB 3.0 port (or the AC adapter) will provide enough current for it. 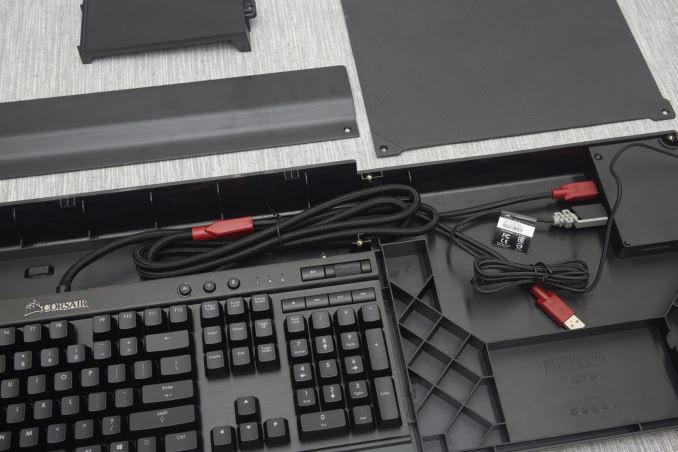 The cable of the mouse needs to exit from an opening to the right side of the keyboard that is formed between the mouse pad and the top cover. There are multiple ways to manage how to control/limit the length of the cable, such as using a cable tie to secure it on the keyboard’s cable or at cable tie point, or round it up to a skein and let only the wanted length exit the opening. Another effective way is to have the cable go around the right screw point of the top cover, which will hold the cable without damaging it.

An unused open area and cable guiding openings can be seen at the lowermost half of the mousepad area. Also, an internal sixteen pin connector can be seen on the USB hub, hinting that Corsair has another feature in mind for future versions of the Lapdog. 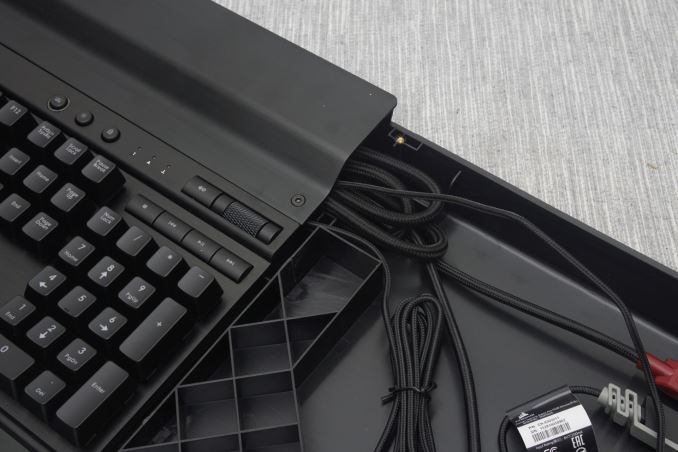 For the means of this review, Corsair has provided us with a K70 Mechanical Keyboard and a Sabre Optical Gaming Mouse. Once assembled, it forms a very neat, visually pleasing setup, with the keyboard appearing amalgamated with the Lapdog’s body. The 11” × 11” (28 cm × 28 cm) mouse pad area is more than adequate and its treated surface is great for modern gaming mice. Our only concern lies with the large opening to the right side of the top cover, where the mouse cable comes out from. There is nothing covering this opening and we feel that a rubber grommet or some kind of concealment is necessary, as the opening is too large.