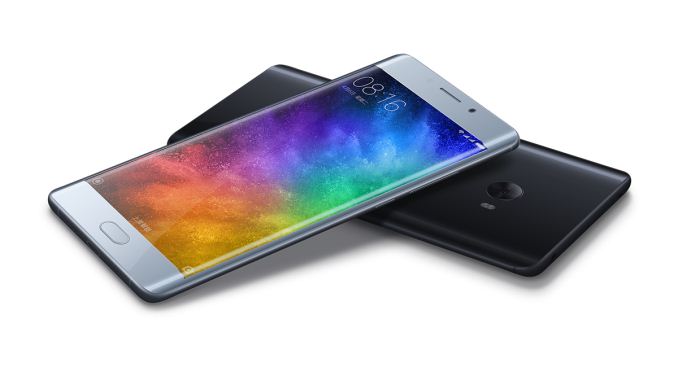 Xiaomi has added two new phones to its lineup: the Mi Note 2 and the Mi MIX. Both are flagship phones with large screens that emphasize performance and design; however, despite some overlap in criteria and internal hardware, these are two very distinct devices.

Like its predecessor, the Mi Note, the Mi Note 2 has an aluminum frame and a glass back with curved edges, but instead of the previous design’s flat front, the Mi Note 2 uses a flexible OLED display to allow curved edges to the front too, design features Samsung’s recent Galaxy phones also employ. Another obvious change from the previous model is the addition of a capacitive fingerprint sensor. The pill-shaped sensor, which sits below the screen and is flanked by capacitive navigation buttons, keeps the lower bezel relatively slim, giving the Mi Note 2 a screen-to-body ratio of 77.2%. The rear-facing camera sits flush with the shiny and smooth glass on the back and includes a slightly raised and polished ring to protect the lens. 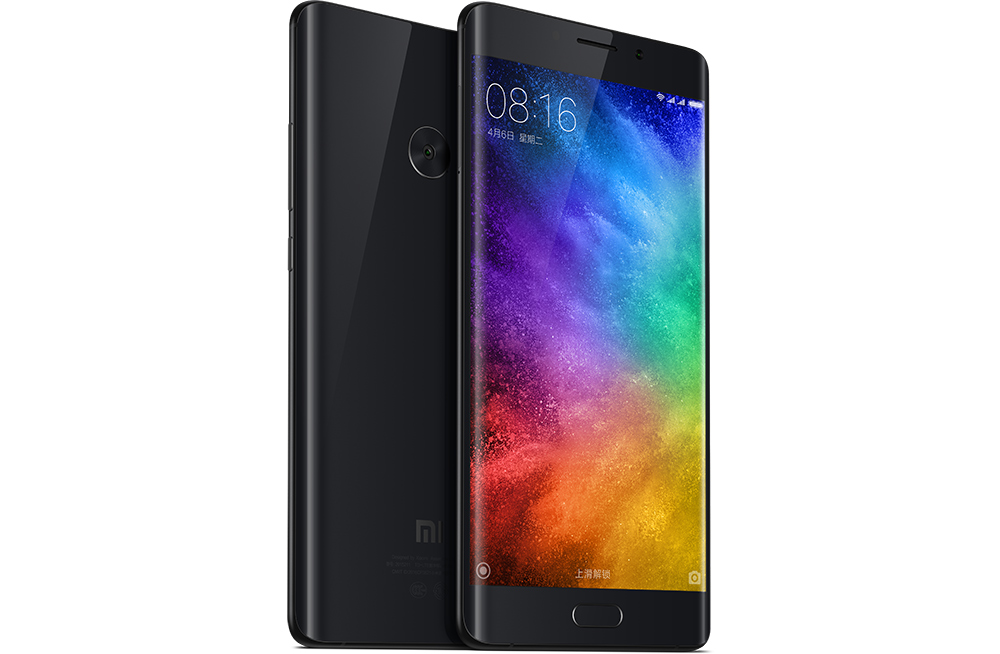 The design is generally symmetric and balanced: The centered earpiece has the sensors and front-facing camera to either side, and the centered USB Type-C port on the bottom has matching arrays of holes for the downward-firing speaker and microphone. The offset 3.5mm headphone jack on the top edge and the dual-color LED flash on the back are the only features to break symmetry.

The Mi Note 2’s 5.7-inch OLED display delivers excellent black levels and covers 110% of the NTSC color gamut, according to Xiaomi, which basically means it should deliver highly saturated colors. For people who prefer more accurate colors, the phone provides an sRGB mode and a control for adjusting the display’s color temperature. Unfortunately, its 1920x1080 resolution is less than ideal for such a large display.

Inside the Mi Note 2 is Qualcomm’s latest Snapdragon 821 SoC, which includes four of its custom Kryo CPU cores and an Adreno 530 GPU, and a sufficiently large 4070mAh non-accessible battery that supports Qualcomm’s Quick Charge 3.0 fast charging technology. It also comes with either 4GB of RAM and 64GB of internal UFS 2.0 storage or 6GB of RAM and 128GB of storage, but there’s no support for microSD cards. 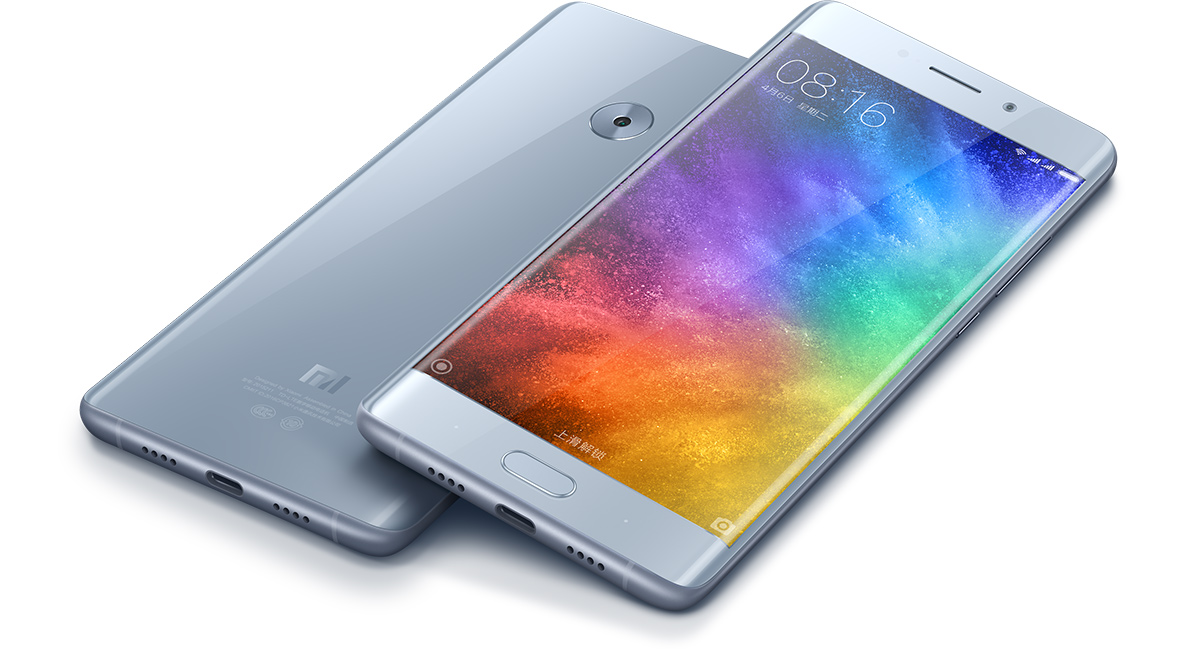 The 8MP front-facing camera includes autofocus and Xiaomi’s third-generation beauty mode processing. Around back is a 22.5MP Sony IMX318 Exmor RS sensor, which is among a new generation of sensors that use smaller 1.0µm pixels. Despite the reduction in full-well capacity, Sony claims its new sensor matches the image quality of its previous IMX230 Exmor RS sensor that uses larger 1.12µm pixels. Stacked above the sensor is a lens array with six elements and an f/2.0 aperture.

The Mi Note 2 comes in two different colors—Piano Black and Glacier Silver—and three different versions—two which will only be available in China and a global version that supports 6 modes and 37 frequency bands. The Mi Note 2 will be available in China starting November 1st for ¥2799 (4GB RAM / 64GB NAND) or ¥3299 (6GB RAM / 128GB NAND). The global version will cost ¥3499 (6GB RAM / 128GB NAND).

The larger Mi MIX was jointly developed with prolific designer Philippe Starck and features an all-ceramic body with ceramic buttons. The front is dominated by a 6.4-inch display with virtually no bezels along the top or sides, giving the phone a 91.3% screen-to-body ratio. The 5MP front-facing camera is located in the lower-right corner of the slim lower bezel, while the ultrasonic (instead of infrared) proximity sensor is located behind the screen. There are no physical or capacitive buttons in the lower bezel either, because it uses onscreen navigation controls.

Eliminating the upper bezel meant eliminating the traditional earpiece speaker too. In its place, the Mi MIX uses a piezoelectric-driven cantilevered beam that produces sound by vibrating the phone’s ceramic frame instead of a speaker driver. What’s not clear, though, is if people nearby will also be able to hear the conversation, or if the sound is directed only towards the user.

A circular camera sits flush with the ceramic back, stacked above a circular fingerprint sensor. A USB Type-C port sits centered on the bottom edge flanked by a symmetric array of small holes hiding a downward firing speaker and microphone. A 3.5mm headphone jack is on the top edge. 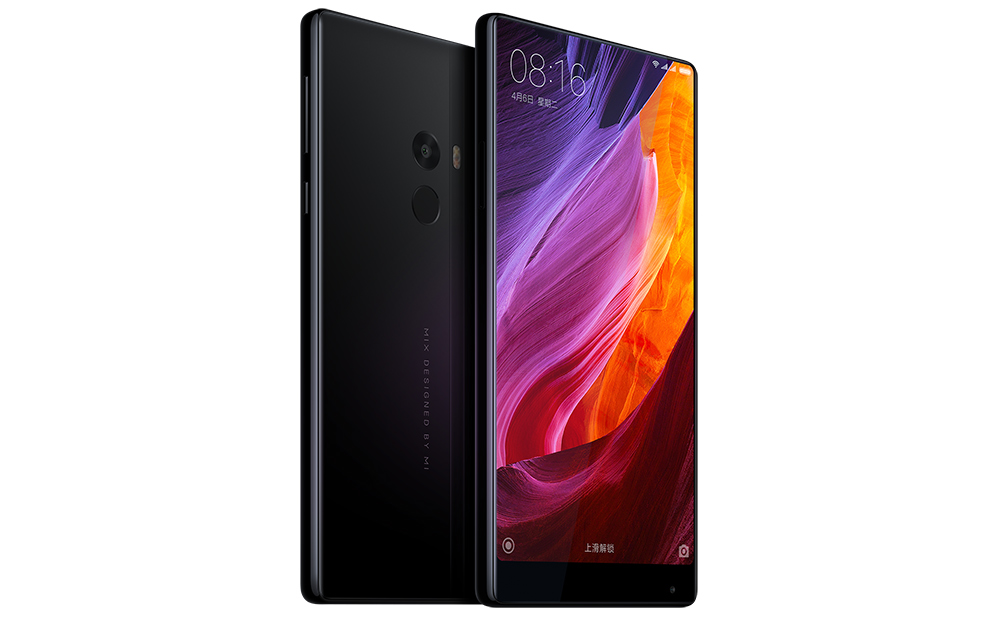 Its 6.4-inch IPS LCD display has an odd 17:9 aspect ratio that’s supposed to make room for the onscreen navigation controls while still providing a traditional 16:9 viewable area. Its 2040x1080 resolution seems low for such a large display, but it still provides a decent 362 PPI pixel density. Xiaomi claims a peak brightness of 500 nits and 94% coverage of the NTSC color gamut, making this a wide-gamut panel with more saturated colors. Like the Mi Note 2, the Mi MIX also provides a control for adjusting the display’s color temperature and a native sRGB mode.

Its internal hardware is also similar to the Mi Note 2’s, packing in an impressive list of hardware. The key differences are a larger 4400mAh battery and twice the internal UFS 2.0 NAND. 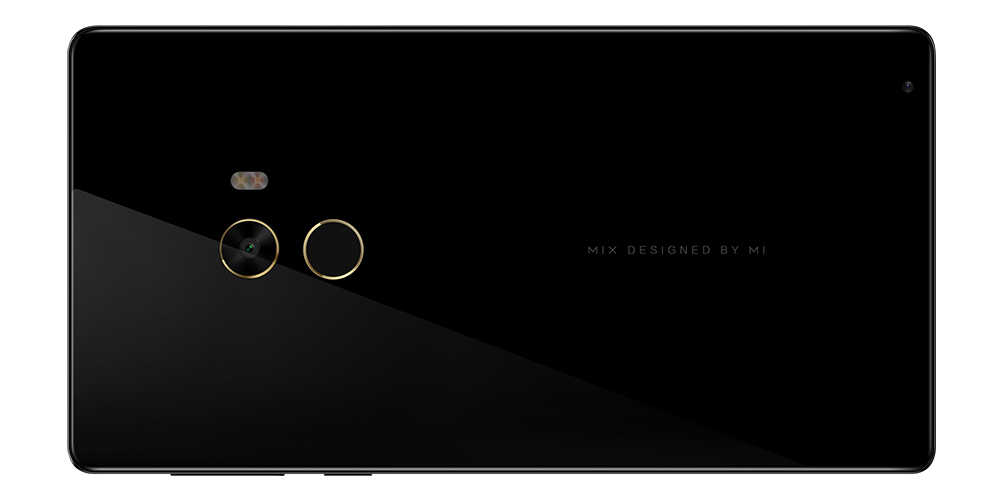 The Mi MIX will be available exclusively in China beginning November 4th and will come in two different versions. The standard version will cost ¥3499 with 4GB of RAM and 128GB of internal storage, while a special limited edition version, which comes with 6GB of RAM, 256GB of internal storage, and 18K gold-plated accents around the rear camera and fingerprint sensor will cost ¥3999.