Proving once again that the only way to keep a secret is to not share it, Lenovo seems to have accidentally published the specifications of AMD’s yet-to-be announced Ryzen 3 2300X and Ryzen 5 2500X processors. The new chips are aimed at mid-range systems, but feature an unlocked multiplier as well as XFR on-the-fly frequency adjustment, which makes them particularly appealing to enthusiasts looking for additional bits of performance.

Lenovo will offer AMD’s Ryzen 3 2300X and Ryzen 5 2500X processors with its ThinkCentre M725 SFF desktops along with a variety of other CPUs from the manufacturer, based on the spec sheet (published below). Eventually, AMD will make the chips available to its retail customers, replacing existing Ryzen 3 1300X and Ryzen 5 1500X products, but exact launch dates are unknown.

The first details about the Ryzen 3 2300X and Ryzen 5 2500X processors were published back in May, so now we just need to fill in the gaps. Both CPUs feature four cores (with or without SMT) clocked at 3.5 – 3.6 GHz default that can automatically boost their frequency to 4 GHz, an increase when compared to the first-generation Ryzen chips. Besides, the new CPUs support DDR-2933 memory, another upgrade of Zen+ designs vs. original Zen. As for thermal dissipation, the chips are speced for a 65 W TDP, which makes them compatible with a wide range of systems.

Lenovo has been offering its ThinkCentre M725 SFF desktops since July, so the new processors from AMD are already in production and are available to select customers. It is highly likely that the CPUs will hit retail in the coming weeks. As for MSRPs, they will probably be comparable with those of existing Ryzen 3 1300X and Ryzen 5 1500X chips. 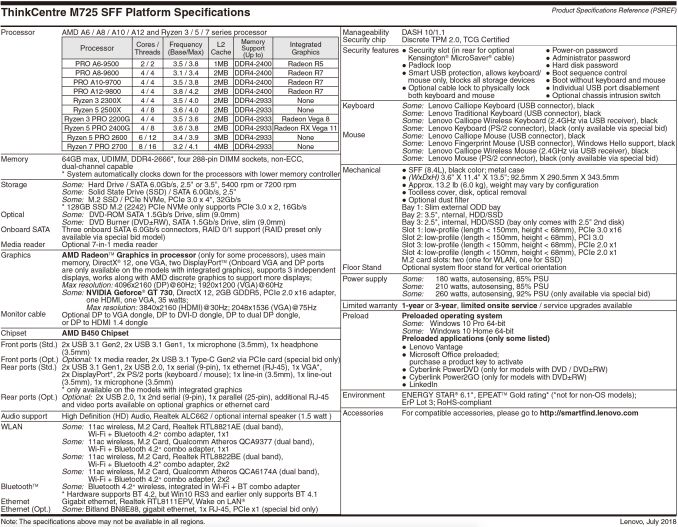