The ASUS Republic of Gamers firmware has two different modes for users to select between in the BIOS: EZ and Advanced. The basic 'EZ' mode is for novice users looking to make basic alterations. This includes basic XMP support (which ASUS calls DOCP on its AMD based models). On the basic screen is a list of core information including fan profile speeds, DRAM status, model and firmware version, current CPU Core voltage and motherboard temperature. The design of the firmware includes a dark grey background with white text and red highlights across the top and bottom of the GUI. 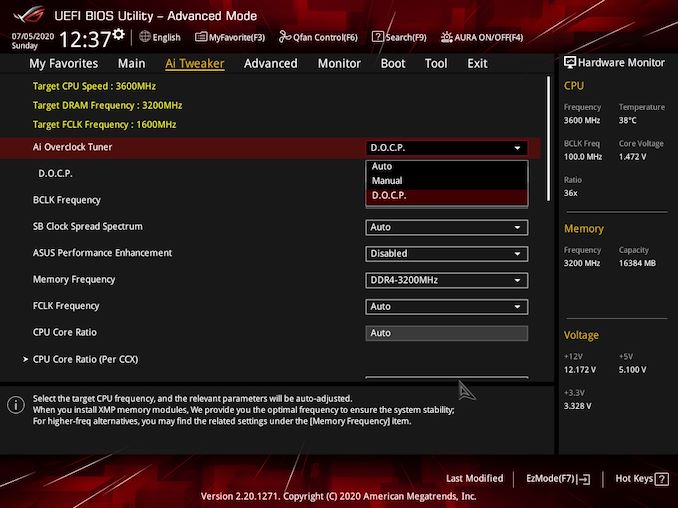 Pressing the F7 key allows users to switch between the EZ and the advanced mode, with the advanced more opening up the more familiar features and functions of its ROG based models. There's plenty of overclocking customizations on offer which is typical of an ASUS ROG board, with all of the available overclocking options within the Ai Tweaker section. Here users can customize the CPU settings including CPU frequency in 100 MHz increments, CPU VCore voltages, as well as a host of memory settings including memory voltage, and a section dedicated to memory latencies. One of the main features of AMD's Ryzen 3000 series is Precision Boost Overdrive, and ASUS has included it sown section within the AI Tweaker for users to customize, which allows users to create more aggressive boost profiles.

ASUS has one of the most consistent firmware within the industry, and the Republic of Gamers BIOS on the Strix B550-F Gaming Wi-Fi is a good example of this. The firmware itself is solid and reliable, is responsive to USB keyboard and mice, and is very well laid out and easy to navigate.

One of the unique ASUS implementations to its Republic of Gamers branded motherboards is the Armory Crate, which is pooled into memory on the motherboard and contains basic networking drivers and all the software and utilities. Armory Crate pops up when Windows is first installed, so it looks like somehow ASUS has got into your install image! Thankfully this is just some extra software that helps most users get hold of chipset and controller drivrs as need. If can be disabled in the BIOS if needed. Note this means that the Driver CD traditionally bundled with a motherboard isn't really needed, as long as you have an internet connection.

Some of the most notable utilities in the ASUS package include the ASUS AI Suite 3 software, the ROG Gamefirst VI software, a custom skinned version of the CPU-Z monitoring utility, and its RAMCache III software. 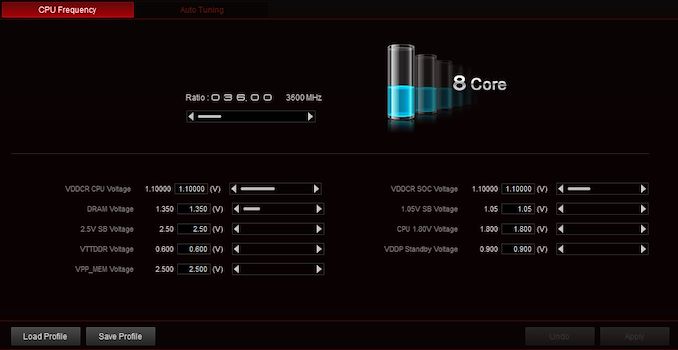 The ASUS AI Suite 3 utility is an amalgamation of various version of its software with functions for overclocking the processor, creating custom fan curve profiles, and changing power delivery power settings. Users can overclock the processor including core voltages including SoC voltage and memory voltages, but users cannot adjust the memory frequency outside of the BIOS. The ASUS AI Suite 3 also allows users to change the fan curve profiles, or even create new ones with more aggressive settings for cooler temperatures, or more subtle settings for less noise.

Also included in the software bundle is a custom ROG skinned version of the CPU-Z monitoring application. There is also ROG GameFirst VI which offers network traffic shaping options, while the Ramcache III software gives users the ability to create pools of high-speed storage using unused DRAM. There's more than enough for users to get to grips within the firmware and software bundle, and as usual, the ASUS package is highly competitive.