One of the primary issues with most of the PCIe 4.0 NVMe storage drives on the market today is power consumption. The only base solution for OEMs in the market, for 6+ months, can consume up to 5-8 W when in use. This is due to the SSD controller that was originally built for PCIe 3.0 work and not optimized when it was updated for PCIe 4.0. However, as that design was first to market and works in desktops it does what it needed to do. But for laptops, we’ve been waiting on the optimized follow ups. The new ADATA Gammix S50 Lite will use one of those optimized designs.

A Second Wave of PCIe 4.0 SSDs

The first PCIe 4.0 drives on the market used the Phison E16 controller which was, for lack of a better word, a hybrid design: it took the PCIe 3.0 E12 controller, removed the PCIe 3.0 part, and added in PCIe 4.0 connectivity. A controller involves both the connection standard and a compute segment, and the compute segment was not updated in order to enable the product to come to market very quickly. As a result, even though the compute could handle PCIe 4.0, it wasn’t optimized for it, but we had some power hungry drives to play with for a while.

Since then, we have been waiting for the second wave of PCIe 4.0 controllers to come to market. Samsung is making way with its new Elpis controller in the Samsung 980 Pro, and Phison’s own next-gen E18 is expected to come to market later this year, while the E19 has been teased at a couple of industry events. These controllers are all set to offer better performance or better efficiency for the wider adoption of PCIe 4.0 SSDs.

Then there are also SMI controllers, and both SMI and its OEM partners have teased new PCIe 4.0 SSD turnkey designs as early as Computex 2019. At CES this year ADATA teased two PCIe 4.0 drives built with new SMI controllers: a high performance model with the SM2264 for desktops, and a medium performance efficiency model with the SM2267 for notebooks. The SM2267 is what is going into the new Gammix S50 Lite SSD being launched today. 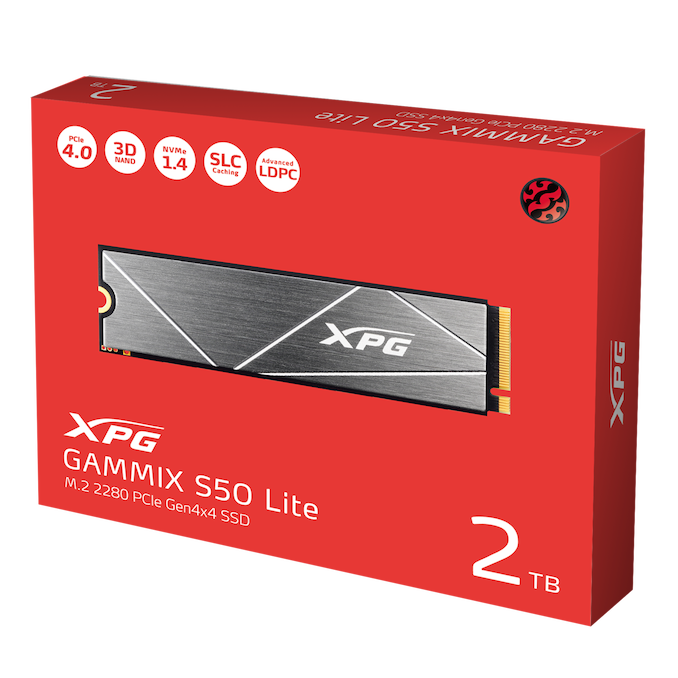 The new drive might not sound like much in the performance stakes, with only 3900 MB/sec read and 3200 MB/sec writes, as well as 490K/540K IOPs, but as a PCIe 4.0 drive it is much faster than a PCIe 3.0 drive and ADATA claims that due to the design it can be up to 20% cooler (in temperature) than other competitive offerings.

This drive uses a four-channel design rather than 8, which goes someway into explaining the performance and the potentially lower power consumption, but it also has a DRAM cache buffer and SLC caching to help with keeping performance high. What all of this comes down to is making the drive more suitable for installation in upcoming PCIe 4.0-enabled laptops featuring Tiger Lake processors.

The Gammix S50 Lite will come in 1 TB and 2 TB capacities initially, offer LPDC error correction, RAID engine support, and AES 256-bit encryption. The drive has a 5 year warranty, and both models are rated to 1480 terabytes written (TBW). The drives will be available in North America from October 1st, with the following pricing: