The Xbox Series X Review: Ushering In The Next Generation of Game Consoles

Anyone watching the PC space should be aware of how far AMD has come in the last couple of years. First with the launch of their Zen CPU architecture, and again with Zen 2 and Zen 3, AMD has shot back up to being a formidable opponent for Intel. On the graphics side, AMD has trailed market leader NVIDIA for some time, although they are trying to make amends with their new RDNA 2 graphics architecture. Throughout all of this, AMD has been a staple in the console space, providing the system on a chip (SoC) powering both PlayStation and Xbox in the last generation, and AMD’s design wins have continued for this new generation. 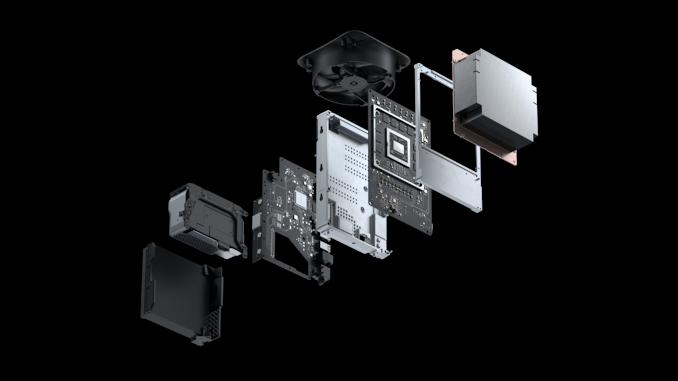 The big difference for this generation of console is just how far AMD has come with their CPU architecture. The Xbox One and its various revisions were powered eight AMD Jaguar CPU cores, at 1.75 GHz in the Xbox One and One S, and 2.3 GHz in the One X. Originally designed for small, low-power (and low-cost) systems, Jaguar was not the best CPU architecture when it launched. And following the years since then serving as the heart of the last generation of consoles, Jaguar is definitely feeling the pinch in 2020.

For the Xbox Series X|S lineup, Microsoft is again turning to AMD, and this time AMD is ready and waiting for Microsoft with their much more powerful Zen 2 CPU cores. In the case of the Xbox Series X, it is offering eight cores which will run at 3.8 GHz sustained on eight threads, or if the developer chooses to leverage Simultaneous Multithreading (SMT) and run sixteen threads, the processor will run at 3.6 GHz sustained. The lower-powered Series S offers the same number of cores, but at 3.6 GHz / 3.4 GHz instead. Some may wonder why they do not match the 4 GHz+ frequencies of the desktop counterparts, but consoles are more about consistent experiences than peak performance for a short time, so there is no turbo function in the Xbox.

To highlight just how great the difference in performance is between the old Jaguar cores and AMD's Zen 2 cores, we'll start with a quick look at Cinebnech R15. We have been lucky enough to actually benchmark the Xbox One SoC, with eight Jaguar cores running at 2.3 GHz, matching the CPU frequency of the Xbox One X. Unfortunately, there is no exact replica of a Zen 2 processor to compare, but the Ryzen 7 3700X we tested offers the same eight cores and sixteen threads, although with a 4.4 GHz turbo frequency. So we'll go ahead and extrapolate from the score for AMD's Ryzen 7 3700X CPU to account for the slower clockspeeds of the new Xboxes,

The previous generation consoles were significantly CPU limited, and while this was not always noticeable in gameplay, the new generation should be able to offer much more immersive scenes with more going on at any one time thanks to the major CPU performance increase – even on Series S.

Of course, a major part of any console is the graphics processing unit. And even more so than on the CPU side, Microsoft's choice of architecture for the GPU side of their console SoCs is on the absolute cutting edge thanks to AMD's RDNA 2 architecture. In fact, at launch, the Xbox Series X will have a more modern AMD GPU than is available in any PC since AMD is not releasing RDNA 2 to the PC until 8 days after the console launch. RDNA 2 brings about some major upgrades to AMD’s GPU lineup which the Xbox team will leverage to get the most out of the new hardware. 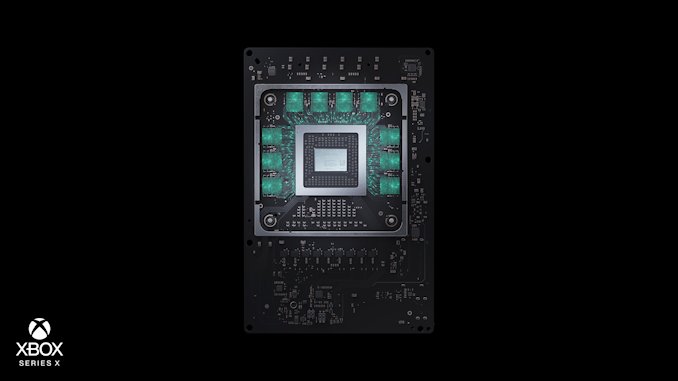 One of the biggest changes is the inclusion of hardware support for ray tracing, and as Microsoft has implemented DirectX Ray Tracing (DXR) support, the hardware and software will finally be available in a console for developers to leverage ray tracing for scene lighting. It will no doubt come at a performance penalty, as it is still a massively complex and computationally expensive task to use ray tracing for lighting, but for games that can handle the performance loss, the quality of the lighting, reflections, and other effects should increase tremendously.

Not to be outdone, shaders have also seen some tremendous improvements with this generation, and the Xbox is taking advantage of all the improvements. Mesh shaders allow highly complex scenes to be rendered by having threads cooperate, so thousands of geometric objects can be shaded from a relatively low number of shaders. Imagine a beach where every grain of sand needs to be rendered. Since most of the grains of sand are similar, mesh shading allows for a significant amount of replication to be avoided, without taking away from the overall image quality. There is a lot more to mesh shaders than just this example, and they will require new game engines to take advantage of the new shader processes, but we should start to see this in next-gen titles in the future.

RDNA 2 also brings Variable Rate Shading (VRS) to the table, which allows developers to concentrate their resources where it is important. In any one scene, not all of the image display is going to be noticed, so VRS allows the developer to focus the performance and image quality on the parts of the scene that are the most important by reducing the shading quality in those unimportant areas. This allows for higher frame rates, ideally without a noticeable impact on visuals. We are seeing this already implemented at launch in games optimixed for the X|S lineup, such as Gears 5.

Adding to the new hardware features is the varying sizes of the integrated GPUs inside of the Xbox Series X|S. On the CPU side, the consoles are similar in hardware, but on the GPU and other fronts, the Series S and Series X most definitely diverge. The GPU is certainly one of the most obvious changes here, as Microsoft has outfitted the Series X with a beefy 12 TFLOP GPU, with 52 CUs, and a 1.825 GHz frequency. This is slightly smaller than the Radeon RX 6800 announced at the end of October but still double the TFLOPS of the Xbox One X (and more efficient on top of that). The Series S is a much smaller GPU, with 20 CUs, 1.565 GHz frequency, and 4 TFLOPS total.

A critical feature of any console is the memory, and not only how much in total, but how much is available to developers and how fast it is as well. Here the Series X and Series S diverge significantly again, with the X clearly focused on maximizing performance to drive a 4K resolution, and the S clearly focused on price.

The Xbox Series X offers a 320-bit wide system bus, which is actually a bit narrower than the outgoing Xbox One X, which had a 384-bit wide bus. But, thanks to GDDR6, the bandwidth is simultaniously both slightly better and much better. Which seems like an odd thing to say, but the Xbox Series X does not offer a uniform memory interface; instead there are different channels of memory addressing different amounts of memory by virtue of using different GDDR6 chip sizes (either 8 Gbit or 16 Gbit). This results in an asymmetrical maximum bandwidth, with 10 GB of the memory available at up to 560 GB/s, and 6 GB of the memory available at 336 GB/s. The Xbox One X, in comparison, offered 324 GB/s across its entire memory space. The higher-bandwidth portion is completely free for developers, with the Xbox system reserved memory living on the slower 6 GB, leaving 3.5 GB of it available for developers.

The memory situation on the Series S is much different though. This system, to save cost, and due to its lower performance target, has just a 128-bit wide bus, and while it still offers an asymmetrical memory layout, all 8 GB of developer reserved memory is available at one speed, which is 224 GB/s. The 2 GB of system-reserved memory is just 56 GB/s, but that should be plenty for the dashboard.