Samsung has dominated the SSD market for a very long time, and every new consumer SSD model the company introduces is noteworthy. The latest product to reach the shelves is the new range of 870 EVO SSDs, building on a decade-long legacy of SATA SSDs. We have tested the 1 TB and 4 TB models from this new product family.

Samsung is one of the few companies still putting significant effort into SATA SSDs and releasing new consumer SATA models. As PC OEMs have overwhelmingly switched to using NVMe SSDs in new systems, even on the smaller capacities, the client/consumer SATA SSD market now exists almost entirely for the sake of DIY system builders and aftermarket upgrades on older systems. Most major consumer SSD brands have either stopped updating their SATA models, or decided to quietly update components without the fanfare of a new model release. Then there are companies creating odd-ball models, such as a 15.36 TB design. Either way, we don't get many new consumer SATA SSDs in for review these days.

(It is worth noting that the enterprise SATA SSD market has seen somewhat more in the way of visible activity, because the longer product lifetimes in that market and the higher profit margins give SATA SSDs more of a long tail of commercial relevance.)

Despite this market shift, Samsung is still focused on a SATA product line, although even Samsung is showing reduced interest in SATA. It took over six months from the release of the QLC-based 870 QVO for its TLC-based 870 EVO sibling to arrive, and there's still no sign of an MLC-based 870 PRO model (or any other MLC SSDs from Samsung based on anything newer than their 64-layer 3D NAND). Furthermore, the new 870 EVO no longer caters to either mSATA and M.2 SATA form factors, focusing solely on 2.5-inch drives. The mSATA version of the 860 EVO disappeared from the market last year, but the M.2 SATA version is still readily available and has tracked market price trends as much as Samsung's drives ever do. It's a bit of a surprise that they're dropping M.2 SATA this soon given how long Samsung supported mSATA. 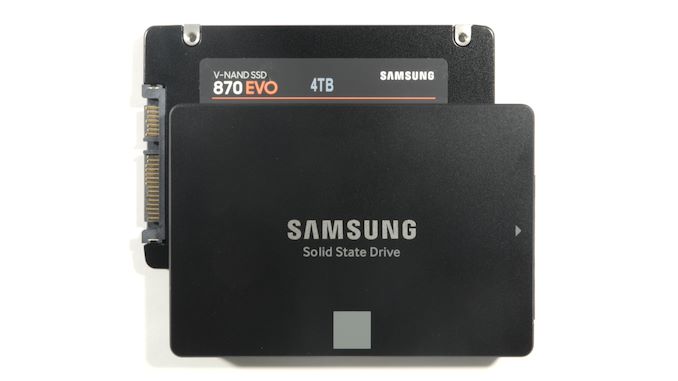 Given the roughly three-year cadence Samsung has set for their SATA SSD updates, the 870 generation may also be the last.

We are seeing the usual upgrades in the spec table for the 870 EVO compared to the 860 EVO from 2018. The controller is now Samsung's MKX, a minor iterative update to the 860's MJX. The NAND flash memory is a more significant jump: the 870 EVO is using Samsung's 128-layer 3D TLC, first seen on the 980 PRO. More specifically, our 1TB and 4TB 870 EVO samples are using the 512Gbit dies that were introduced on the 2TB 980 PRO, a model that arrived much later than the smaller capacities built around 256Gbit dies. The preceding Samsung 860 EVO launched with Samsung's 64L 3D NAND, and they appear to have skipped over their 92L generation with their TLC SATA drives.

The performance specifications are very similar to the 860 EVO. Almost all of those performance numbers are limited either by the throughput of the SATA interface or the latency of the NAND itself, so most of the performance numbers are the same across the entire capacity range. The 250GB and 500GB models still have significantly lower sequential write speed after the SLC cache runs out, but this time we don't have official numbers on SLC cache sizes (but we have tested that in this review). On the other hand, Samsung continues to be one of the few brands to provide performance specifications for queue depth 1 in addition to the high queue depth ratings.

Internally, the 870 EVO continues to illustrate just how ridiculously oversized the 2.5" form factor is for modern consumer storage. Even the 4TB model's PCB takes up just a fraction of the internal space, and the 1TB model's even smaller PCB has only a handful of tiny components for the power regulation on its back side—this could have easily been a single-sided board if Samsung wasn't saving space for the extra flash on the 2TB model. 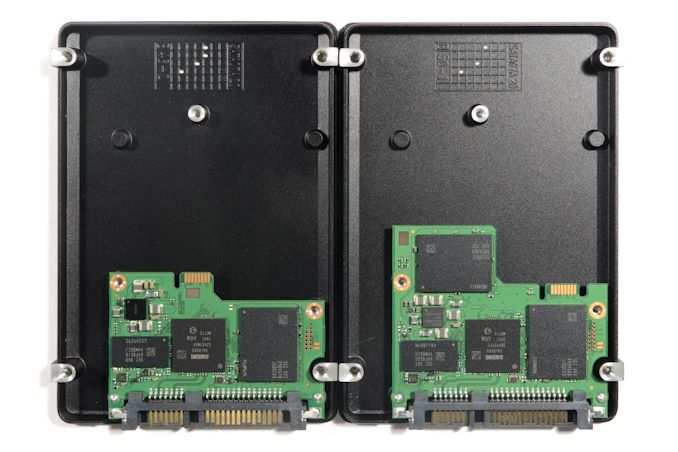 The SATA Competition: Hard to Determine

Truth be told, there aren't that many new SATA SSDs on the market. To put this into perspective, the most recent SATA competitor we reviewed, the SK hynix's Gold S31, was launched in 2019.

Part of this is down to the lack of focus on the SATA market as mentioned above, but also because SSD vendors have taken to silently updating the hardware inside a product line without changing the product number or announcing the change. Their argument is that as long as they can still achieve the same performance listed in the specification sheet, and adhere to the warranty, the customer shouldn't have to worry about what is actually inside the product.

We generally disapprove when SSD vendors silently swap out major components without renaming a product, because changing the SSD controller or NAND flash can have a major impact on a drive's performance and power efficiency. Unfortunately, this has long been a common practice for entry-level models, and a few manufacturers have tried it on more upmarket models and been deservedly excoriated when they're caught (eg. ADATA, with the SX8200 Pro).

However, for mainstream SATA SSDs based on TLC NAND and controllers with DRAM caches, there's a lot less potential downside for consumers when the manufacturer silently upgrades the NAND. The SATA interface imposes such a severe performance bottleneck that it's unlikely new NAND would result in a slower drive. Switching to newer NAND with a higher per-die capacity could adversely affect the smallest models in a product line, but the tendency has been for 120GB models to simply disappear instead of being updated—and they aren't missed. We're disappointed that (for example) Micron's Crucial MX500 is now shipping with at least 96-layer NAND rather than the 64-layer NAND it launched with, and likely with Silicon Motion's SM2259 controller that features improved error correction over the SM2258.

The other factor in this is that we recently updated our SSD test suite for 2021, which means re-testing older drives for new performance numbers. In our SSD test suite 2021 article, we prioritized NVMe SSDs, as that is where the market is. We are getting around to retesting the older SATA drives, although these take the longest time to complete - 24 hours for a fast 1 TB drive, up to 100 hours or more for a 4 TB drive, not including the analysis.

So while we're a bit lacking in SATA review samples that reflect the current state of the market, we do have a diverse selection of entry-level NVMe SSDs that have been pushing into the SATA SSD price bracket. These may not be viable alternatives for some use cases (older systems that don't support NVMe, or data hoarders that need lots of multi-TB drives), but for any reasonably recent consumer system with ordinary storage needs, these NVMe drives are real competitors to SATA SSDs. That's the focus on this review.