First AMD B550 With Thunderbolt 4: The ASUS ProArt B550-Creator

From a post by ASUS's Technical Product Marketing Manager (u/ASUSTechMKTJJ) on Reddit, ASUS looks to be readying up a new B550 motherboard based on its ProArt series. The ASUS ProArt series primarily aims to provide to creators, and its new ProArt B550-Creator is the first AMD AM4 motherboard to benefit from Intel's updated Thunderbolt 4 controller. Also included are an advertised 12+2 phase power delivery and dual 2.5 GbE networking.

Similar to previous iterations of its ProArt motherboard, such as the ASUS ProArt Z490-Creator 10G, it follows a simplistic design with straight lines provided by a pair of rectangular M.2 and an L-shaped power delivery heatsink. Keeping in line with its basic theme, it omits any integrated RGB LED lighting. ASUS advertises the B550-Creator as including a 12+2 phase power delivery with teamed power stages, with an 8-pin and 4-pin 12 V ATX CPU power input pairing providing power to the processor. 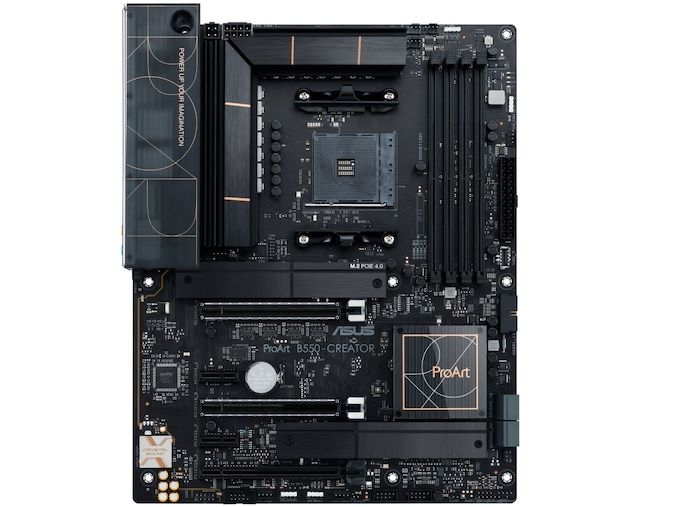 Currently, ASUS hasn't revealed detailed specifications, but we can see that the ProArt B550-Creator includes three full-length PCIe slots, with the top likely conforming to PCIe Gen4 with the bottom slot most probably driven by the B550 chipset. It includes two PCIe 3.0 x1 slots, with four SATA ports for storage, with possibly two PCIe M.2 slots due to the location and length of the pair of M.2 heatsinks featured on the board. It includes four memory slots with up to 128 GB of capacity, but ASUS hasn't provided information on supported speeds.

Much of the fanfare surrounding this announcement is the inclusion of Intel's latest Thunderbolt 4 controller, which looks to be the first time it has been implemented on an AM4 model. This is present on the rear panel of the ProArt B550-Creator with two Thunderbolt 4 Type-C ports, a single DisplayPort input, four USB 3.2 G2 Type-A, and two USB 2.0 ports. Also present on the rear panel is a pair of 2.5 GbE ports which ASUS hasn't specified which controller it's using, with a PS/2 combo port, one HDMI video output, and a small BIOS Flashback button. Finishing off the rear panel is five 3.5 mm audio jacks and single S/PDIF optical output, which is powered by a Realtek ALC1220A HD audio codec.

The ASUS ProArt B550-Creator motherboard is expected to be released sometime in April with an expected MSRP of $299.