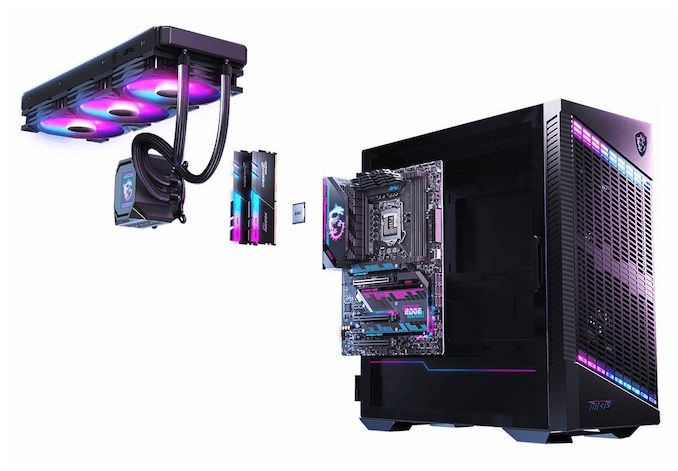 At an all-digital rendition of Computex 2021, MSI has unveiled a new bundle designed for gamers looking for a comprehensive and optimized gaming system. Based on its performance gaming series, the MSI MPG Gaming Maverick bundle comes complete with an Intel Core i7 11th generation Rocket Lake processor and special edition components, including G.Skill Trident Z Maverik DDR4 memory, an MSI MPG Z590 Gaming Edge WIFI SP motherboard, and an SP edition Coreliquid 360 mm AIO. All of this comes inside of an MSI MPG Velox 100P SP special edition chassis.

The MSI MPG Gaming Maverik is a premium bundle offering gamers a semi-prebuilt system (minus storage, power, and graphics), with a set of special edition "MSI SP" componentry. MSI hasn't specified what the SP stands for, but the general theme follows black, with pink, purple, and blue accentuation throughout. The motherboard of choice for the system is the same specification as the regular MSI MPG Z590 Gaming Edge WIFI, but with the SP design. It includes plenty of premium features, including three M.2 slots (one PCIe 4.0 x4), six SATA, USB 3.2 G2x2 Type-C connectivity, as well as Intel's I225-V 2.5 GbE controller, and an Intel AX210 Wi-Fi 6E CNVi.

The Gaming Maverik bundle also comes with 32 GB (2 x 16 GB) of special edition G.Skill Trident Z Maverik DDR4-3600 memory. The memory itself has latency timings of 18-22-22-42, with an operating voltage of 1.35 V. It operates in dual channel mode and is only available as part of the Maverik bundle itself. 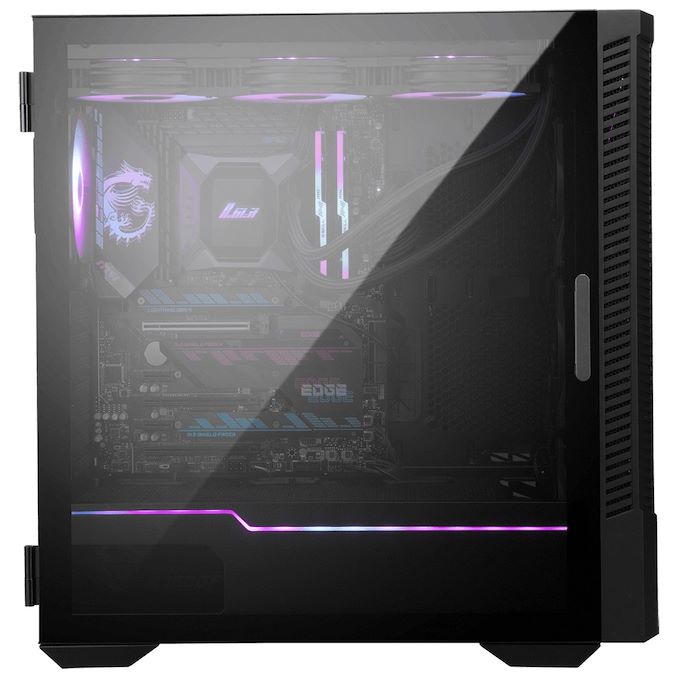 At the heart of the MSI MPG Gaming Maverik bundle is Intel's Core i7-11700K Rocket Lake processor, with eight cores, sixteen threads, and a boost frequency of 4.8 GHz. Keeping it cool is an MSI MPG Coreliquid K360 SP 360 mm AIO CPU cooler, with everything preinstalled before shipping. The CPU cooler itself uses a 2.4" LCD on the pump for visual effect and comes with three 2500 RPM ARGB cooling fans. Everything within the bundle is preinstalled for users to drop storage, a power supply, and a graphics card in, with the case of choice being MSI's MPG Velox 100P Airflow SP. The bundle has matching hardware throughout and uses a gaming-inspired and futuristic design, quite similar to the look of the original ASUS ROG Strix series.

The MSI MPG Gaming Maverik bundle will be available to buy from June, with only a limited quantity available. At the time of writing, MSI hasn't given us any pricing information.