The ASUS UEFI firmware is consistent throughout its range, especially its AMD and Intel-based Republic of Gamers models. The GUI design consists of the red and black ROG design users are familiar with, with a dark grey central panel, with yellow and white text. ASUS includes two modes for users of different experience levels, including an 'EZ Mode' for beginners, and an advanced for more experienced users. 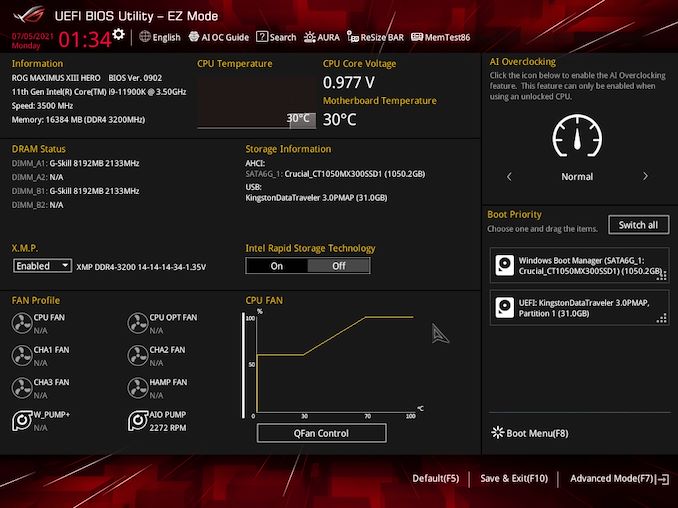 Entering the firmware for the first time will revert users to the EZ mode, which has a variety of access points to different features that the BIOS offers. In the top left-hand corner is a list of information including the model of the motherboard (Hero), which processor is installed, as well as the default clock speed and basic information on how much memory is installed and at what speed it is running at. Users can enable X.M.P 2.0 profiles on compatible and support memory at the click of a button, as well as view current fan speeds for each of the eight 4-pin headers. On the right-hand side, users can adjust the boot priority, as well as enable ASUS's AI (assisted intelligence) overclocking profile. 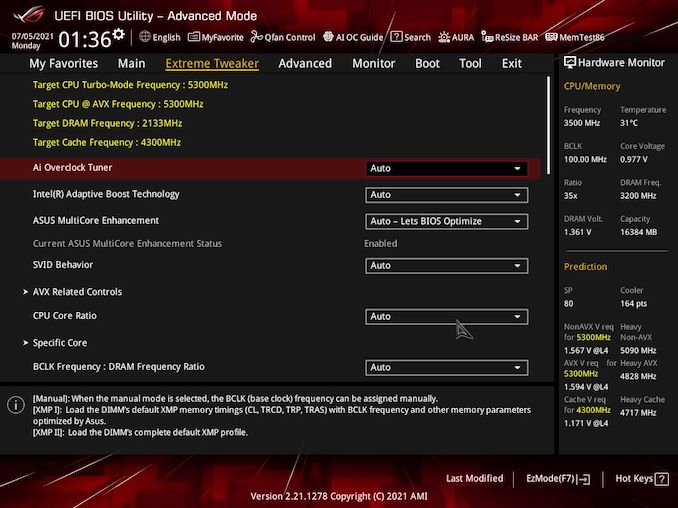 Pressing the F7 key will alternate between the EZ mode and the Advanced modes. In the Advanced section of the BIOS is all of the settings to change chipset specific features, Intel's Thermal Velocity Boost (TVB), power options, and also overclock the CPU, memory, and integrated Intel UHD graphics. In the Extreme Tweaker section, users can enable X.M.P 2.0 memory profiles, perform manual memory overclocks, and even alter the Geared memory ratio (1:2/1:1) depending on how hard the integrated memory controller is being pushed. There are extensive options for overclocking memory latencies, as well as some preset overclocks for enthusiasts with high bin memory, designed for overclocking. ASUS also offers plenty of CPU overclocking options, including AVX offsets for dialing down clock speed to ensure stability with AVX heavy workloads, as well as options to overclock the Cache, CPU Core frequency, and make adjustments to loadline calibration (LLC) and voltage settings.

Other notable mentions in ASUS's ROG firmware include the ability to calibrate settings based on the effectiveness of the cooling method used, with options for adjusting the potency of how aggressive the settings might be. ASUS also includes its Q-Fan tuning utility which allows users to customize fan curve profiles, or allow the firmware to calibrate it for them.

Overall the ASUS ROG firmware is consistent, responsive, and is the most feature-full and option-laden BIOS we've seen on Z590 so far.

Most of ASUS's software package revolves around two core utilities, the ROG Armory Crate, and the ASUS AI Suite. ASUS includes a dedicated pool of memory with the ROG Armory Crate onboard and allows users to download the latest client upon first entering Windows. 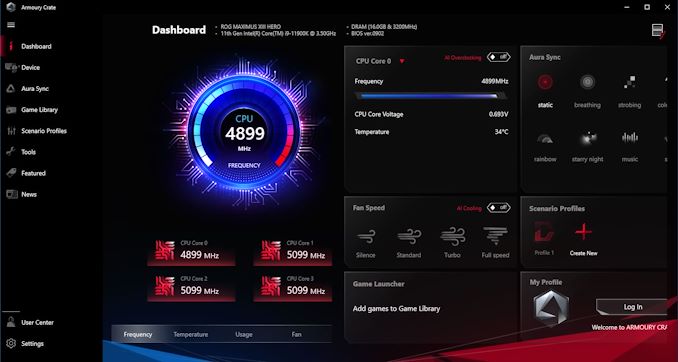 The ASUS ROG Armory Crate isn't just a piece of software to get users going out of the box, but it's now a hub for a plethora of settings, with lots of functionality. This includes the Dashboard, which includes a futuristic and aesthetically pleasing GUI, and displays the current frequency of each of the cores on the installed processor. Users can enable ASUS's AI overclocking profile within the software, as well as customize the RGB via a small Aura Sync panel on the right-hand side. Users can turn ASUS's AI cooling tuner on or select between Silence, Standard, Turbo, and Full-speed fan profiles which syncs across all of the eight 4-pin fan headers. Users can also use the tools section to update the systems drivers, utility, or update the board's firmware. 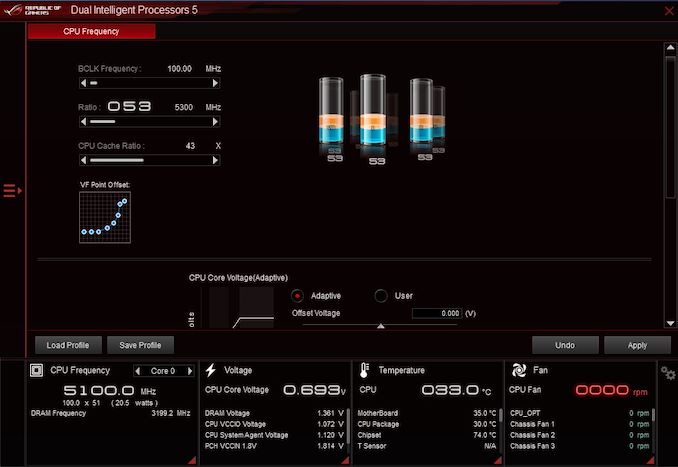 Looking at ASUS's long-running AI Suite, this allows users more intuitive access to some of the board's core features all within Windows. Users can overclock the CPU, enable the AI Overclocking function, as well as enable and customize the 5-way Power Optimization technology which has been on ASUS's motherboards for a good number of years now. Users can access the Fan Xpert 4 profiles or customize their own, as well as change CPU power phase profiles, VRM switching, and CPU power thermal controls which are all vital in overclocking with Rocket Lake for the best results.

Overall the software bundled with the ASUS ROG Maximus XIII Hero is intuitive, easy to navigate, and feature-laden for users. Those looking to customize not only the aesthetic appearance within Windows but perform overclocks and power customizations within Windows should be satisfied with what ASUS has to offer.