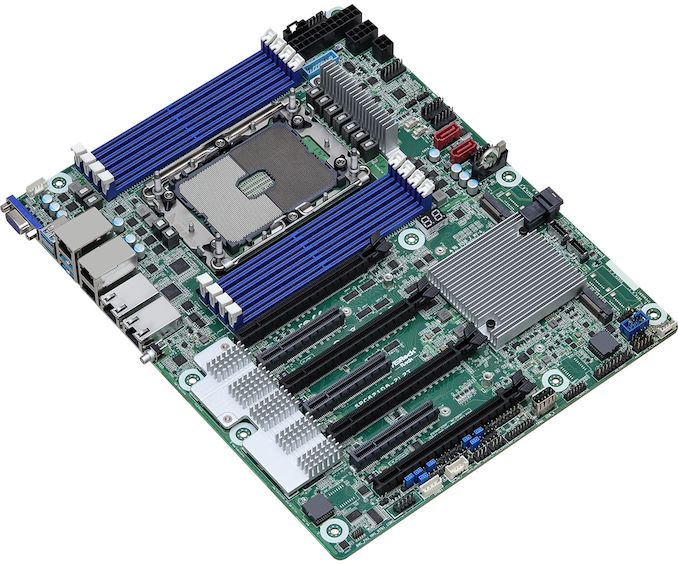 On the surface, both the ASRock Rack SPC621D8-2L2T and the SPC621D8 share the same core feature set, which includes four full-length PCIe 4.0 x16 slots and three half-length PCIe 4.0 x8 slots. Three of the full-length slots will automatically switch down to PCIe 4.0 x8 when the lower half-length slot is populated. Sitting on either side of the transposed LGA4189 socket are eight memory slots that are arranged into two banks of four. These slots can support up to 2 TB of DDR4-3200 memory, in the form of RDIMMs and LRDIMMs. 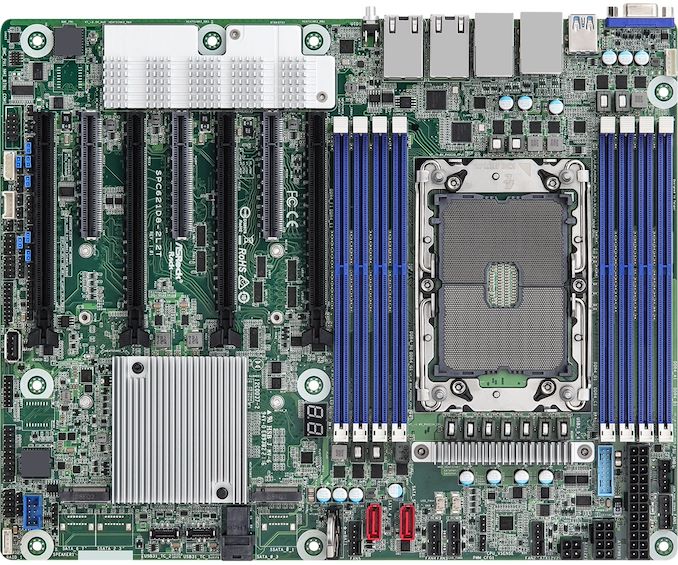 The ASRock Rack SPC621D8-2L2T and the SPC621D8 both include a varied selection of storage options, including one PCIe 3.0 x4/SATA M.2 slot and one PCIe 3.0 x1/SATA M.2 slot. The SPC621D8 has support for up to thirteen SATA ports, with six 7-pin headers included from the C621A chipset with support for RAID 0, 1, 5, and 10 arrays. The SPC621D8-2L2T has support for eight SATA ports, with the same level of RAID support. Both models include two SATA DOM headers and also include a mini-SAS HD header.

Driving the management side of things is an ASPEED AST2500 BMC controller. This can be accessed via a single D-sub video output or a dedicated management Ethernet port hooked up to a Realtek RTL8211E Gigabit controller. Both variants include various headers around the board, with some of the most notable which include a TPM header, COM header, PMBus connector, and an IPMB header. There are five 6-pin fan headers for cooling, one 24-pin 12 V ATX power input that provides power to the motherboard, and one 8-pin and one 4-pin 12 V ATX CPU power input pairing.

Both boards share a similar rear panel layout, but with one major difference. The ASRock Rack SPC621D8-2L2T includes dual 10 GbE via an Intel X710-AT2 Ethernet controller, which is on top of the two Intel I210 Gigabit controllers and the Realtek RTL8211E management LAN port that are common to both boards. Both panels include a D-sub video output for the BMC, four USB 3.2 G1 Type-A ports, and a UID indicator LED button.

We don't have pricing for either the SPC621D8-2L2T or the SPC621D8 ATX motherboards or when they will hit retail shelves at the time of writing.