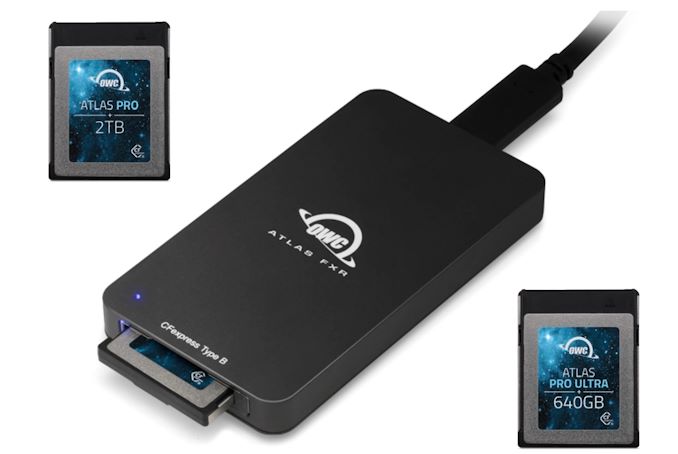 OWC is introducing a number of CFexpress products as part of their 2022 CES announcements today. The new Atlas Pro and Atlas Pro Ultra CFexpress cards join the Atlas FXR Thunderbolt / USB card reader to expand OWC's offerings in the media storage / card reader space. These products are CFexpress Type-B ones, and are backwards compatible with XQD.

The OWC Atlas series of media cards was augmented with the Atlas S Pro UHS-II V90 SDXC model recently. The differentiating aspect about these cards is that OWC advertises the use of pseudo-SLC (pSLC) flash with claims of 10x the endurance of other cards in the market. The claimed real-world speeds are also slightly higher than other V90 UHS-II cards - read/write rates of up to 290/276 MBps. Today's introductions expand the Atlas series into the CFexpress space.

The Atlas Pro cards come in capacities ranging from 256GB to 2TB. Peak read/write speeds are around 1700/1400 MBps, allowing them to be used for RAW footage capture. The Atlas Pro Ultra is available in two capacities - 320GB and 640GB. The key difference between the two families is the guaranteed sustained write rate of 1224 MBps for the latter, with peaks of 1500 MBps writes and 1700 MBps reads. This write rate allows for the usage of the card for 8K capture and high frame rate bust mode photo captures.

The Atlas FXR CFexpress Type-B card reader is a bus-powered pocket-sized device operating at speeds of up to 1500 MBps when used with Thunderbolt 3 / Thunderbolt 4 ports and up to 900 MBps with USB 3.2 Gen 2 Type-C ports. The plug-and-play reader is bundled with a Thunderbolt cable along with an attached USB-A adapter for compatibility with a wide range of systems.

OWC expects the CFexpress offerings to be available for purchase in early Q2 2022. Pricing for the new products was not officially specified, though some distributor documents from late 2021 indicate the planned pricing of the Atlas Pro 256GB to be at $159 and the Atlas Pro Ultra 320GB at $349.