During CES 2022, ASUS announced its H670, B660, and H610 motherboards designed for Intel's 12th generation Alder Lake processors. Among the launch of five new ROG Strix models for Intel's more budget-friendly B660 chipset, perhaps the most interesting of these is the ROG Strix B660-I Gaming WIFI. With its small mini-ITX sized frame, it boasts support for DDR5-6200 memory, 2.5 GbE, and Wi-Fi 6 networking, as well as support for two PCIe 4.0 x4 M.2 drives.

Much of the motherboard announcements at CES 2022 have been around Intel's latest 600 series chipsets, the H670, B660, and H610. For the most part, these new motherboards have been focused on users looking for an affordable entry point onto Intel's 12th generation Alder Lake desktop platform. The vast majority of these either come with ATX or micro-ATX sized PCBs. One designed for the small form factor enthusiasts looking to build a cheaper mini-ITX system compared to Z690 is the ASUS ROG Strix B660-I Gaming WIFI. 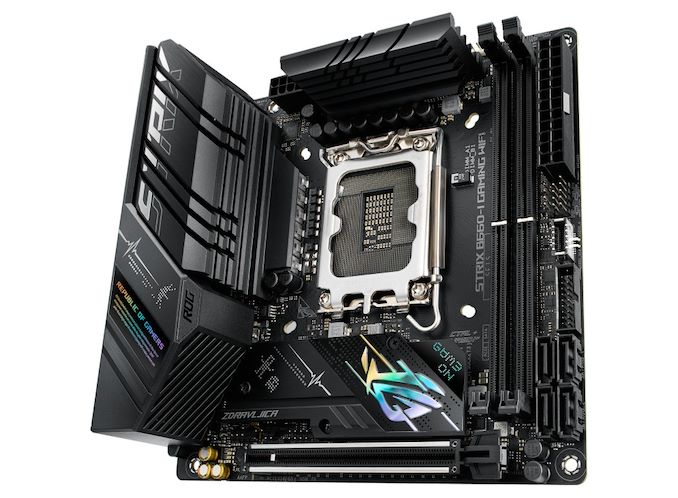 Some of the most notable features of the ASUS ROG Strix B660-I Gaming WIFI include one full-length PCIe 5.0 x16 slot, support for up to two PCIe 4.0 x4 M.2 drives, and four SATA ports that can support RAID 0, 1, 5, and 10 arrays. The board also supports the latest DDR5 memory, with speeds of DDR5-6200 and a total capacity of up to 64 GB supported across two memory slots.

Although we don't have an image of the rear panel, we know the ROG Strix B660-I Gaming WIFI includes one USB 3.2 G2x2 Type-C, one USB 3.2 G1 Type-C, three USB 3.2 G1 Type-A, and three USB 2.0 ports. For networking, there's one Ethernet port powered by an Intel I225-V 2.5 GbE controller, as well as an Intel Wi-Fi 6 CNVi. ASUS uses one of its Realtek-based SupremeFX S1220A HD audio codecs that control five 3.5 mm audio jacks. Finishing off the rear panel is a pair of video outputs, including one HDMI 2.1 and one DisplayPort 1.4.

ASUS hasn't provided us with any information on when the ROG Strix B660-I Gaming WIFI will be available or how much it might cost.