Apple's MacBook Pro: Using it as a Mac and a PC

The Most Powerful Apple Notebook Ever

The heart and soul of the MacBook Pro is the Intel Core Duo processor, which is available in 1.83GHz, 2.0GHz and 2.16GHz flavors in the notebook. Although it is the same Core Duo processor used in PC notebooks, Apple has refrained from using Intel's model number system to avoid confusion within their user base. Later this year Intel will introduce a 2.33GHz Core Duo processor, which will most likely replace or augment the 2.16GHz part at the high end of Apple's offerings. Of course by the end of this year, Intel will be shipping Merom, the mobile version of Conroe, and it is backwards compatible with currently shipping Core Duo platforms. While the currently shipping MacBook Pros should be compatible with future Merom chips, the Core Duo processor is actually soldered onto the motherboard and is socketless; that means there's no removing, replacing or upgrading your CPU. 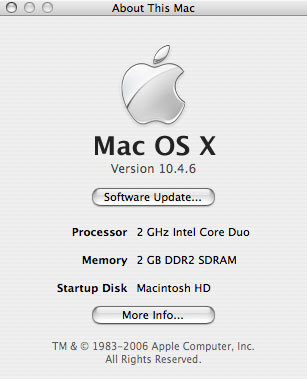 I am disappointed to say that battery life really hasn't been improved over my old PowerBook G4. General usage still leaves me with less than 3 hours of battery life, which is disappointing since Core Duo is supposed to be the CPU to bring us to the 5 hour marker.

The MacBook Pro features Intel's 945 Express chipset, but opts for a faster external graphics solution rather than rely on Intel's integrated graphics. Being based on the 945 of course means that it features a dual channel DDR2-667 memory controller, but in order to take advantage of that you have to populate both SO-DIMM slots on the MacBook Pro. There is no performance benefit however to enabling dual channel mode; remember that the Core Duo only features a 64-bit wide 667MHz FSB, and without integrated graphics a single 64-bit DDR2-667 channel can offer enough bandwidth to saturate that bus. If the future MacBooks (non-pro) do ship with integrated graphics, you may want to install memory in pairs as dual channel will matter there.

The results are what they should be: there's no benefit to enabling dual channel mode on the MacBook Pros.

A very unfortunate limitation of the MacBook Pro is its 2GB memory size, meaning that at best you can install two 1GB DDR2-667 SO-DIMMs in this system and that's all. It's unfortunate because OS X does an extremely good job of taking advantage of additional memory. When I started using OS X I initially hated the idea that closing all the windows of an application wouldn't actually close the application itself. However the more I used OS X, the more I realized that I didn't want to close the applications I used a lot; I wanted their windows out of the way but I wanted the ability to switch to them without waiting on the hard drive to load up that program again.

Leaving just about every application I use open all the time and not having to worry about my system getting slow over time was a bit of a new experience for me, but it was a welcome one. However, getting addicted to leaving everything open all of the time also made me want and appreciate what the PC user in me would consider to be a ridiculous amount of memory. While anything above 2GB would generally go unused on my PC, I've found that on my desktop Mac around 4GB ends up being the sweet spot. Needless to say, a 2GB memory limitation on the MacBook Pro is a bit of a disappointment. Admittedly, I haven't actually tried sticking 4GB in there to see if it is an actual limitation or a guideline to avoid installing memory modules that are physically too big for the unit.

As always, if you want more memory your best bet is to not order it from Apple. The 1.83GHz MacBook Pro comes with 512MB of DDR2-667 standard, and to upgrade it to 1GB Apple asks for an additional $100. If you want a single 1GB DIMM instead, you pay Apple $200. The most ridiculous upgrade price is the $500 cost for 2 x 1GB modules. The same applies to the 2.0GHz MacBook Pro; stock it ships with 1GB of memory, but adding a second 1GB stick tacks on an additional $300 to the cost of the notebook.

We went to Crucial and found MacBook Pro compatible memory for close to half the cost of Apple's upgrades. A 512MB stick will run you $77 at Crucial, but the real steal (compared to Apple's pricing) is a 1GB stick that will cost $162. For the cost of a 1GB upgrade to the MacBook Pro 2.0GHz you can almost get a pair of 1GB sticks from Crucial. The choice is pretty simple. 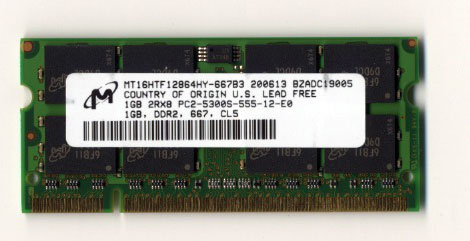 Of course we went the Crucial route and the memory worked perfectly.