I was excited when Apple finally introduced an easily accessible drive bay for the MacBook Pro. Apparently that was short lived because it’s no longer there on the new unibody MacBook Pros.

The old removable battery and HDD bay, both gone

While the lack of any screwless removable panels makes the new MacBook Pro even more sturdy than its already herculean predecessor, it does mean that to swap hard drives you need to remove ten screws to get the bottom cover off then another two to get the hard drive out. 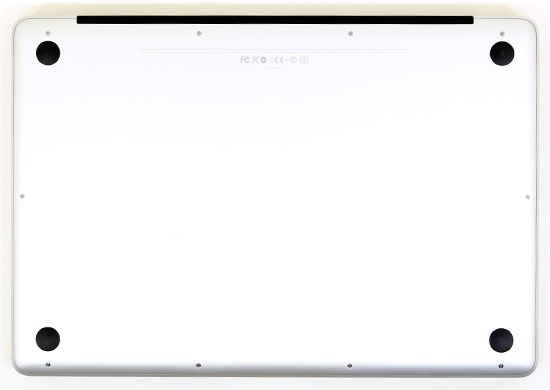 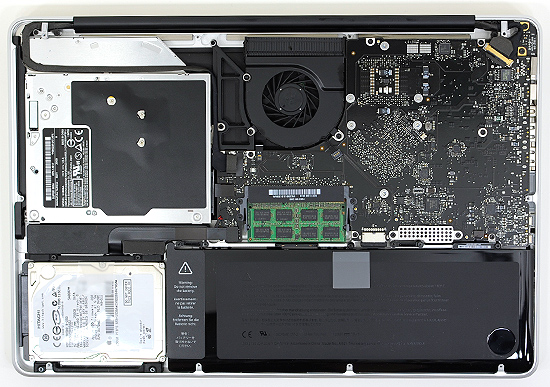 The new MacBook Pro. Remove 10 screws and you can access everything. HDD (lower left), memory (center) and battery (lower right)

The integrated battery is actually very easy to remove, provided you have the right screwdriver. After you remove the bottom cover there are just two screws between you and removing the battery. There’s a big sticker telling you not to and doing so would probably void your warranty, but you can at least get to it if you’d like to. According to Apple, you wouldn’t have to for around 5 years though. 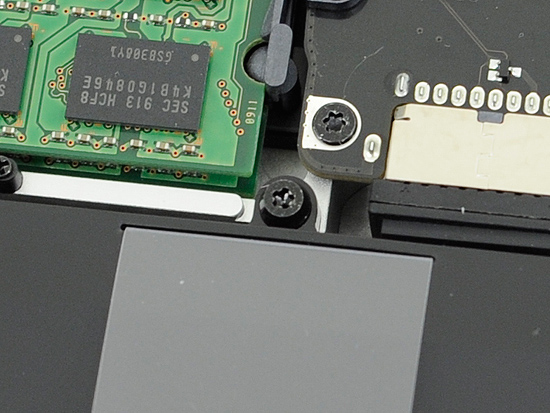 The hardware hasn’t changed much since the Fall 2008 MacBook Pros. Apple ditched the ExpressCard/34 slot and replaced it with a SD card slot. The SD slot is nice but I do most of my shooting with a CF based DSLR, so I still need an external reader for my CF cards.

All of the CPUs got a speed bump. The Core 2 Duo 2.4GHz used to be in the entry level 15-inch MacBook Pro, now it’s a 2.53GHz Core 2 Duo. It’s barely more than a 5% increase in clock speed, so I wouldn’t expect anything more than a couple percentage points of a performance boost in apps. A quick sanity check on performance confirmed that; the new model is in the same league of performance as the old one. If you’d like to see how it stacks up to much older hardware, check out our review of the unibody MacBook Pro from last fall.

The missing ExpressCard slot was mostly to make room for the SD card slot, but the 9600M was most definitely a cost saving omission. All of Apple’s unibody MacBook Pros use NVIDIA’s GeForce 9400M chipset; the chipset also has a GeForce 9400M graphics core in it. This was a significant upgrade over the Intel integrated graphics that had previously been used across Apple’s line.

The original unibody MacBook Pro had two GPUs, the 9400M integrated in the chipset and a GeForce 9600M. The latter was a separate GPU linked off of the PCIe bus and designed to be used if/when you needed the horsepower. The 9600M had its own frame buffer (either 256MB or 512MB of memory dedicated to the GPU) and was easily 2x the speed of the integrated 9400M. You could switch between GPUs in software under OS X.

For the most part, the 9600M was useless on the MacBook Pro unless you were gaming under Vista or did any heavy 3D accelerated work under OS X. I’m guessing the majority of MacBook Pro users didn’t do either and thus Apple canned the 9600M in the $1699 MBP. The 9600M is still present in the more expensive 15” models and is standard on the 17” MBP.