For your extra $20 over the ASRock Extreme in terms of components, we see use of a VIA VT2020 Audio Codec with Blu-ray audio support rather than the Realtek ALC890, two SATA 6Gb/s ports (one on the rear IO panel) from a Marvell SE9128 with RAID 0/1 support, two USB3.0 ports from NEC's MPD720200, combined socket 775 and socket 1366 holes for both types of CPU cooler, and ErP certification.

The use of both new and old CPU cooler mounting holes isn't entirely a new concept, but is rarely seen on enthusiast platforms.  It also can provide problems for memory tracing on the PCB, resulting in longer pathways for CPU to RAM connections and longer latency - however, our tests later show that ASRock haven't found this a problem, and allows users to cannibalize their old socket 775 cooler.

Even though the demand for tri-GPU setups is a miniscule blip on a worldwide scale, it's going to effect the enthusiast crowd more than any other.  With the ASRock Extreme3 only giving an x16/x16/x4 layout, rather than an x16/x8/x8 option such as the ASUS P6T Deluxe, this does limit the target audience.

In the box we see the standard X58 fair of cables: 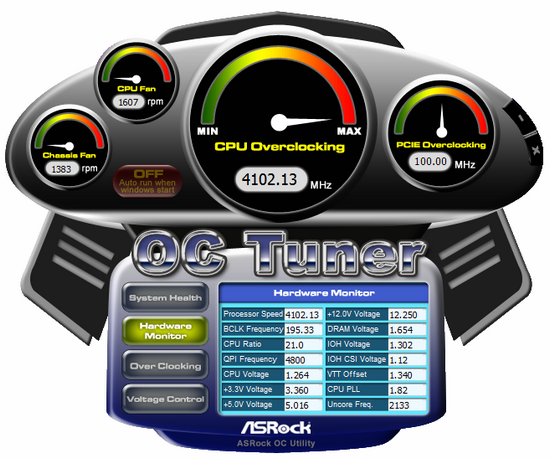 For those who wish to overclock, but do not want to get their hands dirty in the BIOS, ASRock has included their overclocking tool for the OS - OC Tuner.  The tool itself allows the user to set common BIOS voltages, CPU multiplier, the BCLK, and the PCIe speed.  Previous incantations and versions of this software have been plagued with issues, such as forcing a reboot whenever any voltages were changed.  However on the Extreme3, there were no such issues - all settings were able to be modified.  But, and this is a big but, it requires certain options in the BIOS to be chosen, so the settings can be modified, almost nullifying the point of this software.  Also, as the software does not change any RAM timings, users will soon hit a RAM wall, whereby their RAM timings are far too tight for stability.  As the ASRock BIOS defaults the RAM timings very tight to begin with (see below), an attempt at overclocking will not go very far on OC Tuner alone. 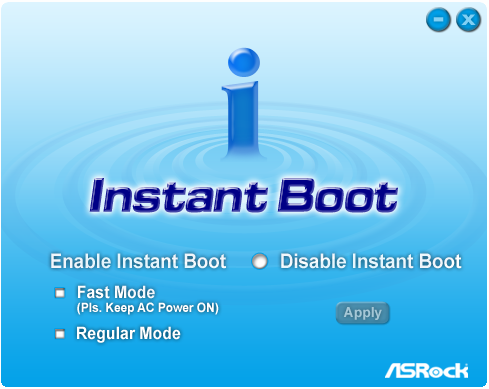 ASRock Instant Boot is designed as a timesaving piece of software, by supplying the motherboard with a BIOS bypass key and loads the state of shutdown by reading it from RAM or the HardDrive, depending on the power situation between booting.  In general, we found this works quite well, even at high overclocks.  In order to shorten the boot time, the shutdown time is considerably lengthened - every time shutdown is selected, the OS will reboot instead of shutting down, then turn itself off.  In fast mode, our overclocked system then comes back almost instantly when the power button is next pushed.   In regular mode, the boot time is reduced to under 5 seconds.

There are still issues with the software for Windows 7 which have carried on from previous ASRock boards - if Instant Boot is enabled on an admin account, and a any account (administrator or other user) initiates the shutdown, the board will not successfully do it's reboot/shutdown sequence.  On the reboot section, you will have to log in to the administrator account for it to work.  This also means that the administrator account is the only account that will be able to fully shutdown the computer through the OS.  Then when the machine is turned on again, the administrator account will already be logged in, which defeats the purpose of having different accounts for different users. 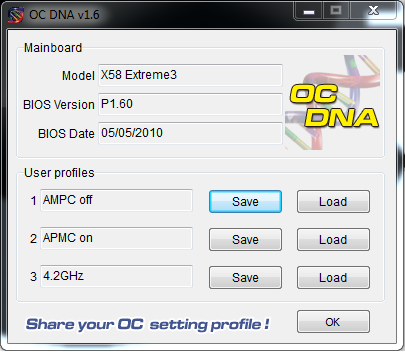 OC DNA is the afterthought of the ASRock package.  The idea of OC DNA is the ability to share BIOS settings across the internet, with friends or forums.  The software works ideally if two users have identical setups (RAM, CPU) but note that each piece of hardware will perform differently on different voltages, so using someone elses settings may work for them, but not for you. 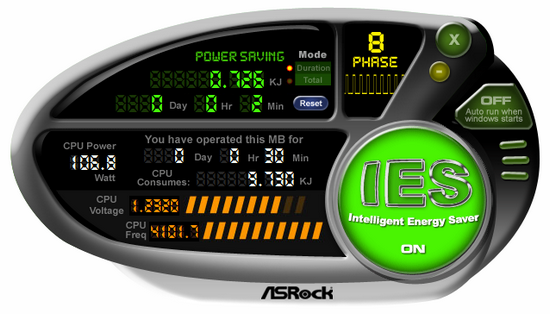 ASRock's IES is a tool to have running in the background which, when activated, will attempt to save CPU power by undervolting or declocking when the workload is low.  It is designed to keep track of how long you've had it running, and how much power it has saved you.  Using the v1.2 BIOS, on an overclocked Core i7-920 at 4.1Ghz, the program informs us that the CPU is using 50W under full load.  With the latest BIOS, this showed as 120W with IES off, and 108W with it on.  However, if your voltage settings are already fairly low for your overclock, enabling IES will crash the system.

The latest v1.6 BIOS (at time of writing) over the shipping v1.2 BIOS has had very few cosmetic changes.   Under the hood, ASRock has added compatibility for various RAM kits (namely OCZG1600LV6GK) and RAM setup/kit combinations that failed to boot (2x2GB, 3x2GB, 4x1GB, though our 3x2GB kit did work on the shipping BIOS), as well as minor USB3/SATA 6GB/s performance tweaks.  In both BIOSes though, the C3 State Package Limit setting had to be moved from Auto to C3 to allow waking from C3 successfully every time.

The BIOS layout is relatively basic compared to other boards, such as the Gigabyte EX58-UD3R.  There are no super advanced overclocking options, such as setting the timings of each individual DIMM slot, but the visual interface is easy to follow.  The BIOS has it's own self-contained flashing utility, accessible from the 'Advanced' menu.

The major gripe we have with the BIOS, apart from the C3 State issue raised previously, is the lack of continuity in voltage and timing selection.  In some parts of the BIOS, such as the BCLK, you can type in the value you want.  But you can't do that with the voltages.  Other sections of the BIOS allow you to press enter, and select from a drop-down menu the setting of choice, however most do not.  Most of the time, you'll find yourself using the plus and minus keys to sift through various settings, voltages and subtimings.

In the latest BIOS, we had issues when setting the Uncore and QPI settings on anything other than Auto.  If any selection was made, either to overclock or underclock either setting, the BIOS would set the QPI at maximum, regardless of what you have chosen.  On the next bootup, OC recovery would kick in and we had to set it back to Auto.

OC Recovery is an area that ASRock have been working on in recent boards, and the Extreme3 is almost at the level of Asus and Gigabyte.  Within the BIOS, the number of reboots to attempt new settings is selectable (from 1 to 5 - the default is 3, whereas 1 is often enough).  On a failed boot, the BIOS startup gives you 10 seconds to press the Del/F2 keys to go back into the BIOS to change the settings back - otherwise the board will boot at default settings.  This is in contrast of the Gigabyte EX58-UD3R, which requires you to press a button to acknowledge that the BIOS settings are not possible.  This is a feature we believe ASRock should adopt, and should be easy to implement.

The Auto OC settings in the BIOS provide an easy way to apply an overclock.  The BIOS auto sets the BCLK and CPU multiplier, as well as the CPU VCore, VTT and CPU PLL voltages.  All other voltages are left on Auto.  On the 4.2Ghz setting, CPU VCore was set to 1.33V, VTT to 1.58V and CPU PLL to 1.92V - although the RAM was set to DDR3-1200 and on auto voltages, despite its rating.  At an Auto OC setting of 4Ghz, the VCore was set at 1.23V.  On both these setups, LINPACK and OCCT stress testing found calculation errors on the CPU.

In our experience with the Extreme3, we were vary wary of leaving the voltages on the Auto setting.  As mentioned previously, on the boot to Windows 7, at stock settings, we found the VTT set to 1.48V and CPU PLL set to 1.92V - both at or above what was used for our 4.1Ghz overclock.  This left the southbridge and northbridge heatsinks, after a few minutes, warm to hot, leaving our fingers uncomfortable after a few moments.  The components on the board were still running well within recommended temperatures, however this could be of concern in a motionless air environment, or when coupled with high powered PCIe cards, as the heatsinks directly touch and transfer heat to any 7" or longer card.

The Auto DRAM timings, especially the advanced RAM timings, are set very tight on the Extreme3 - this is done so the manufacturer can claim better performance at stock settings.  However, this has caused incompatibility with some RAM kits, and the previous BIOS update mentioned earlier.  So for any overclocking via the BCLK, the RAM timings may require to be slackened off to achieve stability, in terms of frequency, subtimings, or an increase in voltage.  This is mainly of concern when using the OC Tuner tool in the operating system, as the advanced RAM subtimings are not controlled or controllable via the ASRock software.

The BIOS also gives options for fan control settings, in the form of 'levels'.  The CPU and NB/FET fans are controllable by this method, as are two of the fan headers on the board, although there is no option for granular control of the ramp slope per Celsius increment.

Overall, ASRock has provided a BIOS which is relatively simple, although lacking in finesse compared to what we find on similarly priced boards from ASUS and Gigabyte.