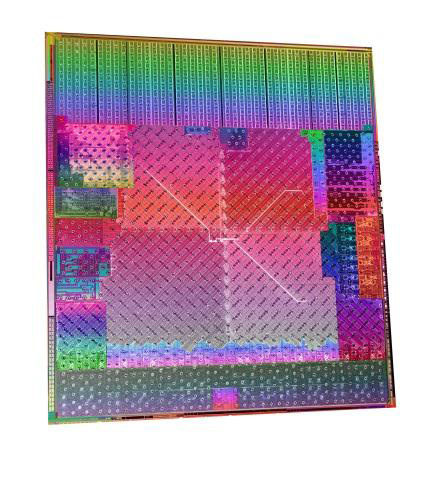 After the ATI acquisition AMD announced it would be creating a new category of microprocessors that featured integrated ATI GPUs. AMD called these hybrid CPU/GPUs Accelerated Processing Units (APUs) and it branded the entire APU strategy: Fusion.

The first Fusion project we heard about was Llano for mainstream notebooks/desktops. Llano will integrate a 32nm derivative of the current Phenom II architecture with a relatively capable DirectX 11 AMD GPU. Llano isn't due out until sometime in 2011 so details are still light. However, AMD just released some details on its lower end Fusion APUs that will begin shipping in Q4 2010 (OEM system availability in Q1 2011).

Bobcat is the CPU core. Last month we went in depth on its architecture. In short, Bobcat is an out-of-order alternative to Intel's Atom that has the potential to offer significantly higher performance. But since we're talking about APUs, Bobcat is only a part of the equation.

AMD will be shipping two Bobcat based APUs in Q4: Ontario and Zacate. Both APUs implement two Bobcat cores and a DX11 AMD GPU with an undisclosed number of cores. Ontario is aimed at netbooks/nettops while Zacate can be used in ultra thins and value notebooks/desktops.

Today at IFA in Berlin AMD announced the Ontario and Zacate TDPs as well as shared a photo of a low power AMD Fusion APU (possibly Ontario?). The Ontario APU is rated at 9W, while Zacate is rated at 18W.

Ontario's TDP is competitive. Intel's recently announced Atom N550 (dual-core Pine Trail) with on-die graphics has an 8.5W TDP, but it should be significantly slower than Ontario if AMD did its job right.

Zacate's TDP is competitive but at 18W it's in curious company. Intel's ultra-low voltage Core i3 has an 18W TDP, but the CPU should be much faster than a pair of Bobcats. The GPU side is a question here as well, but I'm guessing AMD should at least be competitive with Arrandale graphics.

The TDPs at least give us an idea that peak power consumption should be competitive between low power Fusion APUs and Intel's alternatives. Ultimately battery life is determined by performance and average power draw. Idle power should be competitive given AMD's use of power gating on the chips but we'll have to wait and see to get the full picture. 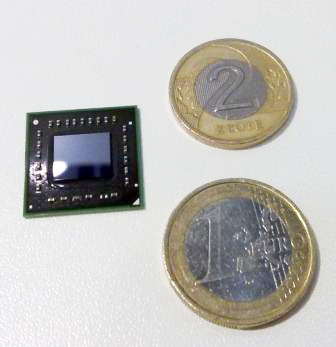 The photo above is what AMD calls a low power Fusion APU, which I presume means Ontario. Also in the photo are two coins: a 1 Euro coin and a 2 Polish Zloty coin. The Euro is bigger than the entire APU package. With a 23.5mm diameter, I'd guess Ontario's package is at least comparable to Atom's 22mm x 22mm package size. With a similar TDP and similar package size (if not smaller), Ontario should be able to fit into anything an Atom can fit in - meaning Ontario netbooks should be just as thin and just as light as Atom netbooks. They'll just be faster.

We also have an idea of die size. The Polish Zloty's inner circle measures 12mm in diameter. A quick comparison in Photoshop indicates that the Ontario die is shorter along its side than the diameter of Zloty's inner circle. I'd estimate the die as being 10mm x 10mm, putting it at 100mm^2. Intel's Atom N550's die is 87mm^2, but a 15% increase in die area makes sense given AMD's out-of-order architecture and presumably beefier GPU. AMD typically gives you more transistors than Intel for the same price so this isn't surprising. Update: Industry and enthusiast community veteran, Hans de Vries (I remember reading his architecture posts back in the K8 and P4 days) posted an analysis of the Ontario die plot. He estimates its die at an even small 74mm^2, indicating that TSMC's 40nm process is quite dense. If these numbers hold true that would mean Ontario is not only smaller than Atom, but also much higher performing. Note the amount of die area dedicated to graphics. This is going to be very good for entry level systems.

I'm excited, we desperately need performance competition in the ultra thin/ultra portable notebook market. Now all we need is to get our hands on an Ontario platform and test it.