We’ll start our look at our vendor cards with the Asus ENGTS450 Top, Asus’s top-clocked entry in to our roundup. It’s one of the 3 heavily overclocked cards in our roundup, sporting a 925MHz core clock and a 1GHz (4GHZ effective) memory clock, a 142MHz (18%) and 98MHz (11%) overclock respectively. 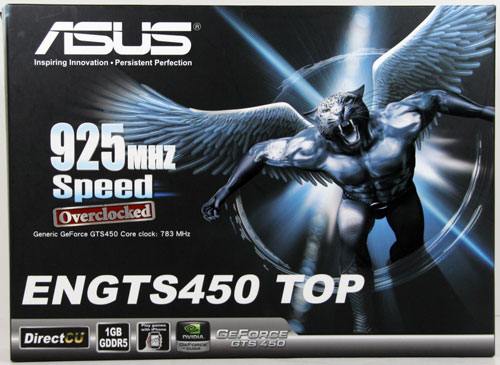 The ENGTS450 Top comes from Asus’s Xtreme Design team and features their usual enhancements: a double-sealed “dust-proof” fan, double overcurrent protection, and as we previously mentioned structural enhancements to keep the PCB from bending. The card is also part of Asus’s Voltage Tweak series, meaning it’s been specifically augmented for overvolting. Compared to the reference GTS 450 Asus is using a different VRM setup with additional phases, which they claim offers superior power delivery. In any case the VRMs they’re using are certainly more capable than the VRMs on the reference cards; while our reference cards max out at 1.162v, the ENGTS450 Top can go to 1.212v. In practice this is likely more voltage than the card can handle with air cooling, so liquid cooling would be a necessity for pushing the card that hard. 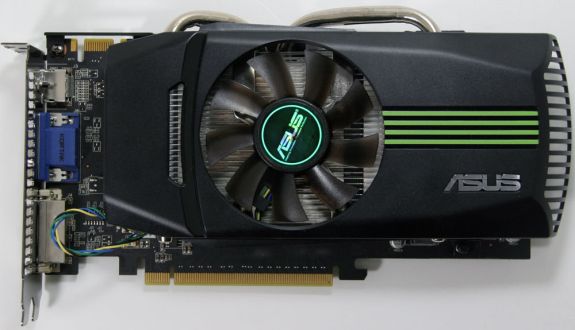 Attached to the card is Asus’s custom dual-heatpipe DirectCU cooler, the same one we saw back in July on their custom GTX 460 card. Asus claims that it’s cooler and quieter than the reference cooler, and while it does do a better job of dissipating heat it’s not as quiet as NVIDIA’s near-silent reference cooler. Meanwhile at 8.25” the PCB is the same length as the GTS 450 reference PCB, but as with the GTX 460 the shroud on Asus’s DirectCU cooler sticks out a bit, making the card over 9” long for all practical purposes. Thankfully with its extra length Asus has moved the PCIe power socket compared to the reference board – on the ENGTS450 Top it’s on the top of the card rather than the rear.

Moving on, in terms of ports the ENGTS450 Top throws us for a bit of a loop. For the rest of the cards in this round you will see 2x DVI ports and a mini-HDMI port (just like NVIDIA’s reference design) but Asus has dropped the 2nd DVI port in favor of a VGA port. Keep in mind that the GTS 450 can only drive two monitors so this does not keep the card from driving a 2nd digital display, but we’re a bit lost on who would be using an analog monitor with a $140 video card. We can only assume this was so Asus could skip out on packing a DVI-to-VGA dongle with the card to save a few pennies.

As for the software side of things, the card comes packaged with Asus’s SmartDoctor and GamerOSD software, which are made necessary by the fact that this is a Voltage Tweak card and hence it needs software to allow tweaking. SmartDoctor and GamerOSD haven’t changed much in the last year, so our thoughts are the same as always: it gets the job done, but otherwise it’s glitch and unintuitive software that’s outclassed by 3rd party utilities. Normally SmartDoctor is the only software that can properly control the VRMs on an Asus card, but in this case MSI’s Afterburner software recognizes the VRMs so we honestly can’t think of a good reason to use SmartDoctor in this case. SmartDoctor is simply outclassed by Afterburner here. 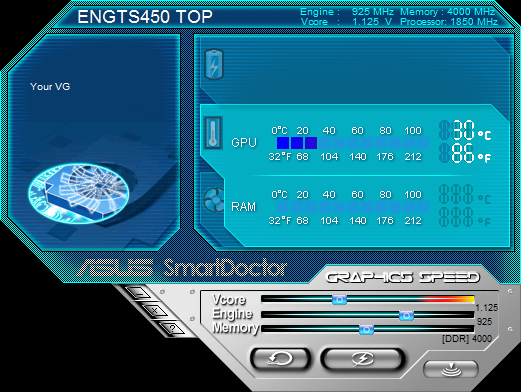 Rounding out the package is the usual quick start guide, a double-molex to PCIe power adaptor, and a driver/utility CD.

Finally, for those of you wondering about the price, Asus has put the MSRP at $139, which means the card commands a $10 premium over a reference GTS 450. Out of all of the overclocked cards in our roundup today, this is actually the cheapest of them.