Our first candidate has been in our labs for more than 6 months now. When we last took a look at the NVIDIA GT 430, it was an underwhelming performer. Have driver updates fixed the issues we had with the card? We are going to put the NVIDIA reference card through the paces and also through our new benchmarking methodology.

From the AMD side, we have 6450 reference card. This is the same card that Ryan took a look at earlier. We didn't cover too many HTPC specific issues in that review (except noting that the deinterlacing performance matched that of the 5570's), and we will correct that aspect in this piece.

AMD also provided us with a Display Port to HDMI adapter so that we could test out HD audio bitstreaming, and it worked without issues.

The second NVIDIA card we have in the list is the recently introduced GT 520. Ryan had again covered the launch, but without a detailed review. NVIDIA provided us with a retail sample of the MSI N520GT.

Rounding up our initial set of candidates is the AMD 6570 retail sample, courtesy Sapphire. 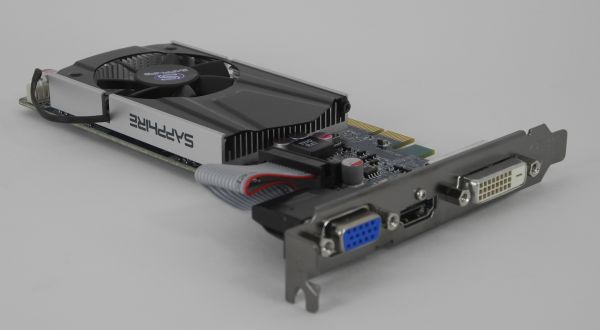 NVIDIA let us know that the GDDR5 based 6450 from AMD was not representative of what is available in the market. There is no passively cooled GDDR5 based 6450, and the core clocks of all the 6450s in the market weigh in at 625 MHz (compared to the reference card's 750 MHz). Keeping this in mind, we also added a DDR3 based MSI 6450 (quite late in the game) to the list of contenders.

The table below compares the listed specifications of all the contenders.


Let us now proceed to take a look at the HTPC testbed in which these cards were benchmarked.