Fixing unintended attenuation is only one part of what’s new however, the other part of the story is faster cellular connectivity for users on WCDMA/UMTS carriers. Users who are using the 4S on CDMA (like Sprint or Verizon) won’t see a performance difference since this is still the same EVDO Rev.A.

The iPhone 4 used an Intel/Infineon X-Gold 618 which supported HSDPA 7.2 and HSUPA 5.76. The MDM6610 inside the 4S supports HSDPA 14.4 and HSUPA 5.76, alongside a number of 3GPP Rel.7 features which are colloquially known as HSPA+. I talked about this extensively in another piece when there was some confusion about whether or not the 4S is HSPA+ - which it is.

The previous X-Gold 618 baseband was a nice improvement over the iPhone 3G/3GS’ X-Gold 608, which lacked HSUPA, but in a world where most WCDMA carriers are at least running HSDPA 14.4, it’s nice to finally have an iPhone with something faster than HSDPA 7.2. I’ve done lots of testing inside my Tucson, AZ market (which is “4G” HSPA+ on AT&T’s coverage viewer) with both the 4 and the 4S, and have built a very good feel for the 4’s performance. As a reminder, if you’re in the USA, those dark blue areas represent HSPA+ coverage areas with AT&T’s upgraded backhaul. In practice these are at least HSDPA 14.4. 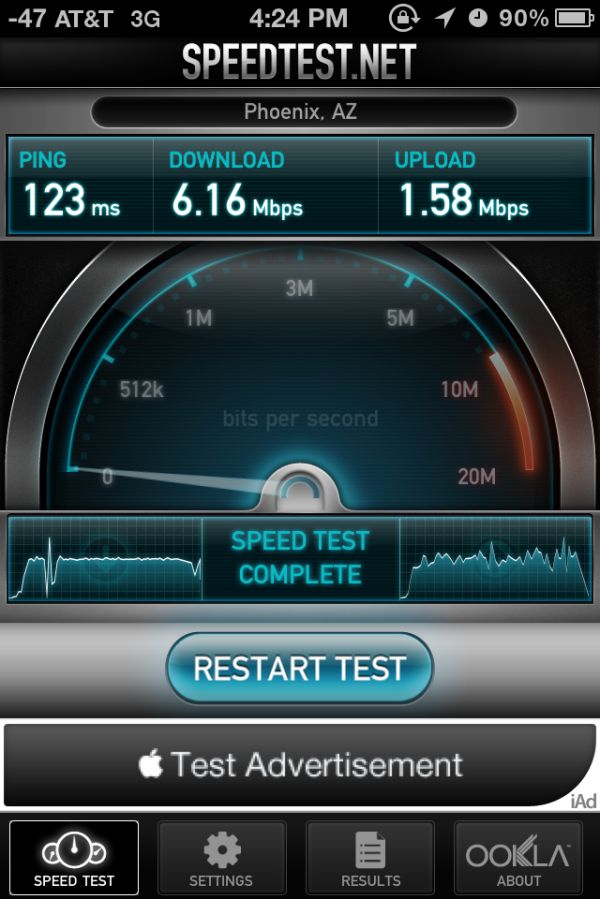 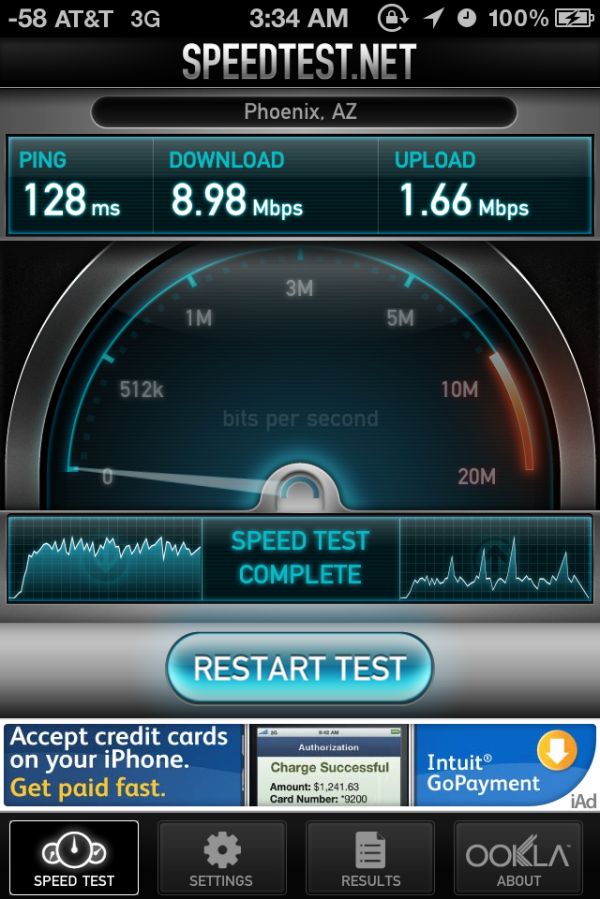 With line of sight to an AT&T NodeB inside my HSPA+ market I’m used to seeing a maximum downstream throughput on the iPhone 4 of almost exactly ~6.1 Mbps, which is about right for the 4’s HSDPA 7.2 maximum when you include overhead. The nice straight line in that result should clue you in that downstream throughput on the 4 was being gated by the baseband. On the 4S, in this same location, I’ve been able to get 9.9 Mbps when the cell isn’t loaded at night (I didn't grab a screenshot of that one, for some reason). It’s nice to finally not be gated by the baseband anymore on an iDevice. Having a faster baseband is part of the reason the 4S’s cellular performance is much better, the other half is receive diversity which helps the 4S push these high throughput rates, and also dramatically improve performance at cell edge.

I did some drive testing with the 4 and 4S side by side and targeted areas that I know have pretty poor signal strength. The 4S is shown in yellow, the 4 in blue. 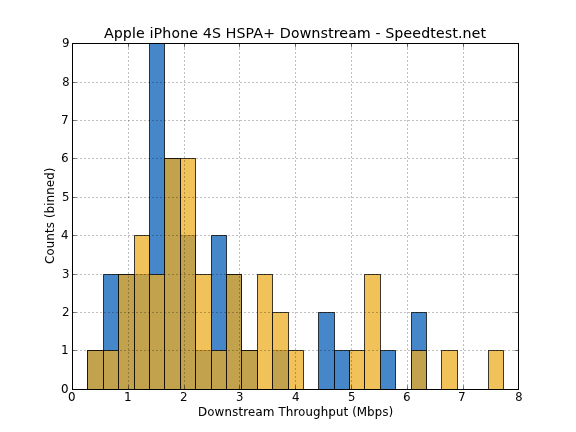 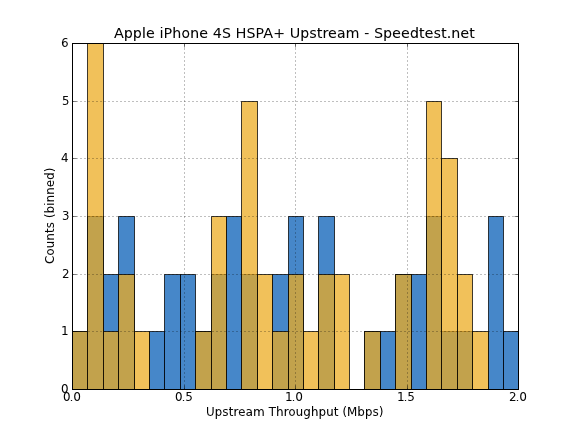 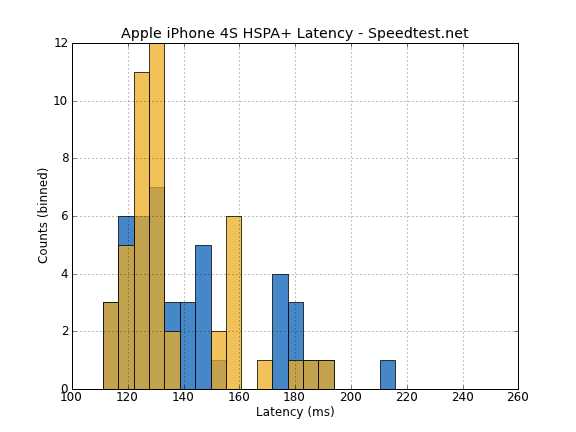 You can see how downstream throughput gets a nice shift up, and the average changes as well, from 2.28 Mbps on the 4 to 2.72 Mbps on the 4S. The maximum in this sample increases from 6.25 to 7.62 Mbps as well. It isn’t a huge shift, but subjectively I’ve noticed the 4S going a lot faster in areas that previously were difficult for the 4.

We’ve also run the usual set of standalone tests on the 4S on AT&T in my market of Tucson, AZ, in Anand’s market of Raleigh, NC, and on Verizon in Raleigh, NC. Though we don’t have a Sprint 4S yet, we hope to do a more serious 4S carrier comparison here in the US when we get one. First up is AT&T which is of course HSPA+ in both of our testing markets. 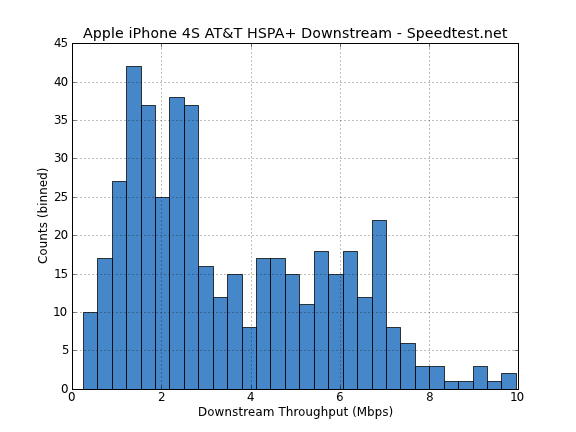 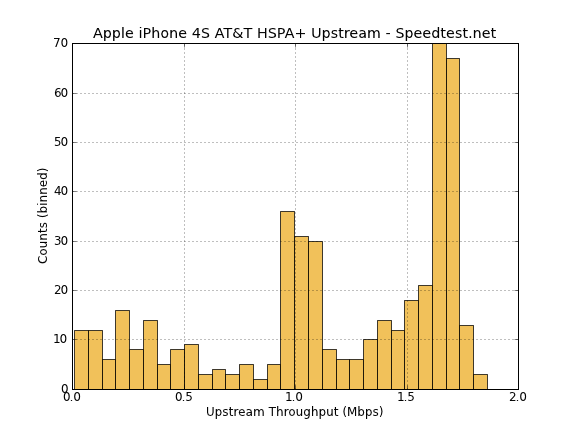 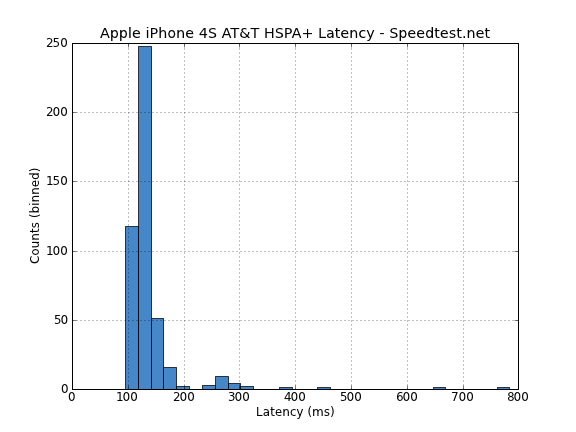 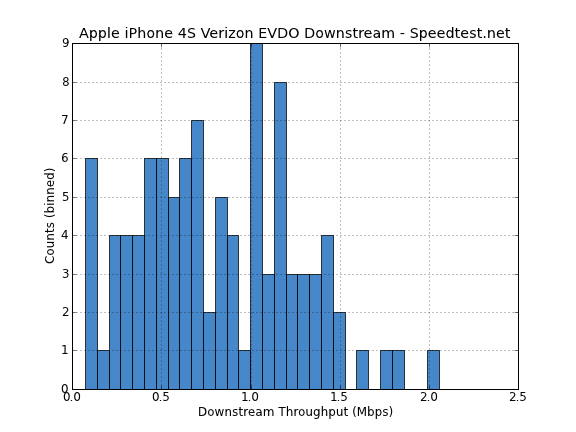 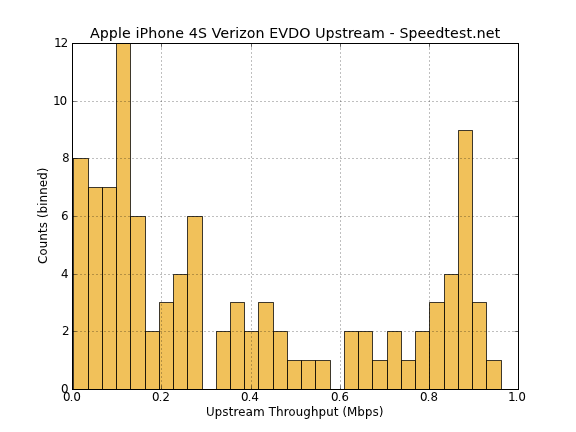 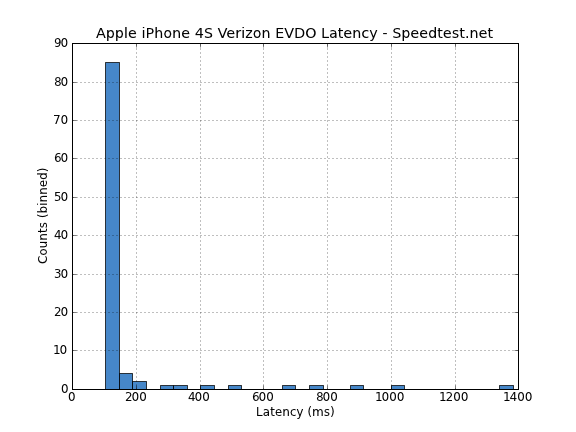 For the CDMA carriers, the 4S shouldn’t (and doesn’t) bring any huge improvement to data throughput because the CDMA 4 had both receive diversity and MDM66x0. For users on GSM/UMTS, however, the 4S does make a difference again thanks to the inclusion of those two new features.

One of the things I noticed was absent on the CDMA iPhone 4 was the 3G toggle. It does indeed make some sense to not include this in a CDMA 1x/EVDO scenario since power draw is about the same between the two air interfaces, however, the absence of this toggle has carried over to the 4S regardless of whether the phone is activated on a CDMA2000 or UMTS/GSM network. That’s right, you can go under Settings -> General -> Network, and there’s no longer any 3G Data toggle which you can disable and fall onto EDGE (2G) with now. 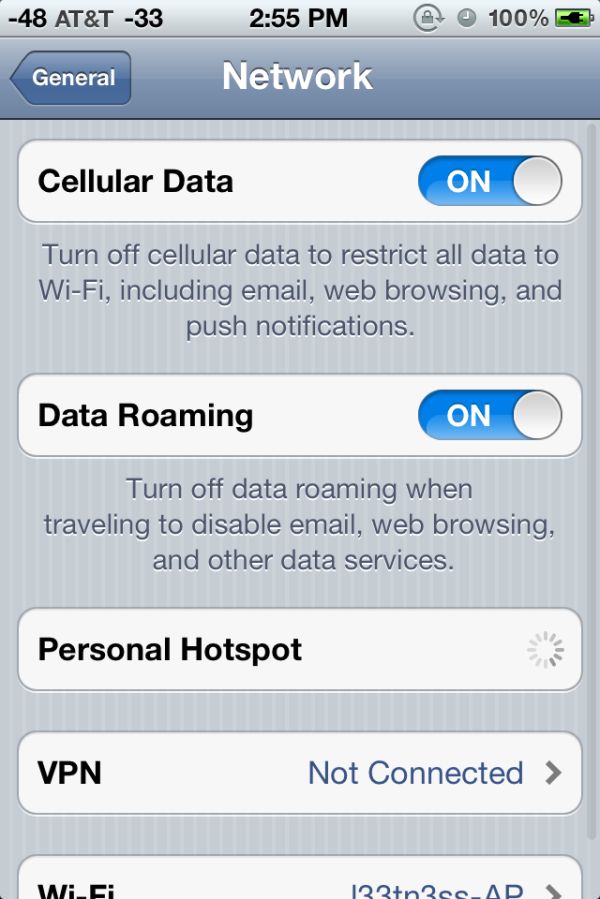 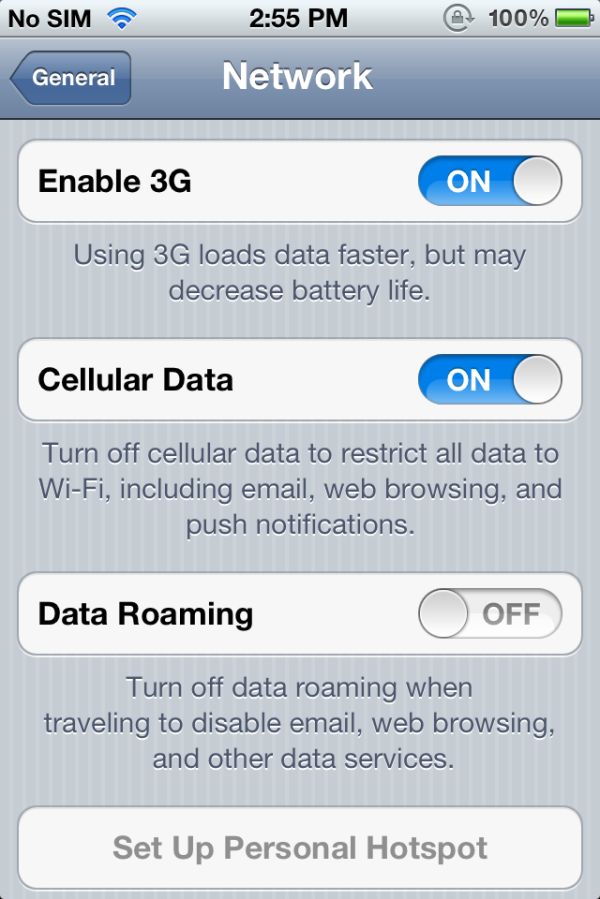 It’s likely that this is absent to accommodate the multi-mode nature of the 4S (and thus the lowest common denominator CDMA mode), however the absence of this toggle makes getting connected in congested areas more difficult. In some markets, (I’m looking at you, AT&T in Las Vegas), EDGE is often the only way to get any connectivity, even without a major convention going on. Not having that 3G toggle makes manually selecting that less-used but more reliable connection impossible now, to say nothing of the potential battery savings that this would afford (and that we sadly can’t test now). 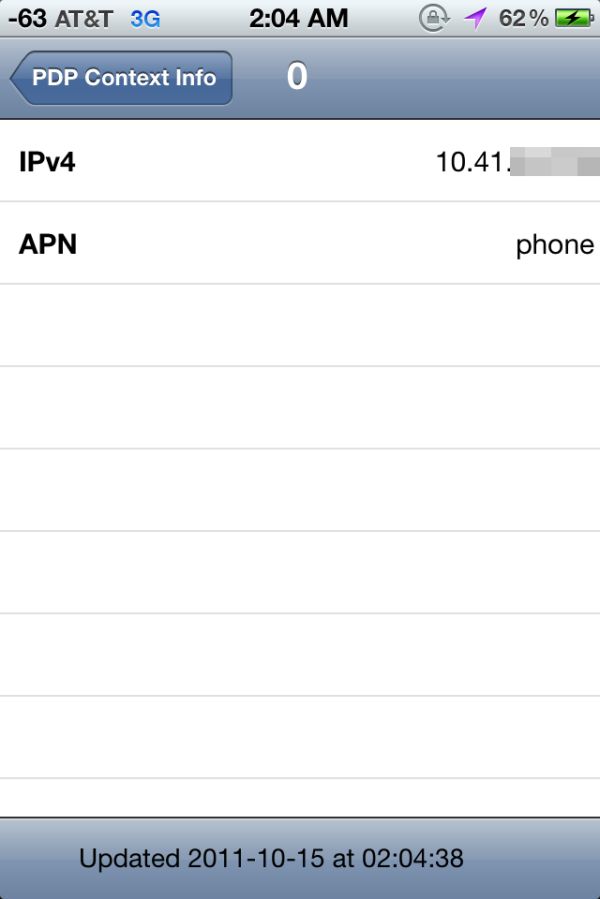 There’s one last tangential question about HSPA+ on the 4S, specifically on AT&T. I’ve left this to the end since it doesn’t impact non-US 4S users, but the last question is whether the 4S is actually on HSPA+. For a while, I was concerned that AT&T would continue using the wap.cingular APN on the 4S which seems shaped to around 7.2 Mbps HSDPA. I’m glad to report that AT&T hasn’t continued using wap.cingular on its 4S data plans, instead using “phone” which is a newer APN that allows for HSPA+ (above 7.2 Mbps) rates. You can check this yourself under PDP Context Info on the 4S in field test.