Obviously the most important thing with this kind of upgrade is seeing just what kind of use time you can get out of a device with a relatively gargantuan 12.5 Whr battery, and for this we turned to our battery life testing suite. I investigated the Bionic’s extended battery back in its own review, and these increases in battery size almost always reflect (unsurprisingly) almost a perfect linear scaling.

When I started this review, the RAZR MAXX was running the original software release just before the 6.12.173 update which we briefly discussed in a pipeline post. This update adds connected discontinuous reception (cDRX) support to the RAZR MAXX’s ‘Wrigley’ LTE baseband, which improves battery life. That said I’m told only markets with Ericsson as the supplier have been updated, and I’m in an Alcatel-Lucent Verizon area. The point is that battery life really can only get better from the numbers below, and if you’re lucky enough to be in one of those markets, you’ll enjoy the benefits with the latest update. In addition, I also discovered that our RAZR review unit was running a weird build of software, 6.11.777, which I’ve since managed to get running 6.12.173 just like the MAXX, though most of these tests reflect the 6.11.777 numbers we initially obtained. If you’ve been watching bench as I’ve added numbers, this is why things sometimes change around until the review posts as I run and re-run tests. While finishing this review I’ve obtained an HTC Rezound and Droid 4 which we’re working on reviewing as well - these battery life results are included in here where available as well.

Anyhow, onto the results. The tests haven’t changed since we’ve talked about them last, and first up is the call test which consists of a call placed between the phone under test and another line, with music played a both ends at medium volume to avoid saturation. 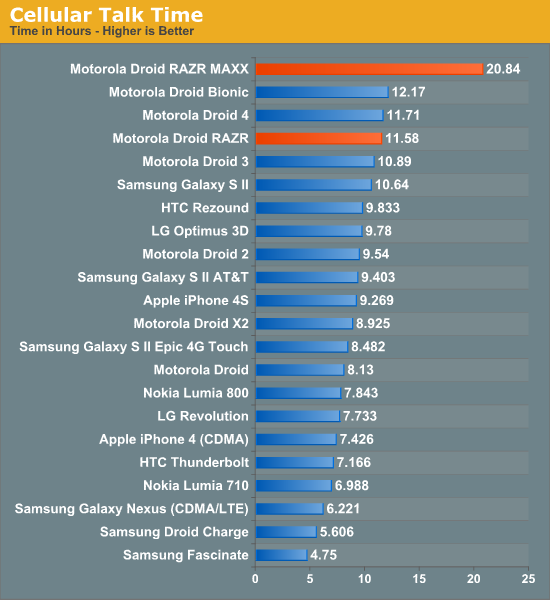 Unsurprisingly we see an almost perfect 1.8x scaling here and get very close to the expected 21 hours of battery life you’d expect. The RAZR MAXX lasts astoundingly long if you’re interested in just voice calls, and Motorola continues to dominate the CDMA2000 1x voice tests. On 4G LTE handsets this is with the phone left in “CDMA/LTE” mode, though the LTE baseband is in RRC_IDLE state and consuming almost no power, while the MDM6600 handles the 1x voice call. As an aside, we’re almost getting to the point where voice battery life is so long that running this test is almost unweildy.

Next up are the web browsing tests, on 3G EVDO, 4G LTE, and WiFi. Here we load through a couple dozen pages with the display set to exactly 200 nits until the phone dies. We’re going to update this pretty soon with some more cache-busting features, but for now it does demonstrate that nice scaling for the most part. 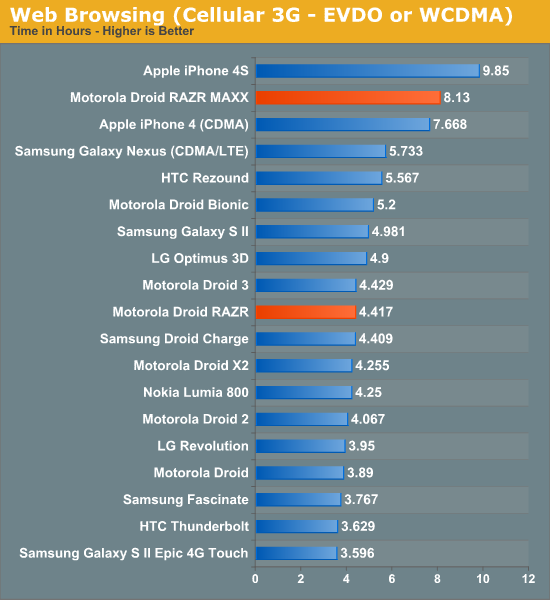 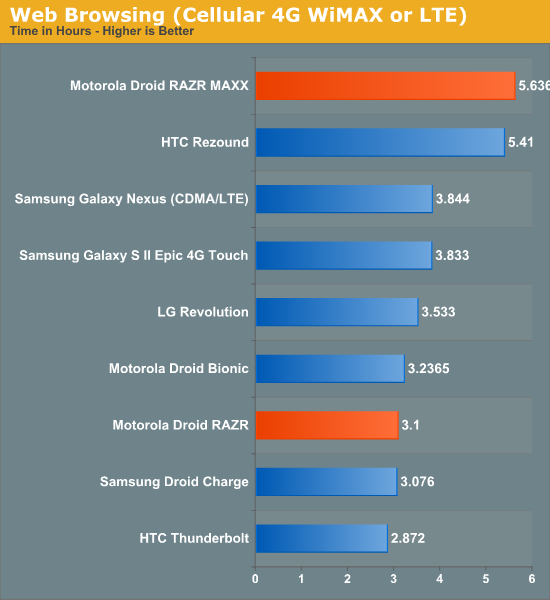 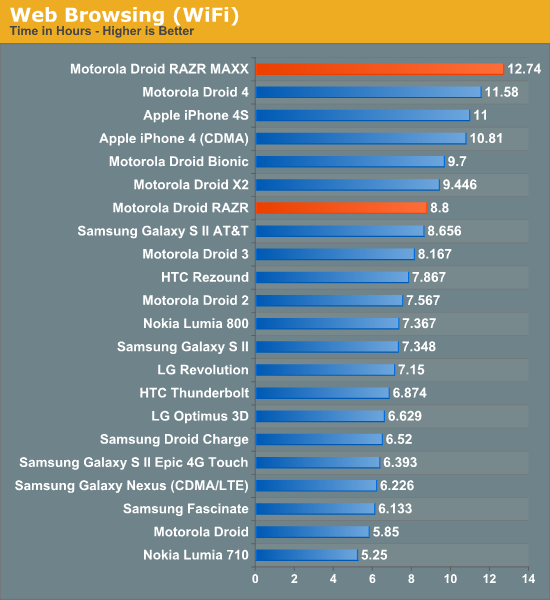 In both the 3G and 4G tests, we see very close to the expected scaling, and the RAZR MAXX easily captures the top spot among Android phones. The only phone close to the RAZR MAXX at basically any point is the HTC Rezound in this test, which surprised me with its LTE battery life. On EVDO the RAZR MAXX is pretty much top dog among the Android crowd, and also good enough to place among the iPhone 4 and 4S. Only in the WiFi web browsing test does the MAXX slip just short of the expected 1.8x scaling, but still posts an impressive result.

Finally we’ve got our hotspot battery life tests, which consist of four tabs of our page tests and a 128 kbps MP3 streaming radio session being loaded on one client laptop and a WPA2 PSK. I had some issues with the hotspot stability on the original RAZR software, and had to resort to running that initial test with WPA2 turned off. I’ve repeated these tests and now have better numbers. 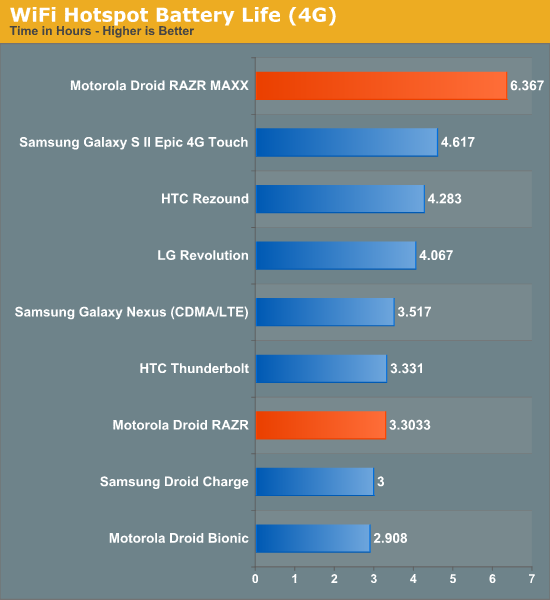 The hotspot test is great since it’s the only place other than the call test where we can isolate out the display (which ends up being by far the dominant factor) and gauge power draw from the combination of SoC, cellular baseband, RF, and WLAN. Here you can see the RAZR MAXX performs as expected and pretty much blows away everything else - other devices like the Rezound might get better battery life with the display on from using LCD (as opposed to AMOLED), but you can’t get around having more watt-hours to draw from.

So what do all these tests translate to in real world day to day use? Well, like anything the answer depends on your workload. If you use the phone as a hotspot while playing GTA III, obviously you’re going to still kill the phone in a few hours. If you’re just using it to occasionally poll twitter, check email, and reply to a few text messages, battery life on the order of two days isn’t hard to imagine. It’s hard to assign a realistic number given just how varied everyone’s use patterns are.

I also tested how long the RAZR MAXX takes to charge fully after being completely, absolutely bone dry empty. On the MAXX that comes to 4.217 hours using the Motorola supplied 750 mA charger, which isn’t bad at all. The MAXX battery capacity isn’t so large that you can’t charge it on a nightstand and expect it to be 100% in the morning. I also timed the normal RAZR which came to just over 3 hours. I expected the MAXX to take much longer to charge, but the reason is no doubt the fact that Li-Ion battery charge curves aren't linear at all.