In and Around the Thermaltake Armor A30

I actually put off testing the A30 for a day because when I'd removed it from the box I was genuinely somewhat mystified by how it was supposed to come apart and back together. A Corsair case this is not, Thermaltake's A30 design is able to fit a decent amount of capacity and cooling into relatively svelte dimensions but somewhere along the line usability took a major backseat. This is not an intuitive case.

The basic aesthetic is undoubtedly going to be the subject of some debate, but I personally don't find it too outlandish. It definitely falls into the gamer-targeted market, but it's primarily an interesting use of angles and ventilated mesh. I actually quite like the way the front looks; the indented angle is stylized without being aggressively gaudy. It's also nice to see an external 3.5" bay, as I get a tremendous amount of mileage out of the card reader I use in my desktop. 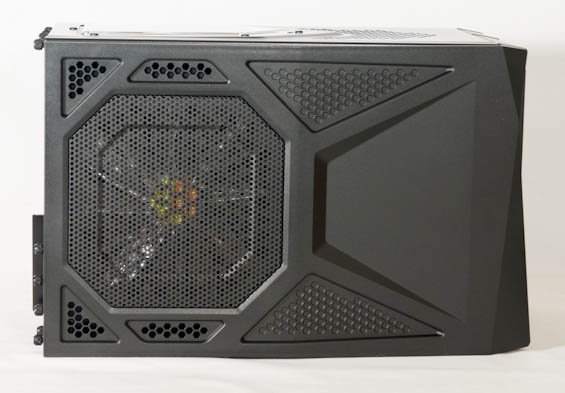 When you get to the top, you'll see the beefy 230mm exhaust fan, and I suspect this monster is the reason why the A30's cooling performance is as strong as it is (you'll see later on). There's healthy ventilation in the top panel, too, as well as the sides in front of the windows. These are actually intriguing places to put vents, and if I had to hazard a guess I'd say they're in exactly the right place to work with the 230mm fan to produce healthy airflow through the case. 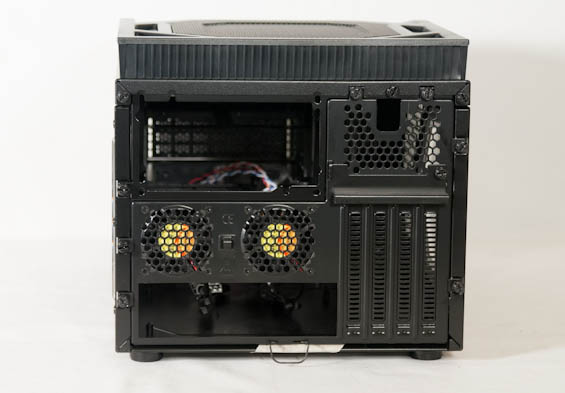 It's the rear of the case that's really the intimidating part, and taking one look at this was enough to make me procrastinate for one night. There are eleven thumbscrews in total back here, with no apparent rhyme or reason to their placement. As it turns out there actually is a reason why the back looks the way it does, and we'll get to that in a second. Another point of concern was the pair of 60mm exhaust fans, though, as small fans tend to produce quite a bit of noise.

Where everything goes haywire is the assembly of the case. Like one of SilverStone's more exotic designs, there's a very specific way the A30 comes apart. Unlike SilverStone's more exotic designs, it doesn't make much sense. The first part that needs to be removed is the entire top panel, fan and all, and that's done by removing three thumbscrews near the top rear of the case. Note that the motherboard tray is also removable, but for the first time in my entire life I'm actually going to call this out as a poor design choice. 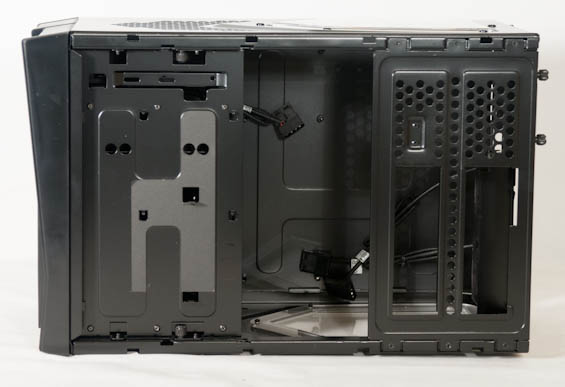 With the top panel off, you get your first glimpse of the interior of the A30, but you'll also notice the external drive cage and power supply cage are both using the side panels as a brace. That leads to the A30's absolute biggest design flaw: the side panels aren't removable. Almost everything but the side panels is removable, but it makes taking the A30 apart needlessly involved. To wit: removing the external drive cage involves two thumbscrews, removing the power supply cage involves three thumbscrews and six regular screws, and removing the motherboard tray involves six thumbscrews (two shared with the power supply cage). The internal 3.5" drive cage beneath the external drive cage is held in place by a single thumbscrew but has to slide into place, and the front fascia of the case uses a series of plastic snaps. And just to seal the deal, there's also a bracket used to cover the mounts for the expansion slots that uses yet another thumbscrew.

For those of you who haven't been keeping score, all of that means getting the A30 ready for assembly involves removing a cumulative twenty screws and separating it into six parts, which is honestly insane. All of the fans use 4-pin molex connectors (and that's it), and while they're designed to be daisy-chained together they also can't take advantage of any of the motherboard's fan headers. Thermaltake's site advertises the chassis as being "fully modular," but really the problem is that there's just too much going on and it's going to play hell with assembly.