In and Around the Lian Li PC-A76X

I mentioned in the introduction that I was feeling very optimistic about the Lian Li PC-A76X. While I have misgivings about aluminum as a construction material (see my review of Cubitek's HPTX Ice), the PC-A76X's cooling design looked to be a big winner, at least on paper. The more cases I review, the more I'm convinced the bottom-front intake to top-back exhaust standard is just not the best way to do things. Lian Li looked like they had a winner on their hands.

Then I opened the box, reality set in, and my thoughts drifted from "this case should perform really well" to "I hope they're not charging as much for this as I think they are." Even just removing it from the box, the case had a bit of a rattle. In its journey here from Taiwan the front door had incurred a minor dent, and you can see from the side that though the top and bottom mostly line up, it's...less than secure. 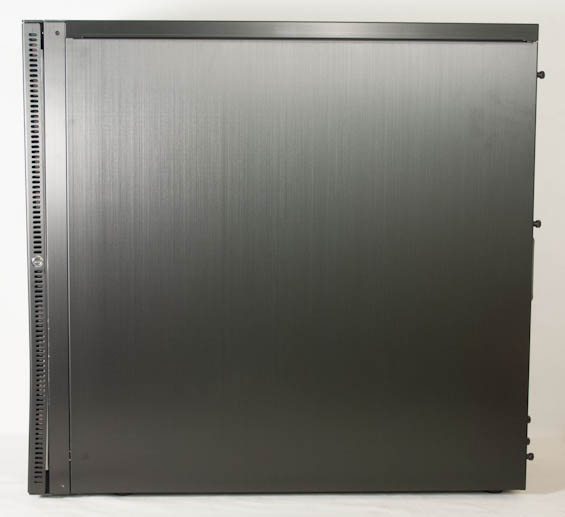 Lian Li uses a traditional black brushed aluminum finish over the entire chassis, and if you're familiar with their other designs there's nothing particularly new here. What struck me once I unlocked and opened the front door was that the PC-A76X reminded me of an aluminum version of one of Fractal Design's cases. The deprecation of external 5.25" drive bays, coupled with the blocked in fan mounts on the top and side panels of the case reminded me of some of the things Fractal Design does, though they're just design tricks that are becoming increasingly common and not unique to that company at this point. 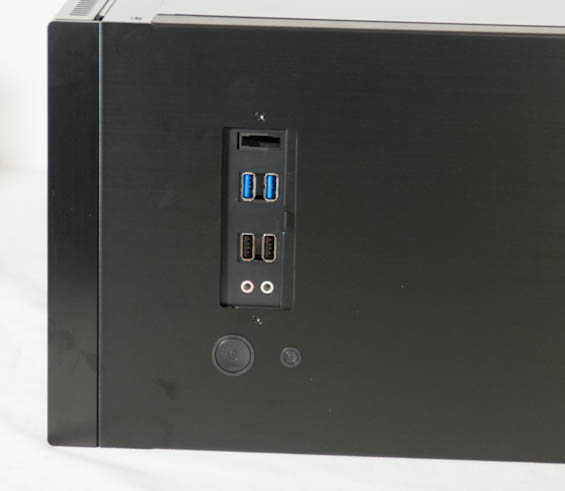 On top of the case is a sliding door that hides the port cluster, but inexplicably there's an opening for what looks like there should've been an eSATA port. The pair of USB 3.0 and 2.0 ports are appreciated, though; I've been of the opinion that four is about the right number of USB ports for the front of a case, and USB 3.0 can still be hinky even on modern boards. 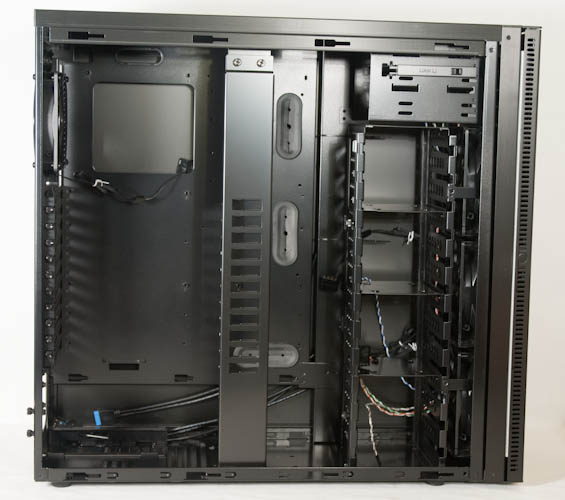 When you do remove the thumbscrews from the back of the case and pop the panels off, you find an interior that's remarkably straightforward. The bigger cases get, the more logical their interiors tend to be, and Lian Li makes the PC-A76X very simple for both new users and for people familiar with their ouevre. There's a removable bracing bar for expansion cards and one single, long drive cage in the front. Note that none of these cages are removable, so even if you don't need space for twelve hard drives, you're unfortunately stuck with that cage blocking some of the front intake. 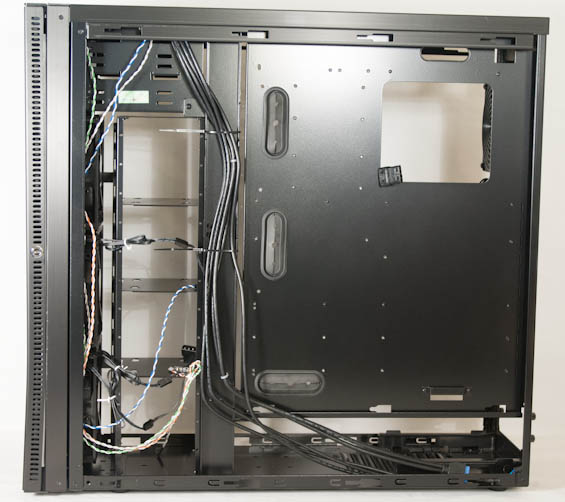 What concerned me was the paucity of mounting holes in the motherboard tray for routing cables. These are conveniences that are par for the course for high end enclosures, yet these three small holes seem frankly inadequate for a case that's designed to hold multiple high end graphics cards and multi-CPU motherboards. That said, the area behind the motherboard tray is surprisingly spacious, and Lian Li has done a fantastic job of routing the case's cable leads and keeping the cabling clean and tidy.

I don't think you're going to hear me accuse the PC-A76X of being a bad design, but Lian Li's overall design language seems to be a bit behind the curve. The rubber-lined routing holes are really spare and strike me as being inadequate for a case with such lofty ambitions, and the inability to remove unneeded drive cages to improve airflow from the intakes would be troublesome at half the price and borders on unforgivable at $210. The aluminum used in the shell itself also seems frankly chintzy, and the minor damage incurred en route from Taiwan despite the healthy padding in the packaging suggests a case that may not be particularly sturdy in the long term.