To hit its $129/$149 price point, ASUS outfitted the MeMO Pad HD7 with a quad-core Cortex A7 based SoC from MediaTek: the MT8125. Before we get to the specifics of this SoC, it's important to put MediaTek in perspective since this is the first time we've ever reviewed one of its SoCs.

In our SoC coverage at AnandTech we tend to focus on the big five: Apple, Intel, NVIDIA, Qualcomm and Samsung. TI dropped out of the AP (Application Processor) space, and ST-E's future as a company is a bit uncertain. The benefit of ARM's business model however is that anyone can put its cores and/or ISA to use. You just need to have enough funding to pay for an ARM license and build an implementation team to get your SoC off the ground. While we're used to low cost markets being addressed by de-featured versions of high-end chips, in the ARM ecosystem there's another solution: the rise of the high-volume, low cost SoC vendor.

MediaTek, a Taiwan based fabless semiconductor manufacturer, is one of a number of ARM licensees that are presently giving Qualcomm (and other mobile SoC vendors) a hard time. They tend to take vanilla ARM (and 3rd party) IP, integrate it, and sell it for much less than the ARM licensees we're used to covering. Just as ARM's licensees are putting incredible pressure on Intel's margins in client computing, MediaTek is doing the same to the bigger ARM licensees.

If you look at any of the sub-$150 Android tablets these days, they all integrate some form of ultra low cost silicon. In large, cost-sensitive markets (e.g. China), MediaTek's presence is extremely high. 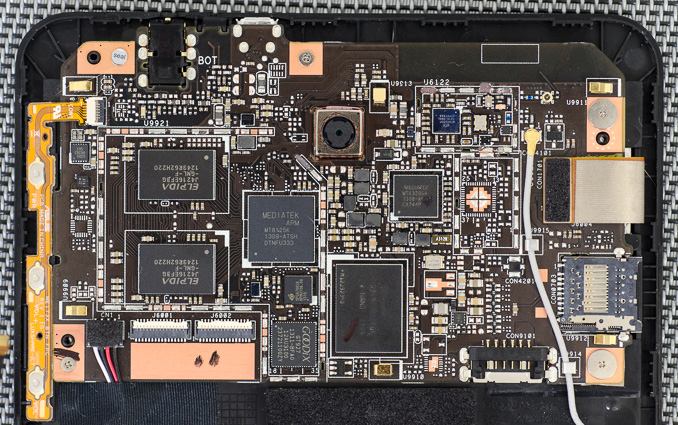 The MT8125 integrates four relatively early revision ARM Cortex A7 cores (r0p2). Each core can run at between 500MHz and 1.2GHz, and each core can be hot-plugged independently. I ran a bunch of low level memory tests and it looks like MediaTek opted for a fairly sensible 32KB/32KB L1 cache configuration (I$/D$). The L2 cache appears to be 1MB in size, shared between all four cores. NEON is supported.

Of the four cores, I noticed the first two are frequently active, with clock speeds usually up at 1.2GHz whenever you're doing anything (loading apps, scrolling, etc…). The third core usually plugs in to keep responsiveness up while doing anything more CPU intensive. The fourth core seems to occasionally get plugged during normal, non-heavily threaded use, but even then for very short periods of time.

We've only briefly discussed ARM's Cortex A7 here, so I'll offer some more details on the architecture since it's relevant. The Cortex A7 is ARM's Cortex A5 successor. It's a light-weight 32-bit core that is fully ISA compatible with the Cortex A15 (which is why we see it used in big.LITTLE configurations with the A15). The A7 is a fully in-order micro-architecture, unlike the OoO Cortex A9 (at least with respect to integer instructions). The A7's integer pipe is 8 stages deep, and has limited dual-issue capabilities (e.g. FP/NEON can't be dual-issued, branches can only be issued from one port, etc…). The execution back end is quite similar to the Cortex A8.

ARM's goal with the Cortex A7 was to deliver similar performance to the Cortex A8, but in a smaller area and at lower power. ARM claims a single Cortex A7 core could be fit into a 0.5mm^2 area on a modern 28nm process. That's roughly 1/6 the area required to implement a single AMD Jaguar core.

Performance in our standard suite of web based tests has the quad-core Cortex A7 MT8125 trading blows with the quad-core Cortex A9 Tegra 3 in the Nexus 7. When the two are similar, they tend to be pretty close, but when there's a lopsided victory it's usually well in favor of the Tegra 3/Nexus 7. That tends to mirror my experience with the MeMO Pad HD7. In many cases it feels close to the 2012 Nexus 7's performance, but there's an element of snappiness that's just not present. Some Android animations are a little choppier (e.g. bringing up the apps grid) compared to the Nexus 7. I do wonder how good MediaTek's memory controller implementation is. Remember that ARM only has to provide the CPU IP, the rest of the SoC is up to the designer to build/source. 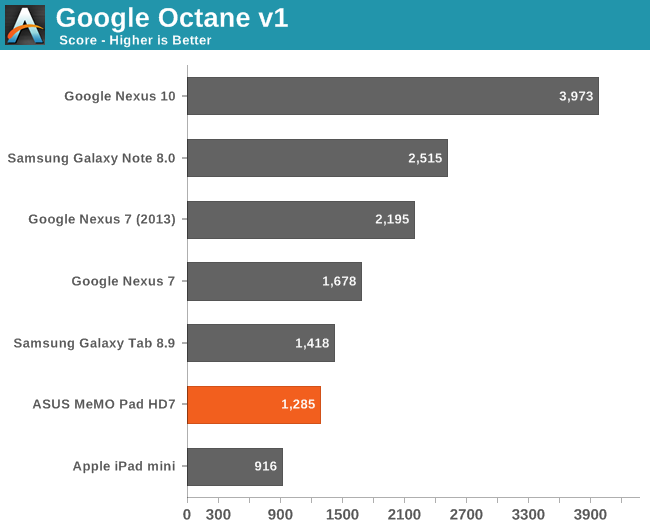 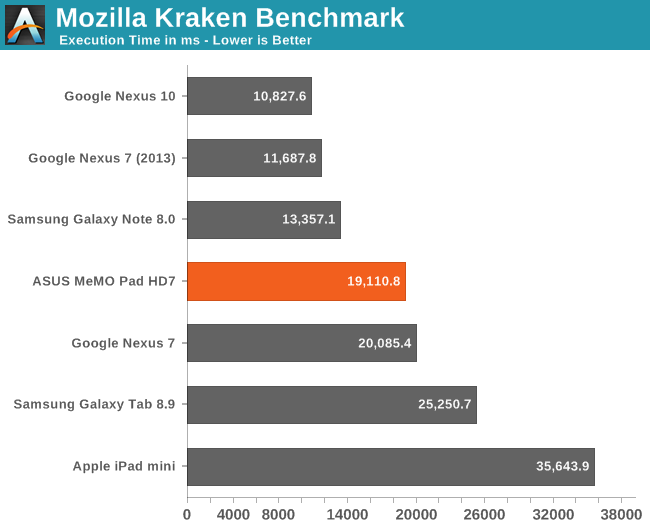 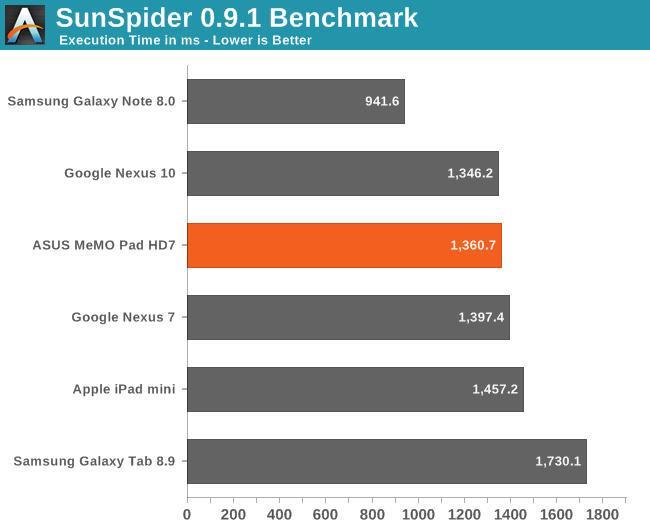