Alienware has gone back and radically redesigned the chassis of their entire mobile lineup, and it's a difference you can see and feel. Their motif was to capture the difference between the 90s idea of alien technology which informed the previous designs and the modern pop culture idea of alien technology, and amusingly I do think they've found it. The base of the new 17 is bevelled and extends up and out, and illuminated lines ring it.

The lid and much of the shell is now aluminum; there's color-configurable illumination of the Alienware logo and two slits in the panel, as well as an aluminum trim surrounding the body of the notebook. Open it up and the interior is still the same soft touch black plastic we're used to from Alienware. 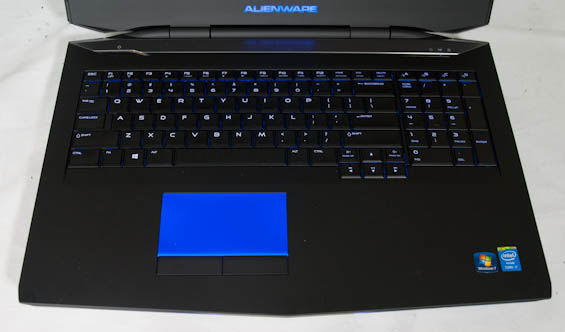 Gone is the group of shortcut buttons above the keyboard, with media controls now shifted to Fn key combinations. The keycaps and keyboard layout are also changed; the caps are a bit more subtle and still very comfortable, but the keyboard layout is a step back, I think. The document navigation keys have been moved (but are still dedicated, thankfully), replaced with a row of four configurable keys above the number pad. I feel like the essential problem with this placement is that it's not something you even see on desktop gaming keyboards; the old and more traditional layout was, I think, superior.

The new touchpad surface is comfortable and we still have dedicated buttons, but I'm not keen on having the touchpad itself backlit. Alienware went through the trouble of having the backlighting in the keyboard become less obtrusive, so why undermine that decision with a big fat backlit rectangle? It only lights up when you touch it, and it can be disabled entirely (along with all of the configurable lighting as is traditional), but it seems like a waste in the first place. The highlighted touchpad trim on the old chassis was more attractive and more sensible. 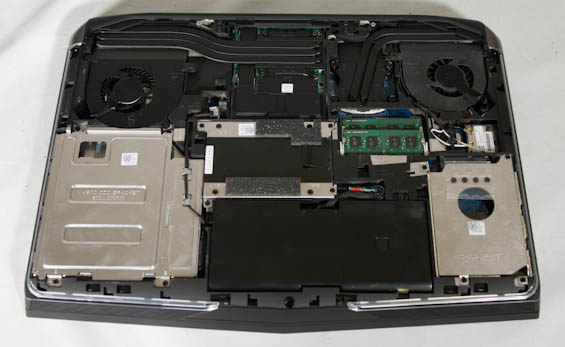 The interior of the Alienware 17 remains as sensible as ever, though. The battery is no longer easily user-replaceable, but notebooks like this one seldom spend much time off the mains in the first place. We still get a dual fan cooling system that isolates the CPU and GPU from one another. Honestly, this internal design remains relatively easy to service and upgrade independently, but remember that Dell/Alienware has a bad history of generationally updating BIOSes. There's no reason why the M17x R3 can't use a 680M or 780M, for example, or even an Ivy Bridge CPU, but a lack of BIOS updates made all but the 680M impossible, and that chip requires modified drivers.

Ultimately I'm fond of the Alienware 17 redesign, especially the switch from a glossy display to matte, but I feel like there's still a void in the market where a sleeker, more sophisticated and frankly adult design could exist. Razer is halfway there, but by being unwilling to produce a thicker machine, they're prevented from using the highest end mobile hardware. This redesign is fine and arguably an upgrade from the old chassis, but there's honestly a lot of room for improvement. Alienware really needs to find the happy medium between form and function.