As we alluded to at the start of this review, the launch of the 290 series has put both AMD and NVIDIA in a state of rapid response. NVIDIA has needed to make adjustments in response to AMD’s new products, and in turn AMD has needed to make adjustments to their own products to take into account NVIDIA’s adjustments. In a more typical launch cycle this process may be more spread out – and in most cases, all adjustments will happen before the first new video card is even launched – but like AMD’s launch schedule itself all of these adjustments have become compressed.

This is no more evident across AMD’s product lineup than it is for the Radeon R9 290, which even by video card launch standards received a very late specification adjustment. Review samples started arriving on Friday, October 25th (the day after the 290X launch) with a planned launch date of Thursday the 31st, only for AMD to push back the launch late on Monday the 28th, doing so just 48 hours before the 290 was meant to be launched. Pushing back the launch, with hardware already in our hands and many benchmarks already complete, AMD issued a new launch date of today (November 5th) and alongside it changed their competitive positioning, giving the 290 a specification adjustment in the process.

The end result is this: while the 290 was originally slated to go up against the $400 GTX 770, in response to NVIDIA’s price cuts AMD decided to make a run at the newly repriced $500 GTX 780 instead. To do so and to be able to meaningfully challenge the GTX 780, AMD would have to make the 290 faster than its original configuration, which in turn necessitated the specification change. As a result this has been one of the wildest video card launches in some time, easily rivaling the launch of the Radeon HD 4870.

So what’s changed between the original 290 and the new 290 as we know it? With 290 hardware already in the hands of reviewers and being shipped out to retailers for the original launch date, it’s already too late for AMD to change the clockspeeds or CU configurations; all of that was validated and burnt into GPUs and BIOSes long ago. Never mind the fact that AMD has already binned these chips for the existing 290 clockspeeds and voltages, so higher clockspeeds would require a new binning and reduce yields in the process. As a result what hasn’t changed are the formal clockspeeds; 290 was and remains a 947MHz boost clock product with 40 active CUs and 4GB of 5GHz GDDR5.

What has changed is the default fan speed. As you might recall from our 290X review, the 290X can’t actually sustain its 1000MHz boost clock at its default fan limit of 40%. The amount of heat generated at those clockspeeds and voltages is just too great for the cooler, and as a result the card has to pull back, significantly at times, in order to keep itself within tolerances with the amount of cooling provided at a 40% fan speed. Like the 290X, the 290 as originally specified would also have a default fan speed of 40%, and like the 290X it too would throttle under just about all sustained workloads. Or as AMD likes to put it, the 40% fan speed on the original 290 would have left “untapped performance headroom.”

So for the new 290 as will be reviewed and shipping, AMD has turned up the default fan speed from 40% to 47%, essentially making uber mode the default mode on the 290. Consequently with improved cooling performance the 290 throttles less (if at all), thereby improving its performance despite the other specifications technically remaining the same. Or to put this another way, AMD was able to significantly increase their performance merely by turning up the fan speed and reducing the thermal throttling that was holding back the card’s performance.

Of course there are some very clear, very important tradeoffs for doing this. As this is the same cooler that was on the 290X, the acoustic profile on the 290 is identical to the 290X. That means that at the original 40% default the amount of noise coming from the card is just north of 53dB, a level that’s louder than NVIDIA’s competing cards and just on the edge of reasonable noise levels overall. Going above 40% further improves the cooling performance of the card, but it moves the noise levels into “unreasonable” territory, with the increase to 47% causing an equally significant increase in noise.

To give you an idea of both the performance improvement and the noise increase from AMD’s last minute specification change, we’ve run a selection of our games at 2560x1440 both on the originally specified 290, and the 290 with its new shipping specification. 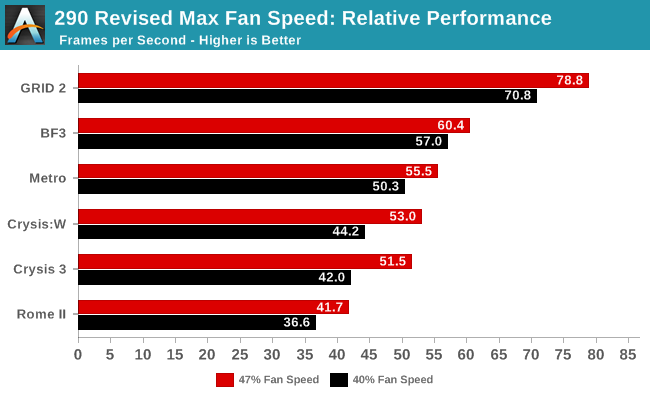 AMD’s fan speed adjustment had a significant impact on gaming performance. At 47% the fan speed on the 290 is now fast enough – and just so – to eliminate thermal throttling on the card under any gaming workload. As a result sustained clockspeeds that were anywhere between 870MHz and 662MHz (the base clock) have become 947MHz across the board. Consequently the overall performance increase from doing this is 14%, which is larger than the performance gap between some cards. At 40% the 290 was getting throttled so badly that just by increasing the fan speed AMD was able to essentially reinvent the 290 as a higher performance SKU without changing the hardware.

But the acoustic costs are equally significant.

We’ll have a full breakdown of the matter later on in our article, but briefly the acoustic cost of increasing the 290’s fan speed from 40% to 47% is a 4dB rise in noise. 290X was just shy of being 6dB louder than GTX 780, and with 290 that gap is now just shy of 10dB, twice the loudness on a perceptual basis. It’s very much a pyrrhic victory for AMD; 290 is now an incredibly fast card for the price, but the noise levels are unreasonable and border on the absurd.

On a final note on the matter, how AMD is distributing the revised fan speed specification is also a little different than anything we’ve seen them do before. With it being too late to reprogram the first wave of cards – remember, at this point they’re already boxed up for retailers – AMD has programmed the change into their drivers instead. So for the 290 with Catalyst 13.11 Beta v8 and later, AMD will override the BIOS default of 40% and put it at 47%, making this the rumored "AMD performance driver" that some have been expecing to be released alongside the 290. Meanwhile the next wave of cards will presumably come pre-programmed with the new 47% specification.

Having gone over AMD’s last minute 290 revision, let’s briefly go over the hardware itself. Since the 290 is based on the exact same reference design as last month’s 290X, the hardware is identical with the exception of the changes in the GPU configuration and the aforementioned fan speed changes. As such, compared to the 290X there are no changes on a physical basis.

Starting as always from the top, the 290 measures in at 10.95”. The PCB itself is a bit shorter at 10.5”, but like the 7970 the metal frame/baseplate that is affixed to the board adds a bit of length to the complete card. Meanwhile AMD’s shroud sports a new design, one which is shared across the 200 series. Functionally it’s identical to the 7900 series, being made of similar material and ventilating in the same manner.

Pulling off the top of the shroud, we can see in full detail AMD’s cooling assembling, including the heatsink, radial fan, and the metal baseplate. AMD is still using a covered aluminum block heatsink designed specifically for use in blower designs, which runs most of the length of the card between the fan and PCIe bracket. Connecting the heatsink to the GPU is an equally large vapor chamber cooler, which is in turn mounted to the GPU using AMD’s screen printed, high performance phase change TIM. The radial fan providing airflow is the same 75mm diameter fan we’ve seen in earlier AMD designs, and consequently the total heat capacity of this cooler will be similar, but not identical to earlier designs. With AMD running the 290 at a hotter 95C versus the 80C average of the 7900 series, this same cooler is actually able to move more heat despite being otherwise no more advanced.

Meanwhile for power delivery AMD is using a traditional 5+1 power phase setup, with power delivery being driven by their newly acquired IR 3567B controller. This will be plenty to drive the card at stock, but hardcore overclockers looking to attach the card to water or other exotic cooling will likely want to wait for something with a more robust power delivery system. As for memory, despite the 5GHz memory clockspeed for the 290, AMD has actually equipped the card with everyone’s favorite 6GHZ Hynix R0C modules. 16 of these modules are located around the GPU on the front side of the PCB, with thermal pads connecting them to the metal baseplate for cooling.

As for display connectivity, the 290 utilizes AMD’s new reference design of 2x DL-DVI-D, 1x HDMI, and 1x DisplayPort. Compared to the 7900 series AMD has dropped the two Mini DisplayPorts for a single full-size DisplayPort, and brought back the second DVI port. Note that unlike some of AMD’s more recent cards these are both physically and electrically DL-DVI ports, so the card can drive 2 DL-DVI monitors out of the box; the second DL-DVI port isn’t just for show. But as a compromise of this design – specifically, making the second DVI port full DL-DVI – AMD had to give up the second DisplayPort, which is why the full sized DisplayPort is back.

Moving on, AMD’s dual BIOS functionality is back once more, but unlike the 290X the second BIOS will not be serving any defined purpose. Both BIOSes are identical as AMD doesn’t have an uber mode for the 290, so switching between the two will not change the card’s performance in any way. In this setup the second BIOS is reduced to serving as a safety net for end-user BIOS flashing.

Finally, let’s wrap things up by talking about miscellaneous power and data connectors. With AMD having gone with bridgeless (XDMA) Crossfire for the 290 series, the Crossfire connectors that have adorned high-end AMD cards for years are now gone. Other than the BIOS switch, the only thing you will find at the top of the card are the traditional PCIe power sockets. AMD is using the traditional 6pin + 8pin setup here, and not the 6pin + 6pin setup seen in the first pictures of the card. Thse sockets when combined with the PCIe slot power are good for delivering 300W to the card, which is what we estimate to be the card’s TDP limit. Consequently overclocking boards are all but sure to go the 8pin + 8pin route once those eventually arrive.