New Zealand called looking for their rugby team. Serisouly though, the all-black interior of the Nanoxia Deep Silence 6 is nothing if not roomy, with its non-removable motherboard tray being capable of holding up to HPTX form factor motherboards. A standard ATX motherboard looks almost misplaced in the Deep Silence 6 (see below). Of course, even smaller motherboards may be installed, including a Mini-ITX motherboard, but that would appear quite ridiculous, as it would be about the same size as the opening the motherboard tray has for the installation of CPU coolers. The tray has two such openings, for dual CPU motherboards; it makes things look a bit off if you're using a common ATX motherboard instead of a dual-socket board, however, but once the sides to the case are on it doesn't stick out quite as much. 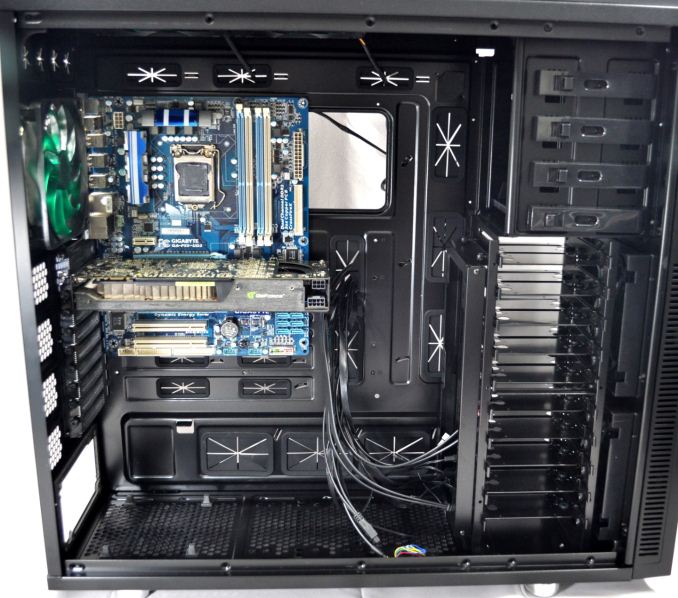 Power supply units of virtually any length can be installed in the Deep Silence 6, as the compartment is very large and unobstructed by other parts. A very long power supply would only prevent the user from installing optional bottom cooling fans or potentially a liquid-cooling radiator. The power supply is placed on simple rubber standoffs and vibration-isolating foam padding sits between it and the rear of the case. 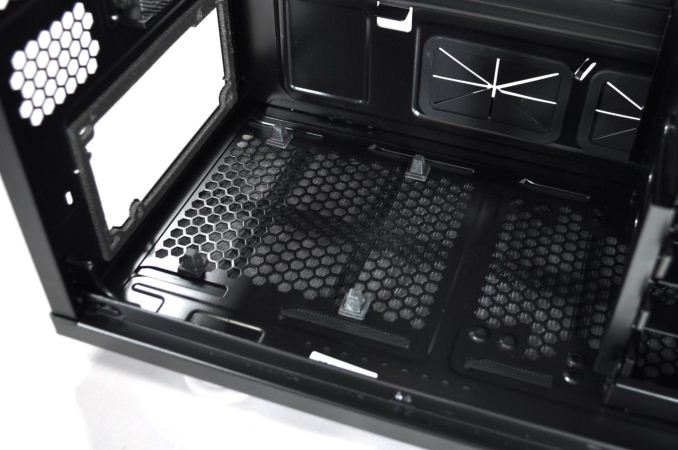 When it comes to storage devices, the DS6 can house a lot of drive. I has  13 slots for 2.5"/3.5" drives and four slots for 5.25" devices, so if you want to run a bunch of drives the Deep Silence 6 doesn't disappoint. Each internal 2.5"/3.5" drive has its own metallic tray. Rubber standoffs also isolate the 3.5" drives from the tray and can be installed into two different positions, adjusting the position of the drive about 1.5 cm backwards and thus allowing the user to install the drives with the connectors facing either side of the case. The 2.5" drives do not receive such special treatment and they are in direct contact with the tray.

Although it is not really a special feature nowadays, Nanoxia has installed plastic latches on the four 5.25" bays that lock the devices in place. The Deep Silence 6 also has a 5.25" to 3.5" adapter included, in order to use an external 3.5" device if necessary.

A long metal bracket can be seen installed on the inside of the large HDD bay; this is one of the most prominent features of the Deep Silence 6, a bracket that allows the installation of a liquid-cooling radiator near the front of the case -- up to two 140x140mm radiators will potentially fit, or you could use a single 140x280mm radiator. Although it is not a ground-breaking innovation, this is a helpful feature, especially for those who may want to install two liquid cooling systems in the Deep Silence 6 (e.g. dual CPU motherboard users) or for installing a liquid cooler on a high-end GFX card. However, it would be a terribly bad idea to mount a radiator at the top of the case and then close the "chimney", especially with the radiator's fan connected to the switch. 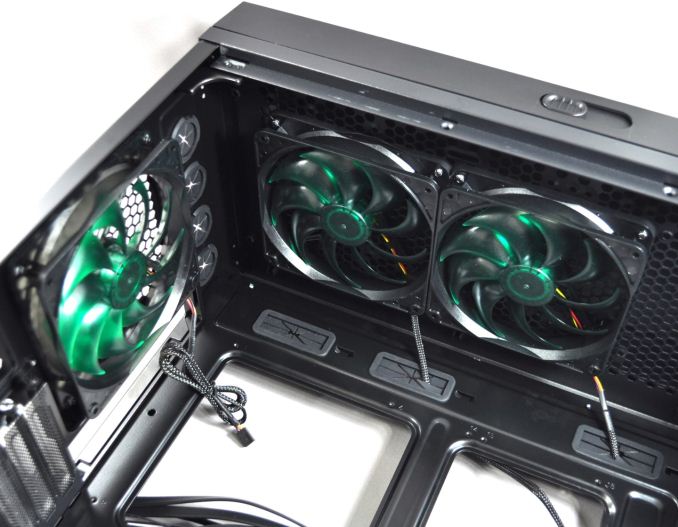 Aside from the two 140mm intake fans at the front panel of the case, the Deep Silence 6 also has three 140mm exhaust fans installed from the factory, two on the top panel and one on the rear side of the case. It is noteworthy that the two 140mm fans on the top panel spin a little faster, with a maximum speed of 1400 RPM, while the other three fans have a top speed of 1100 RPM. 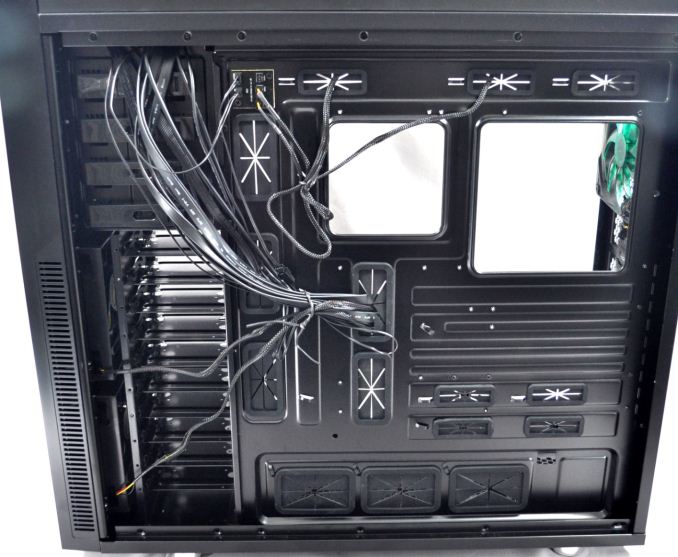 The other side of the motherboard tray is quite spacious as well, with a clearance of nearly two centimeters allowing for a very thorough cabling job. The length of the case requires some very long cables, which is why Nanoxia supplies extensions for the ATX and CPU power cables. A small PCB holds the connectors for the fans to be controlled by the front panel fan controller, with two connectors occupied by the two preinstalled top panel fans leaving a single third connector free.