It's true the iBuyPower Battalion M1771 (MSI GS70) cribs from Razer's playbook (in turn cribbing very liberally from Apple's), but it's also a smart choice on MSI's part. Even if you're not among the Apple devoted (and happily I'm not), it's difficult to find too much fault with Apple's industrial design on their notebooks. Lifting that, painting it black, and sticking it on a gaming notebook is a pretty solid plan, all things considered.

The GS70's chassis is all black brushed aluminum, and it's a fairly smart and sleek design. MSI says it's styled like a stealth fighter; however they want to qualify it, it's in the right direction. It's also actually ever so slightly smaller in every dimension than the Razer Blade Pro, and lighter too. This is no mean feat; Razer's engineering on the 2013 Blade Pro is pretty impressive in its own right. Given the near identical specs between the GS70 and the current Blade Pro, it's not hard to imagine this notebook as a torpedo aimed squarely at Razer. 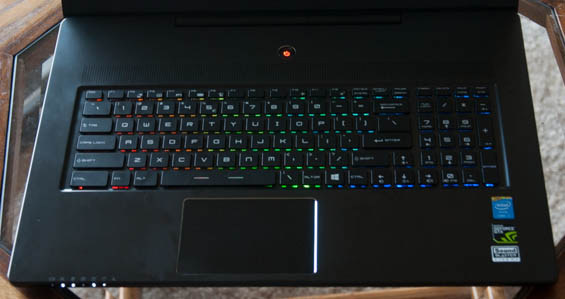 Where the bag mixes is the keyboard and touchpad. The keyboard features subdued user-configurable RGB backlighting and has decent enough response if a little mushy and with poor travel (par for the course in a notebook this thin); while I don't like that MSI is continuing to use exactly the same chassis for international and North American notebooks and thus has a slightly awkward and fouled up keyboard layout, it's at least livable. I just wish they'd do a better job adapting the layout, since that's something that can be handled in software. Having Home and End shared with Page Up and Page Down is frustrating for people who do a lot of writing, especially when we have literally no use for Scroll Lock or Pause/Break.

The clickpad, while attractive with its silver aluminum trim, is nigh unusable. Response and traction are poor. This is something that could have and should have been a homerun; the Switchblade UI is a decent amount of the cost of the Razer Blade Pro and its placement on that notebook is awkward. If you're not a fan of it and wanted a more traditional keyboard and touchpad with a physical 10-key, MSI could've nailed it, but the poor quality touchpad could be enough to drive you back into the Switchblade's arms. 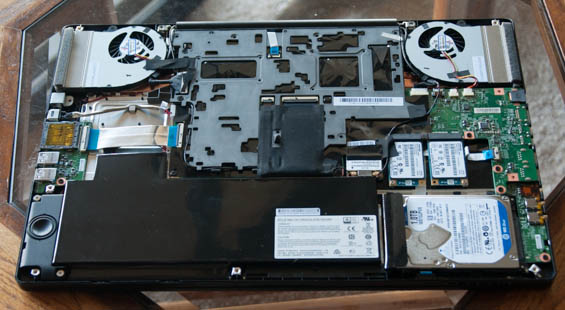 While MSI and iBuyPower don't expect you to crack open the GS70, it can be done with a modicum of patience. There are 17 screws on the bottom of the GS70 that have to be removed before you can take off the shell. You get a good idea of the smart internal layout, though; the fans intake air from the bottom and exhaust it out of the sides, cooling the GPU and CPU separately, and it's actually remarkably quiet given the dimensions of the notebook. MSI also makes effective use of internal real estate; by having moved the keyboard down slightly they placed all of the hotter components above it where they can get a little bit more headroom. The battery and 2.5" bay then live in the wrist rest, keeping it cool.