The MSI graphical BIOS has been a continual evolution for a couple of generations. Initially it started with putting games in the BIOS, and then moved to a sleeker display. While MSI was giving us a good amount of information, there were still a number of tweaks to be made. Users were not able to determine which part of the BIOS they were in from a screenshot, and there was no immediate help screen. Compiled on this, the overclocking options were a hodge-podge jumble with no structured order. I am glad to say that MSI has listened to its customers (or reviewers), and several of these adjustments have been made. I will point them out as we go through.

The first screen shown is the Main screen, with the persistent information bar along the top. This tells us lots of important info no matter where we are in the BIOS – the motherboard name, the motherboard BIOS version, the CPU installed, the speed of the CPU, the DRAM size and speed and the CPU temperature. This is about 85% of what I would like – something alongside CPU voltage and fan speeds might also be worthwhile. 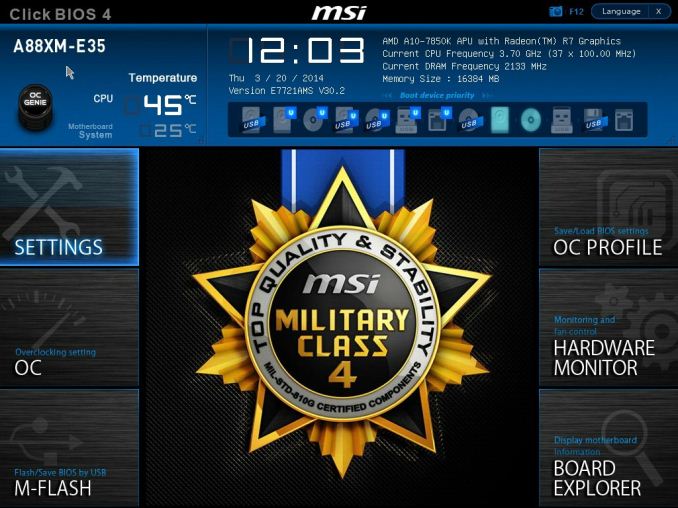 MSI’s BIOS philosophy is to keep the tabs on the main screen constant and offer the change to different options in the middle. This is different to almost every other motherboard manufacturer – most tend to change most of the screen with every different tab.

Moving into the Settings tab gives most of the advanced options not related to overclocking. In this tab we see the right hand side change to a help menu, and as we move through the advanced menus, the central screen shows the location of where we are in the BIOS. I have wanted this change for over a year, so I am rather glad to see it! 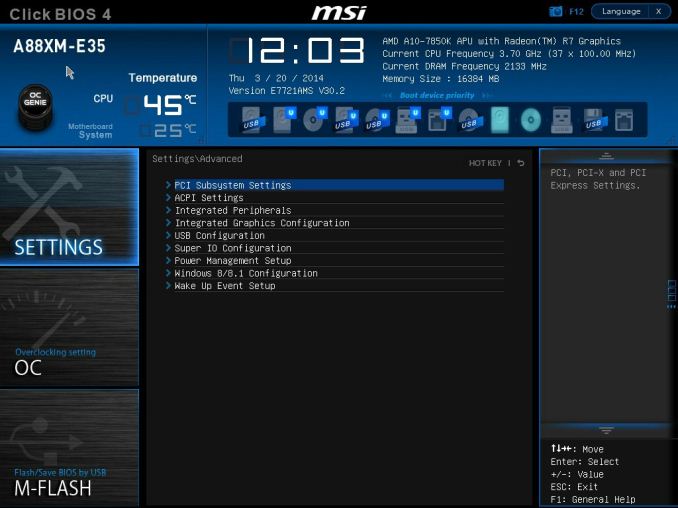 The Advanced option in the Settings tab brings up the regular array of peripheral submenus as well as fast boot options for Windows 8 users. Users needing to change the LPT or COM settings will need to look in the Super IO Configuration menu, and storage settings should navigate to the Integrated Peripherals. 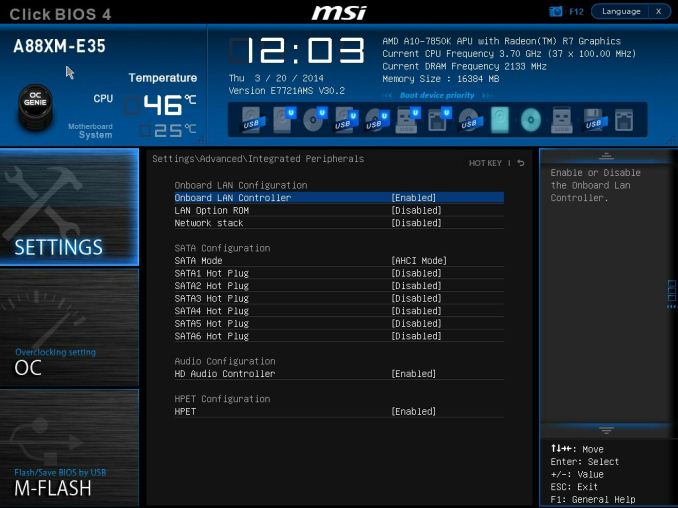 The overclocking menu is still is a mélange of options with a general order but nothing concrete to help users navigate better. It starts with the CPU options, followed by the memory and power adjustments. 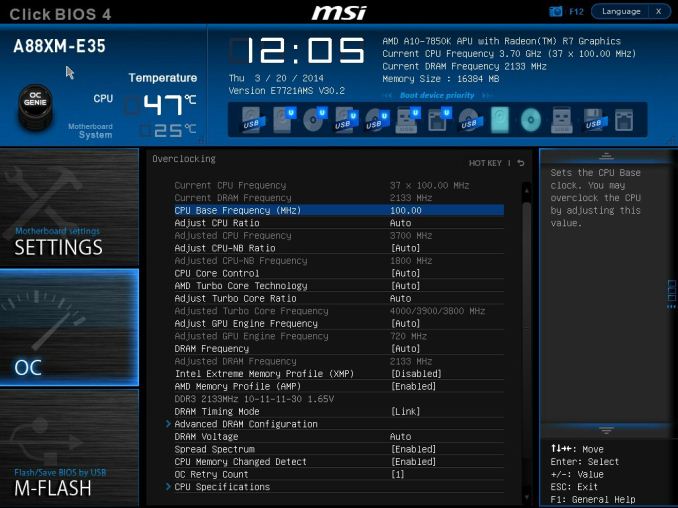 One point users might immediately notice is the lack of voltage controls. MSI has decided to remove them from this motherboard. Given the nature of the motherboard (limited power delivery, price point) we could understand that MSI wants this motherboard to not be the focus of any overclocking performance testing. Nevertheless, users can adjust clock speeds, IGP frequencies and DRAM settings. 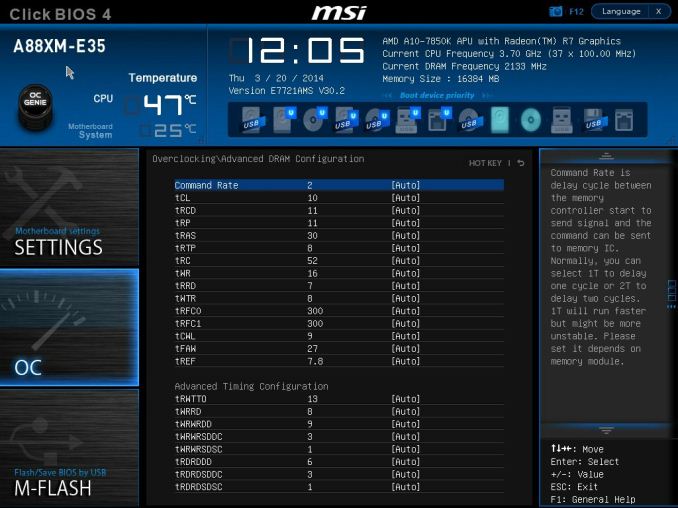 The cTDP option used for Kaveri APUs that have different thermal limit settings, such as the A8-7600, is found in the CPU Features sub-menu in the overclocking tab. 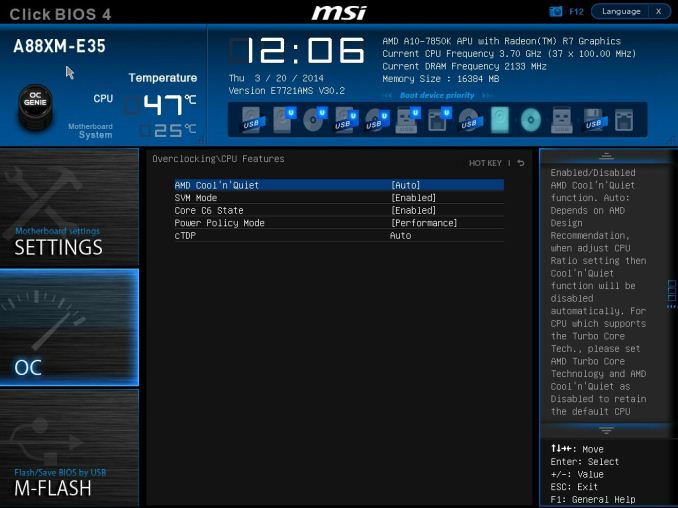 One of the features I remarked on in the last MSI Z87 review was the Hardware Monitor, offering a different take on fan controls. It appears here on the A88XM-E35, and allows users to adjust the points on the fan gradient and see a graphical representation of their adjustment. The BIOS states ‘fan speed’ but actually means ‘fan power’, and power is not directly proportional to speed. As noted in previous reviews, some fans will have a minimum speed up until a power %, or not enable until a power percentage %. This is still an inaccurate representation of the physics behind fans, but the graphical representation is a step in the right direction. 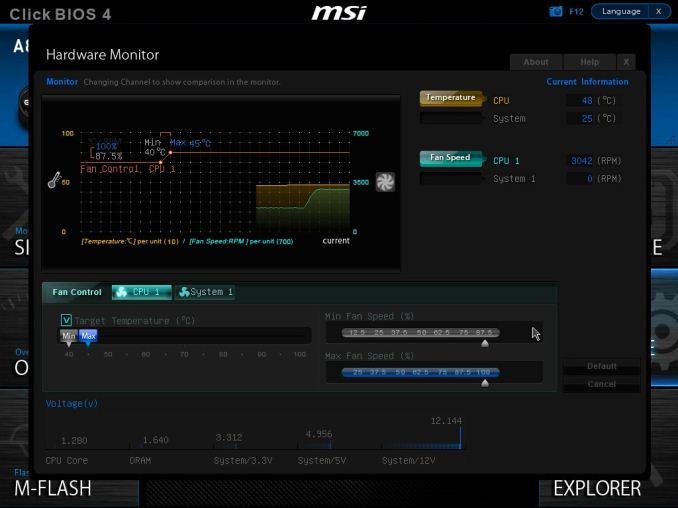 The final part of the BIOS is the Board Explorer, a feature now exhibited on several motherboard manufacturers’ products. It shows a top down image of the motherboard and several areas that the user can mouse over to see what is installed. This is useful for determining if a stick of memory is not working, or if a SATA device has come loose. 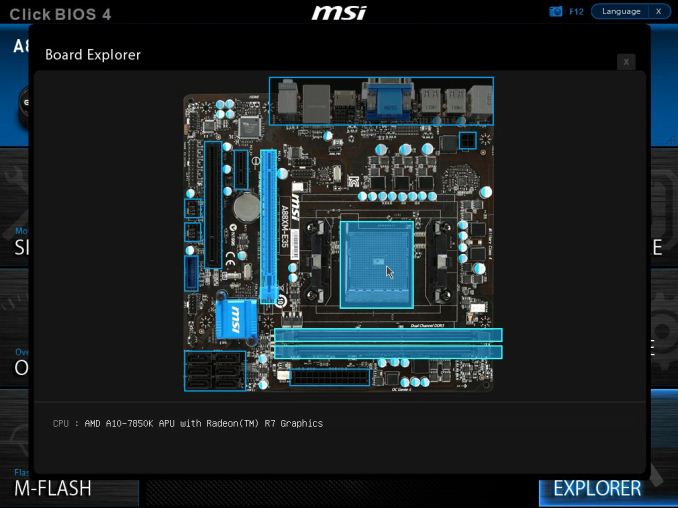