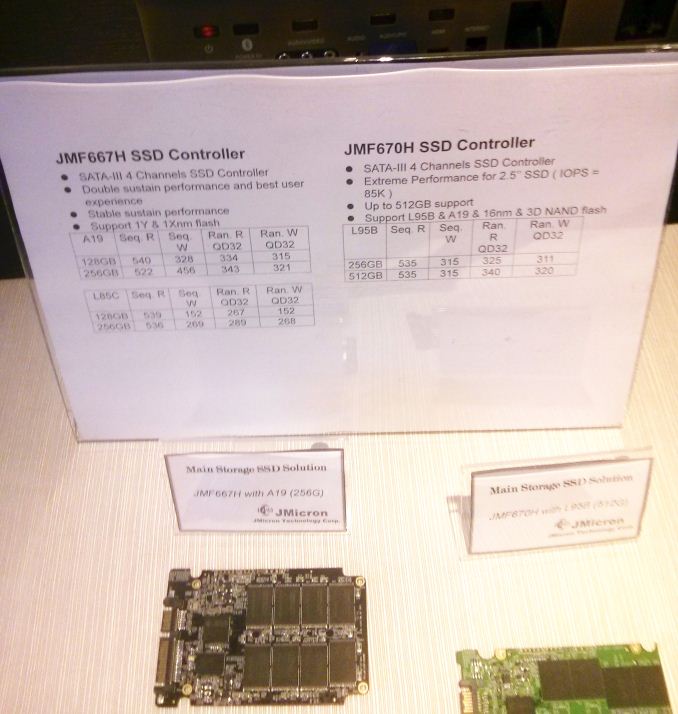 RIght before Computex, we published a review of JMicron's JMF667H reference design SSDs. I was positively surprised by the capability of the JMF667H platform and was eagerly looking forward to seeing what JMicron had planned for the future. A visit to their suite revealed plans for several new controllers including both SATA 6Gbps and PCIe solutions.

The JMF670H is the new high-end controller set to replace the JMF667H we reviewed earlier. The JMF670H solves one of the issues I had with the JMF667H by including support for capacities of up to 512GB. The JMF667H was limited to just 256GB, which in my opinion is a bit lacking nowadays, even though it still caters the majority of the market. While I would have liked to see support for 1TB or more, I see the reasoning to focus on the more popular smaller capacities. Adding support for more NAND is actually quite tricky because doubling the capacity means that the controller now needs to keep track of twice as many pages/blocks, which may not be efficient if the NAND mapping table and firmware design in general is not suited for that.

The JMF670H is still a 4-channel design similar to the JMF667H but brings better NAND support. Micron's 16nm NAND is supported as well as 3D NAND, though unfortunately there is no support for TLC NAND. Performance seems to be more optimized for the 128Gbit NAND now because as I mentioned in the JMF667H review, the version with 128Gbit 20nm Micron NAND was a bit slow. The numbers in the picture above are with Micron's 128Gbit 16nm NAND (i.e. L95B), so it seems that the performance is almost on-par with the JMF667H with Toshiba NAND. Mass production will start next month and we should be able to get reference design samples for review around the same time as well. 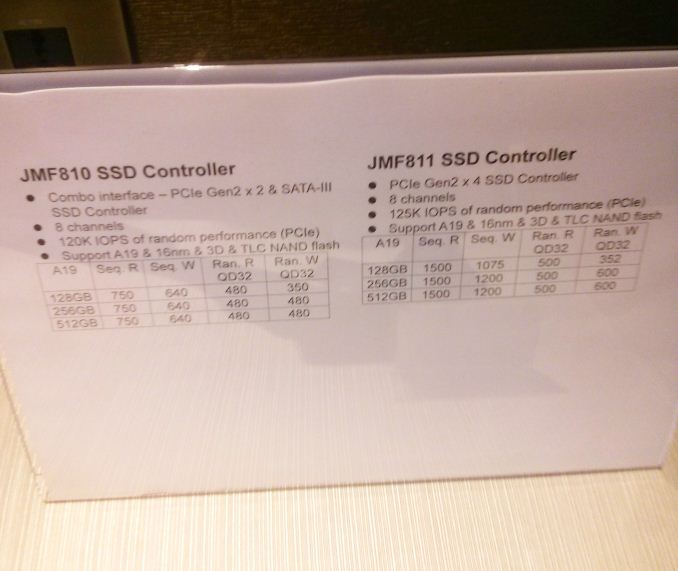 Next up are the JMF810 and JMF811. These are JMicron's first PCIe SSD controllers and are scheduled to ship Q4 this year. The difference between the two is that the JMF810 supports both SATA 6Gbps and PCIe 2.0 x2, whereas the JMF811 is purely PCIe 2.0 x4. The silicon is actually the same in both but the JMF811 is sold at a higher price due to its higher performance, which is similar to what SandForce is doing with the SF3700. Having just one silicon tends to be more cost efficient because the risks involved in silicon design and manufacturing outweigh the savings of a smaller die, especially for a fabless company like JMicron.

Design wise the JMF810/811 moves to eight channels. I think that is a must for a PCIe SSD to take full advantage of the interface because with four channels the bandwidth between the NAND and controller may become a bottleneck. Maximum capacity is limited to 512GB similar to the JMF670 but NAND support includes TLC as well. Performance figures are quire comparable to other PCIe SSDs, although bear in mind that these are design targets at this point -- JMicron didn't have a live demo or anything to show the performance yet.

I'm fairly excited about the new controllers. JMicron kind of missed the SATA 6Gbps train because their first controllers were just that bad, but with the JMF667H JMicron finally got it right. I'm looking forward to seeing how the JMF670H improves performance over the JMF667H and of course the JMF810/811 will be an interesting case too. I just hope that JMicron is able to deliver the JMF810/811 on time and do it right because it's crucial to their brand. They have had too many failed releases in the past, so they need to get it right this time to build trust and confidence among the OEMs. With the future of SandForce being uncertain, the SSD controller market needs more competitive players and JMicron has a key role in that.