When you purchase a motherboard, a quick look on the website reveals the Qualified Vendor List. This list shows all the additional components that have been certified to work in the motherboard, and a typical list includes processors and memory, with the required BIOS version in order to make that component work properly. At the end of the day, it is someone’s job to test all that hardware – imagine testing a large chunk of the memory modules and capacities available, and then multiply that testing with each motherboard that comes to market. Clearly one person and one test bench is not going to get through each motherboard in time for launch, especially if compatibility testing is more than just ‘plug-it-in’ and ‘see-if-it-works’. ASUS uses a series of stress tests to ensure that every component on the QVL test is examined in detail for compatibility. As a result, insert rows upon rows of testing equipment: 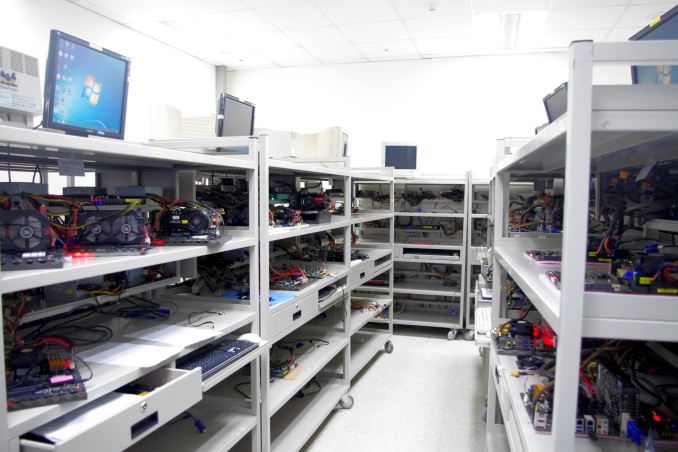 In the weeks leading up to release, each one of these racks will hold 3-4 systems per shelf with what looks like a KVM switch for control management. 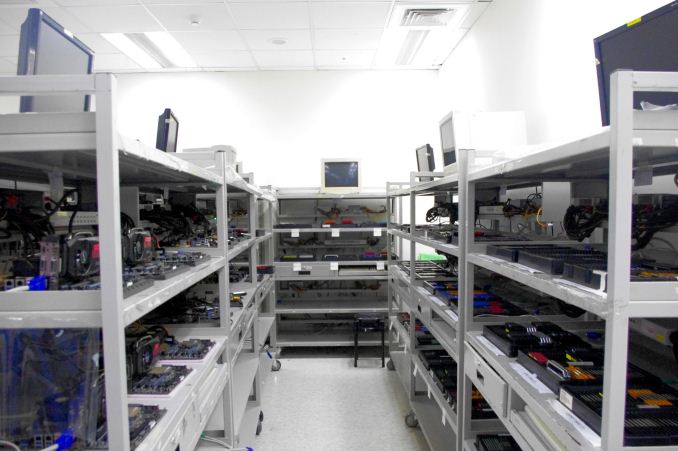 On the right here are several racks of DRAM, ranging from the regular DDR3-1333 2GB modules that were first launched with DDR3 all the way up to Apacer DDR3-3200 kits, as well as the 8x8 GB memory kits. It is worth noting that when a memory kit appears on the QVL, it means that the kit used on its own is the only thing tested – not when multiple kits (even those of the same type) are put together. ASUS ROG Admins often suggest against using two kits of the same memory in the same system, as there is no guarantee they will work together.

Over the past twelve months, most motherboard manufacturers have discussed audio testing especially in relation to the extra engineering this area of the motherboard receives. With some of the new audio features on the Maximus VII ROG motherboards for Z97, ASUS took me through their verification process. For line-out, an analog audio signal is generated and sent to their $50k Audio Precision hardware: 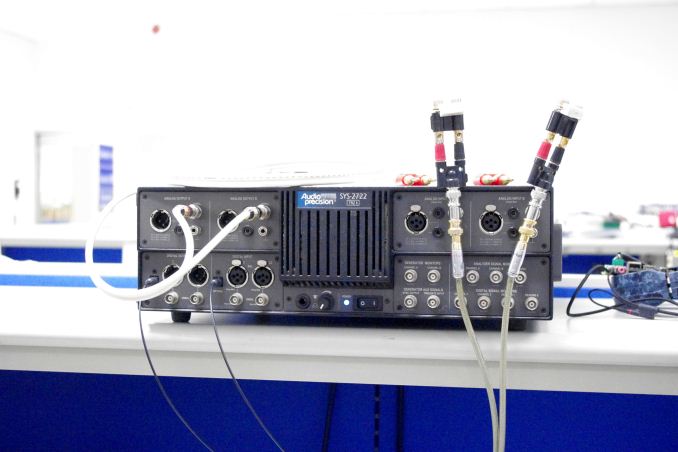 This processes the signal, compares the data to the original file, and sends the results back to the system for further analysis. With this hardware they can simulate various impedance levels of headphones to ensure that the frequency response is as accurate as possible. The reverse happens as well, testing the line-in using a digital output through the motherboard and a DAC to ensure the motherboard input is the limiting factor.

ASUS discussed some of their audio features are a bit of give-and-take, for example the frequency response at around 50 Hz with the regular codec actually drops around 5 dB.  In order to get a better frequency response at this end of the hearing range, a buffer is implemented to make the response more accurate, which has some effects on disortion and THD+N.  In order to help minimise this side-effect, some motherboards (such as the M6F) uses a pair of DACs that have a lower THD+N than the codec.  This all comes at a small expense for onboard audio due to using extra components, but this is where the extra engineering for a motherboard comes into play for product comparisons.