The software stack comes under the AI Suite 3 naming convention, where ASUS’ main play in this area comes from the Dual Intelligent Processors 5 (DIP5) interface. The dual intelligent processors part refers to the onboard EPU and TPU ICs which are an ASUS custom designed IC for monitoring and adjusting both the energy and turbo parts of the system. The 5 at the end of the name refers to both the version and the number of sub-apps within the DIP5 interface. 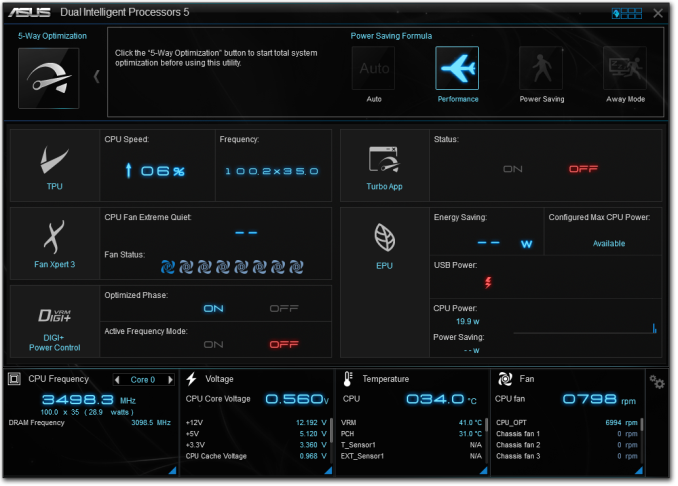 The five sub-apps are the TPU, Fan Xpert, DIGI+ Power Control, EPU and Turbo App. Alongside these is the 5-Way Optimization option that provides a series of settings to help users perform automatic overclocking. 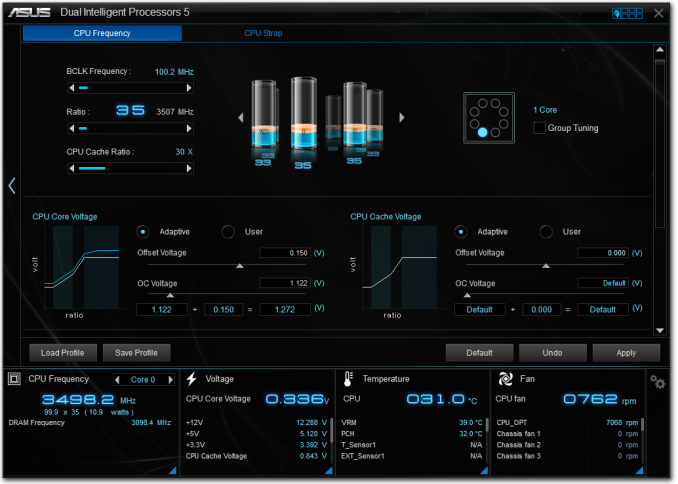 The TPU part of DIP5 offers the CPU overclock settings for ratios, base frequencies, and voltages in terms of offsets and base values. The graphs showing how the voltage adjusts with the CPU ratio are nice touches as they provide direct feedback to the user based on what they are changing. 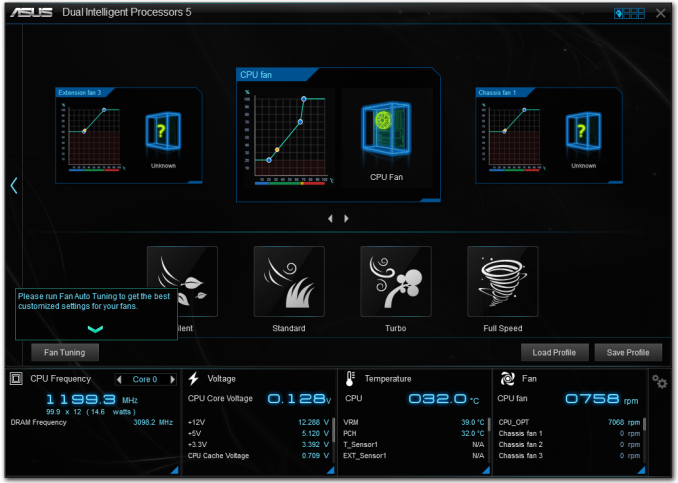 The fan settings allow users to apply a bulk fan mode to all the fans or go in and adjust them manually. The Fan Tuning button on the left provides a way for the system to analyze the characteristics of each fan attached by applying different fan power levels and measuring the RPM. 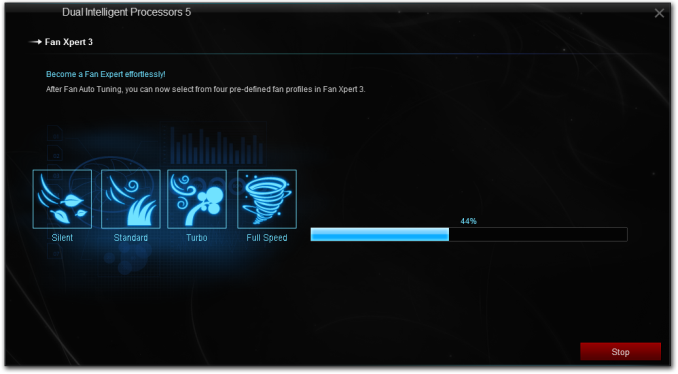 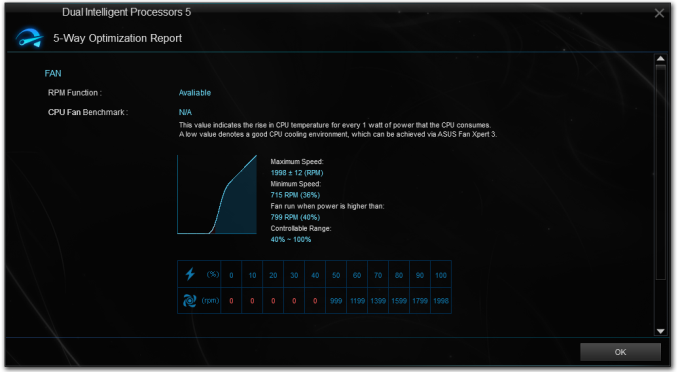 The digital power controls are for enthusiasts willing to push the system a little further. The automatic overclock options also adjust these settings slightly, giving extra CPU load-line calibration or placing the power phases into extreme performance mode. There are digital power options for both the CPU and the DRAM on hand. 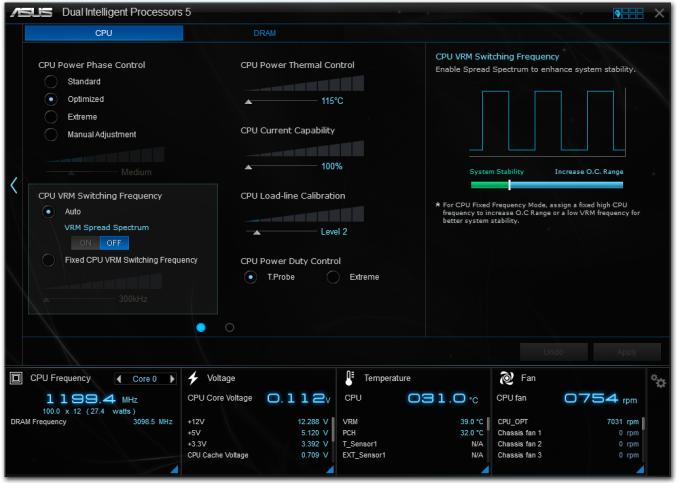 The EPU part of AI Suite allows the user to adjust what is enabled when the system is in a low power mode. This includes a target power consumption for the CPU by reducing clocks and voltage, but also by disabling fast-charging USB ports and turning down CPU fan speeds. 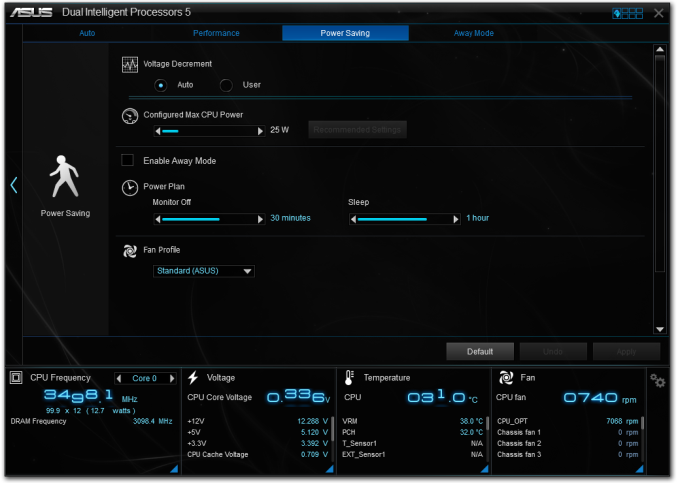 The final part of 5WO is Turbo App, which is the newest addition to the interface. This allows the user to adjust overclocks and settings depending on what software is currently loaded. This means for a linear workload, a user can have the fans turned down but the single thread speed high, or when a game is played we have a full-core overclock with fast fans and LAN priority for the game in question: 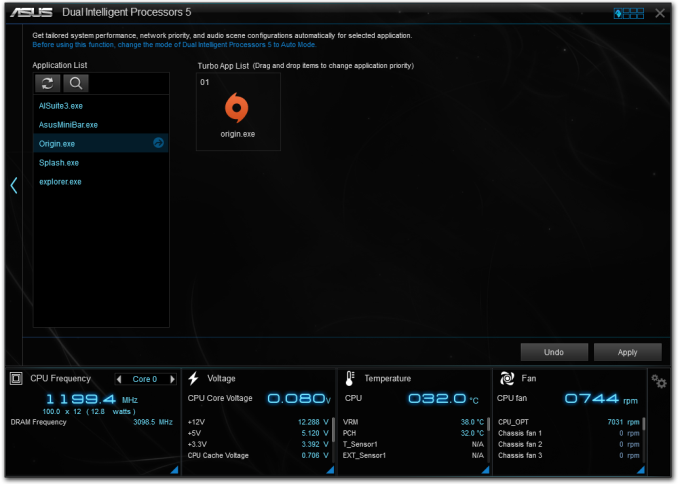 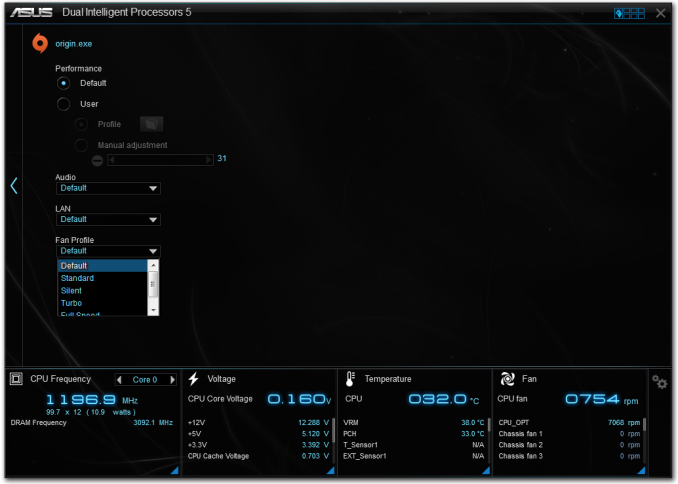 The interface allows each program to be adjusted for importance, so if two software packages are opened and both have a Turbo App profile, the settings of the more important one will take precedence. 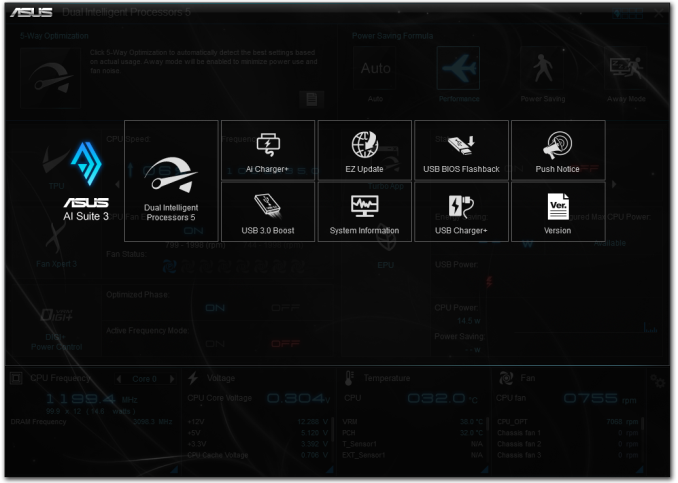 The rest of AI Suite is similar to previous generations on the mainstream platform:

One element of the software is TurboLAN, which is a reskinned version of cFos that implements software priority over the network: 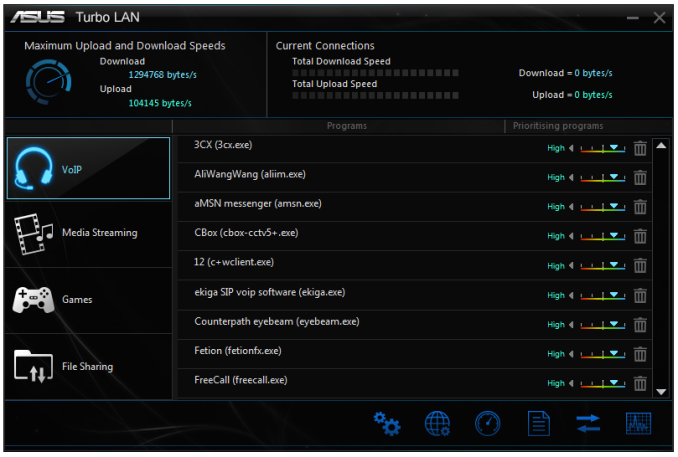 ASUS has preinstalled settings for VoIP, Media, Games or File Sharing, although users can adjust these as required.

One point I would like to request from ASUS is for the Update software to receive an update. As far as it has been part of the ASUS software ecosystem, from the UK it has only ever worked once for me. This is a system that MSI had solved a while ago, with ASRock and GIGABYTE implementing their own systems that work. ASUS is still far behind in this regard.

The software package also comes with CPU-Z in order to identify the system:

As well as Boot Setting to allow for easy entry into the BIOS or enabling Fast Boot modes: 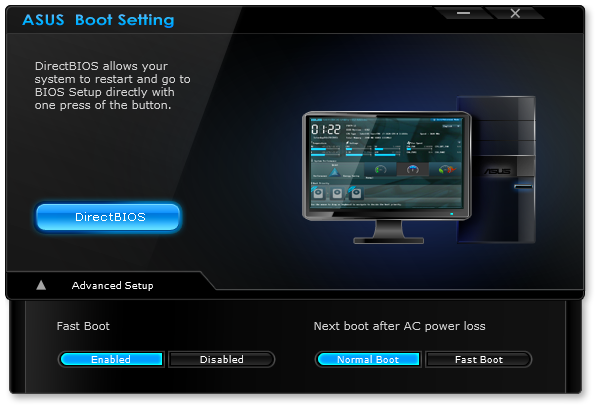