During the past couple of years we've seen a big push for better toolbox-like software for SSDs from nearly every major vendor. The reason lies in the ability to differentiate because SATA 6Gbps has already been saturated for so long and being substantially different in the performance department has become practically impossible (although that will soon change with PCIe and NVMe). As a result, the SSD manufacturers have had to seek for other opportunities that can increase the value for the customer and software has lately become one of the key aspects in doing so. (It is worth noting that the motherboard industry went through the same process, whereby most motherboards in a price bracket had a flat feature set and software became a differentiating factor. -Ian) 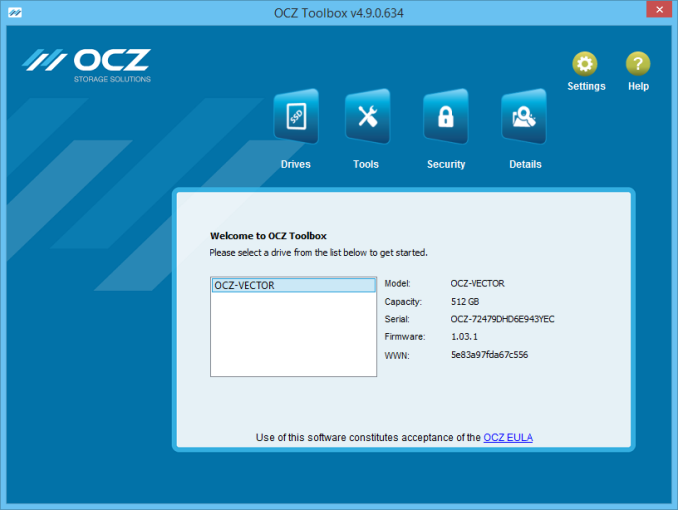 OCZ has had a toolbox for as long as I can remember, but to be honest it looked more like an engineering tool rather than something that was aimed for the end-user. It did have the critical functionality (firmware update, secure erase, SMART data), but given what the competitors have put out to the market it was certainly lacking in both features and usability. 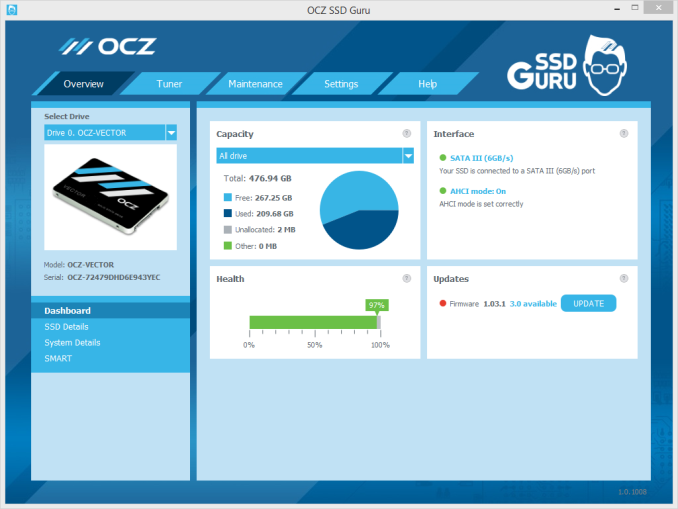 Today, along with the Vector 180 release OCZ is launching its fully redesigned toolbox called the SSD Guru. The overall design of the SSD Guru is much more user friendly and, as we've seen in other toolboxes, the welcoming screen already includes all the essential information about the drive so the user doesn't have to dig through the different tabs to find the important data.

The SSD Guru is available as both Windows and Linux installers as well as a separate bootable tool for Mac users. All Barefoot 3 based drives are supported along with the RevoDrive 350, but the older Indilinx and SandForce based drives are not (although you can still use the old toolbox if you wish). 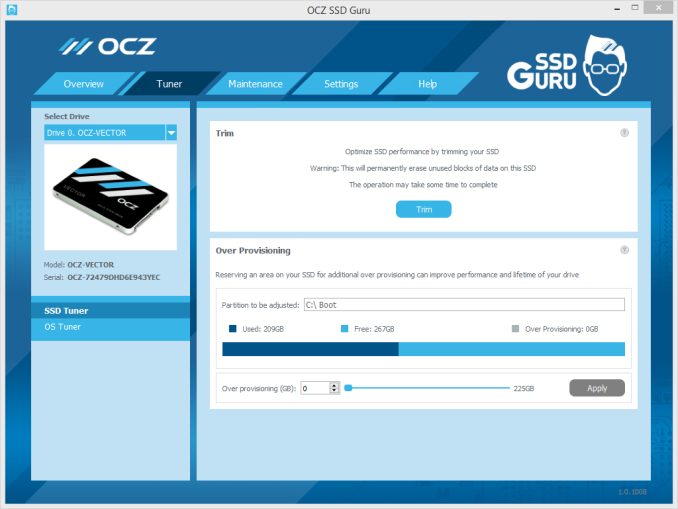 The 'Tuner' tab includes two separate functions: SSD and OS Tuner. The SSD Tuner allows the user to issue a TRIM command to the drive to erase unused blocks to improve performance (although this should be unnecessary if you are running an OS with TRIM support) and it also includes a tool for increasing the over-provisioning for further performance gains. 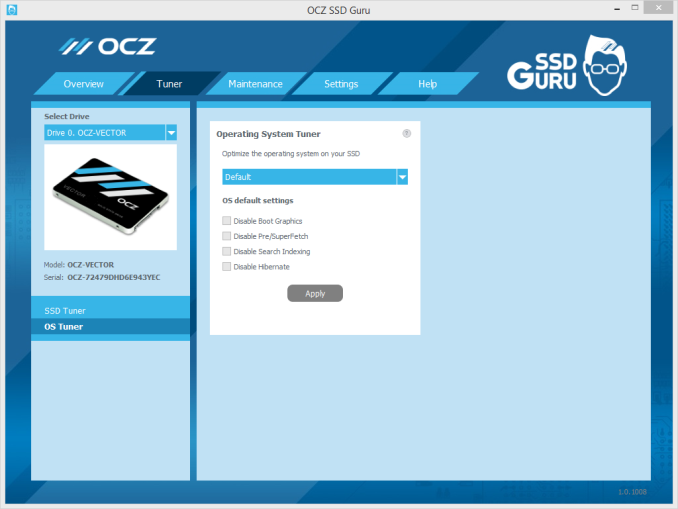 The OS Tuner includes a few basic OS features that can be disabled for higher performance and/or capacity. By default the SSD Guru does nothing, but there are three preset options (reliability, performance and capacity) that you can choose from to optimize the OS. Different settings will be disabled based on what you choose (e.g. capacity option only disabled hibernation, whereas reliability disabled all four listed in the image above), although you can also customize the settings and disable what you see fit. 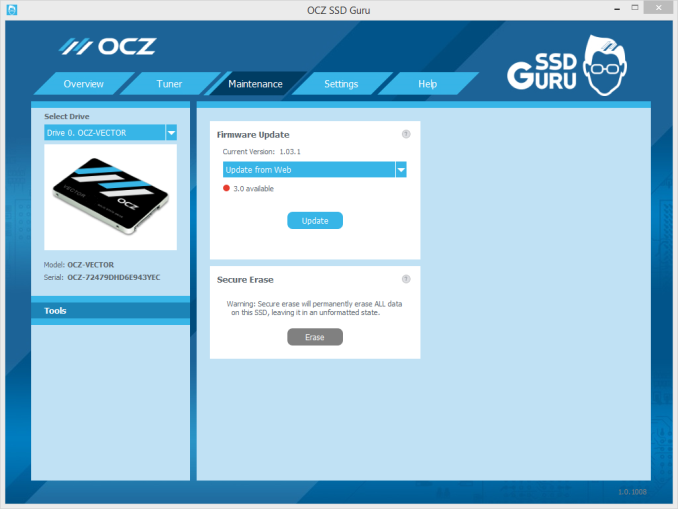 The maintenance tab has the common firmware update and secure erase functions that were also present in the old OCZ toolbox. The SSD Guru will also show a notification on the desktop if there's a newer firmware available. 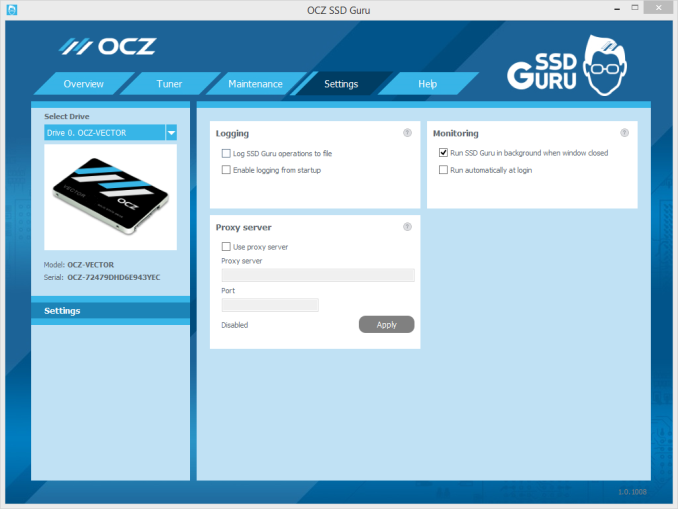 The SSD Guru also supports logging, which can be a useful feature if you ever have issues with the drive and need to contact OCZ's support. 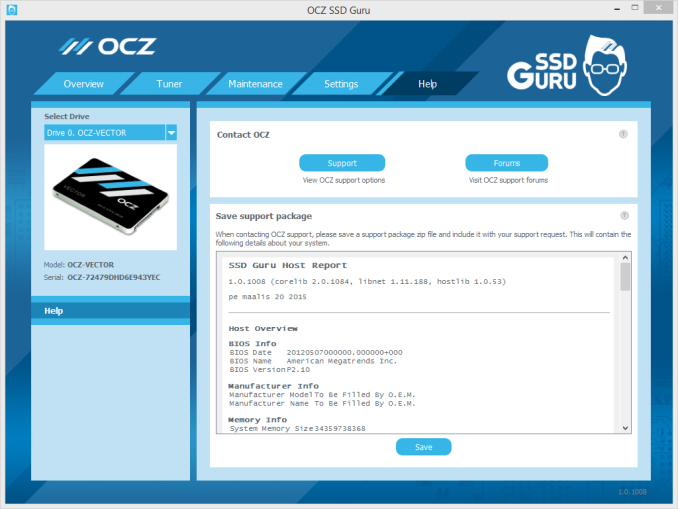 One feature OCZ emphasized is the ability to save a 'support package' that can then be sent to OCZ support if the drive isn't operating properly. The file includes a brief overview of the system with the necessary information that may be needed by the support staff for troubleshooting. 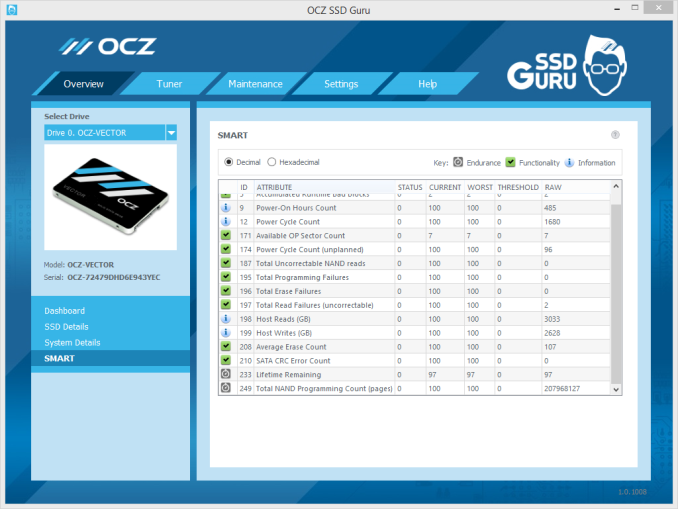 The one last cool feature of the SSD Guru is its SMART data monitor. Instead of just listing all the values like toolboxes usually do, OCZ has included three key icons that help the user to understand the purpose of each SMART value. While enthusiasts will understand the data without the keys, I still think it's a nice addition and something that at least slightly differentiates the SSD Guru from what is already out on the market.

The version that is being released today has all the core features that you would expect from a toolbox, but none of them are truly unique. Obviously, being a 1.0 release, OCZ only decided to include the most critical features to build the foundation for SSD Guru and the company already has a list of features that are under consideration for future updates (e.g. benchmarking tool). That said, I think the SSD Guru was a necessary move from OCZ in order to be considered a tier one OEM because it's an area where the company has certainly been lacking compared to the competition. I can't say the SSD Guru is special, but in the end the purpose of a toolbox is to provide easy access to the most needed SSD tools and the SSD Guru certainly does that.