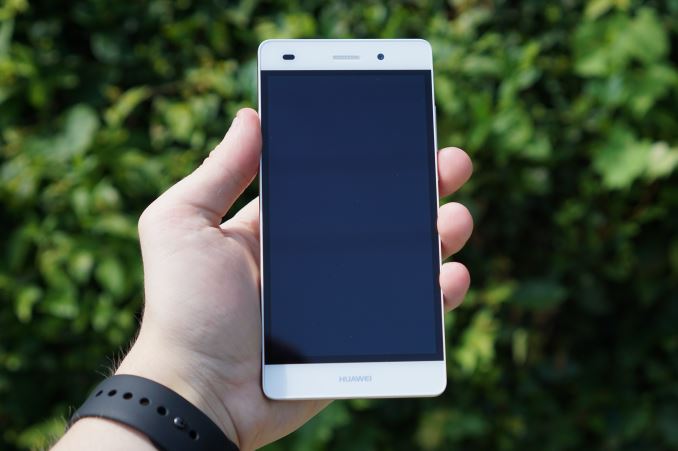 Although many consumers are not familiar with Huawei, they are a company that has been selling smartphones for quite some time now. In the earliest days of the smaller Canadian carriers Huawei was one of the few companies that had smartphones available on their networks due to their use of the AWS band for HSPA which was uncommon in other devices here at the time. While Huawei has always had one or two flagship devices and makes some phablets, to me their core market was always mid range devices. Often these mid range devices are a downsized version of their flagship devices, and the smartphone being reviewed today is no exception. It's the Huawei P8 Lite, and it's the little brother of the Huawei P8.

The P8 Lite is Huawei's device to compete in the mid $200 market. At $249, it's more expensive than a device like the Zenfone 2, but not as expensive as something like the OnePlus One. There are actually two versions of the P8 Lite depending on your market. The first uses HiSilicon's Kirin 620 SoC which has eight Cortex A53 cores at 1.2GHz, while the second uses Qualcomm's Snapdragon 615 SoC. The version being examined during this review is the Qualcomm edition, and you can check out the rest of its specifications in the chart below.

On paper, the P8 Lite sits right in the mid range segment of the market. Inside it has Qualcomm's Snapdragon 615 SoC, with two clusters of four Cortex A53 cores and their Adreno 405 GPU. Other internal specs include 2GB of RAM, 16GB of internal storage, an 8.36Wh battery, and 802.11n WiFi. On the outside is the 5" 1280x720 IPS display, and a pair of rear and front cameras with 13MP and 5MP resolutions respectively.

On the software side we see that the P8 Lite is only shipping with Android KitKat skinned with Huawei's Emotion UI. Andrei has already taken a look at the iterations of this interface on a number of occasions, and there's not much I can add to his evaluation of Emotion UI 3.0 from his review of the Ascend Mate 7 so I'll simply link that here for interested readers. The underlying version of Android being KitKat is definitely disappointing when the P8 Lite is being sold in July of 2015 with Android M on the horizon, and it means that the Snapdragon 615 SoC has to run in AArch32 mode. The P8 Lite and all its hardware and software comes together in a 7.7mm thick package that costs $249. 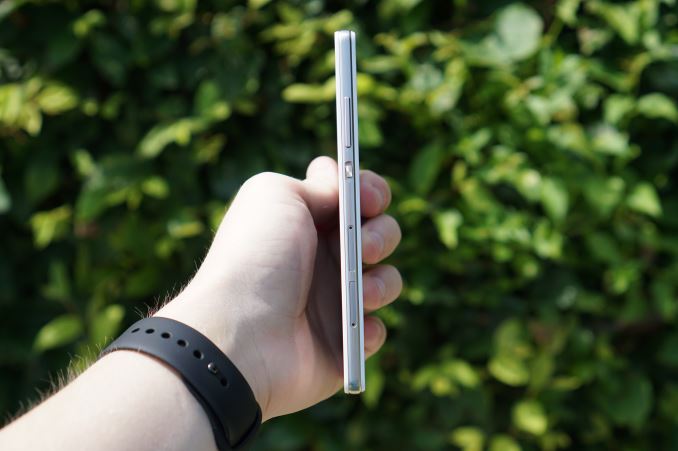 The design of the P8 Lite definitely takes some cues from the larger high end Huawei P8. The front of the phone is remarkably similar, with the same outer white bezel surrounding a black bezel around the display. On the top bezel we have the earpiece, front-facing camera, and the proximity sensor. On the bottom is nothing but Huawei's name, as the P8 Lite uses onscreen navigation buttons. As far as differences from the P8 go, the black bezel around the display is thicker on the left and right sides, and the camera and earpiece have more spacing between them and the earpiece.

While the Huawei P8 has an aluminum chassis, the P8 Lite is very clearly made of plastic. The sides and rear of the phone are significantly different from the P8. To add a bit of flare to the plastic chassis Huawei has added a plastic band that attempts to mimic the appearance of metal. From the side it kind of reminds me of an ice cream sandwich due to the two outer layers of the same color and a different inner layer. Huawei has also put their power button, SIM slot, and microSD slots on the right side in the same fashion as the P8. While some people might like the metal appearance of the outer band, I'm not really a big fan. When making a plastic device you either need to own it and use it to your advantage like Nokia/Microsoft does with their Lumia devices, or you need to make it look very convincing like the back cover of the Zenfone 2. In the P8 Lite's case it still looks very much like plastic, and reminds me of the fake chrome on the bezel of my Galaxy S i9000. 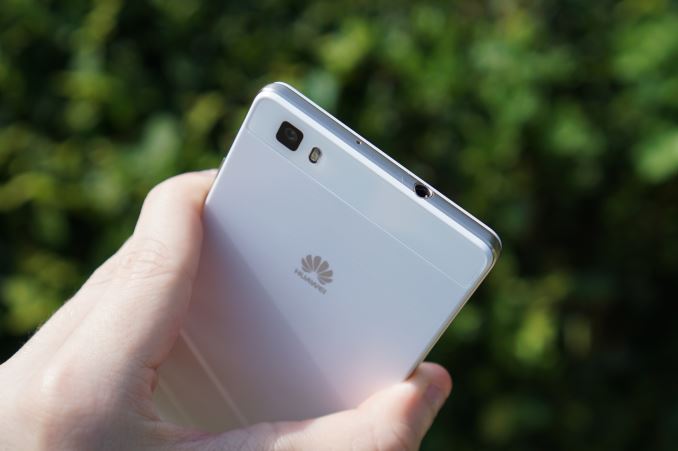 The back of the P8 Lite has two segments. At the top is a glossy thin strip which holds the rear-facing camera and LED flash on the left side. Everything below is a more textured plastic, with horizontal lines running across it. As far as construction goes, there's not really any flex or give to the back cover, and the texture created by the lines makes it feel different in the hand than a device like the Moto E or Moto G.

My opinion of the P8 Lite's design and build quality is somewhat divided. It has a good feel in your hand, and there's no flex or anything that would suggest weakness. On the other hand, I really don't like the faux-metal band around the edge of the phone. Trying to mimic brushed aluminum with plastic is always going to backfire, and I think Huawei would have been better off just making the sides white like the rest of the chassis.