Patriot Memory has been selling solid-state drives for about eight years now. To date, virtually all of Patriot’s SSDs have used the Serial ATA interface, which became a performance-limiting factor in the recent years. At the Consumer Electronics Show this week, Patriot finally announced its first SSDs with the PCI Express 3.0 x4 interface. The new Hellfire solid-state drives will be available for purchase at the end of the first quarter.

The Patriot Hellfire SSDs are based on the Phison PS5007-E7, which is an eight-channel controller that supports the NVMe revision 1.20 protocol, the PCI Express 3.0 x4 interface as well as various types of NAND flash memory. The PS5007-E7 controller features error correction with 120-bit/2KB BCH code along with all the modern functionality, such as NVMe L1 power sub-states, power failure protection, end-to-end data path protection, an AES-256 engine, advanced global wear-leveling and so on. The Patriot Hellfire solid-state drives use MLC NAND flash memory, but the manufacturer yet has to reveal its exact type. 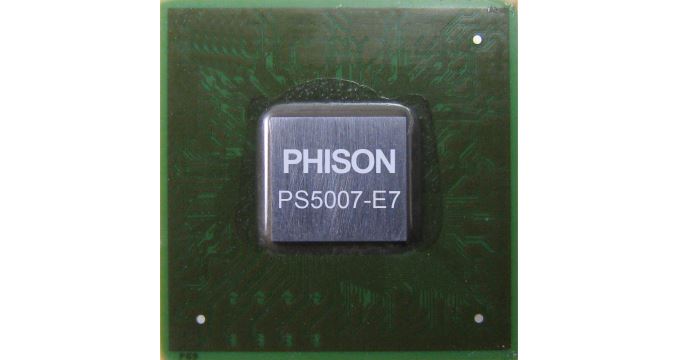 One of the reasons why the Hellfire SSDs in different form-factors offer different levels of performance despite of the same controller and logical interface is because the Phison PS5007-E7 controller cannot use all of its channels on an M.2 2280 card. It should also be noted that Phison’s reference M.2 2280 SSD with the PS5007-E7 ASIC (application specific integrated circuit) only supports capacities up to 512 GB.

Patriot will not be the only company on the market to offer high-performance solid-state drives based on the Phison PS5007-E7 controller. Phison sells its chips along with reference designs to actual makers of SSDs, so expect multiple companies to use the PS5007-E7 inside their high-end SSDs in 2.5-inch, M.2 and AIC form-factors. For example, G.Skill demonstrated its PS5007-E7-based Phoenix Blade X SSD at Computex 2015 about six months ago.

According to Patriot, its Hellfire PCIe AIC SSD will offer performance that will be higher than that of Samsung’s 950 Pro, which is one of the fastest solid-state drives today. If other producers manage to design SSDs with similar performance based on the PS5007-E7 ASIC, it will be a huge step forward for the whole market.